Deputy Prime Minister Dmitry Kozak said Thursday that there had been no misuse of funds allocated for the upcoming 2014 Olympic Games in Sochi, with only 99 billion rubles from the overall price tag of 214 billion rubles taken out of the state budget.

News reports had earlier put the total cost of the Sochi Games at $51 billion, making them the most expensive games in history. The large amount was repeatedly slammed by observers, with critics saying corruption schemes had allowed officials to siphon money off during construction works for Olympic facilities.

Kozak, however, said checks conducted by both the Audit Chamber and the Federal Financial and Budgetary Supervisory Service did not reveal any violations, and that the International Olympic Committee was fully satisfied with how Sochi prepared to host the Winter Games.

"There is not a single complaint concerning facilities, infrastructure, or medical support; everyone is satisfied. All works that were conducted to meet the needs of the national teams have been completed," Kozak told reporters, Interfax reported.

He acknowledged that there had been some unnecessary expenditures but said they were insignificant, such as a need to move a bobsleigh track at the request of environmental activists.

Krasnodar region Governor Alexander Tkachyov said that 182 billion rubles had been allocated for Olympic infrastructure from the regional and Sochi budgets, most of which was spent on repair work for medical and other public facilities.

Such statements come in contrast to accusations made by critics as recently as last week.

A Swiss member of the International Olympic Committee and president of the International Ski Federation, Gian-Franco Kasper, last week accused Russian authorities of embezzling one-third — or about $18 billion — of the funds allocated to prepare for the Olympics in Sochi.

Russian opposition politicians Boris Nemtsov and Leonid Martynyuk gave an even higher estimate in a report they published last spring, saying that between $25 billion and $30 billion had been embezzled.

Prime Minister Dmitry Medvedev, speaking at a government meeting on Thursday, shared Kozak's optimism about the upcoming Olympics, however.

Medvedev said he was satisfied with the current state of the Olympic facilities, and that "basically" all of them were functioning.

Twenty-one days remain until the beginning of the Olympic Games, which will start on Feb. 7 and run through Feb. 21.

"In December and January, I personally checked a number of the Olympic venues located both on the coast and in the mountains. Most of them are ready," Medvedev said. 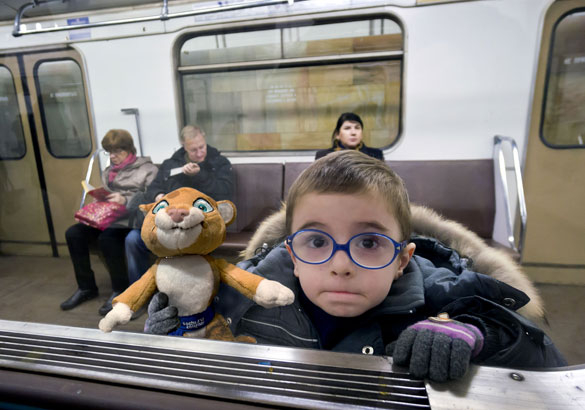 A boy showing off a stuffed animal bearing the Sochi Olympic logo as he peers out from inside a train car in the metro.

According to Housing Minister Mikhail Men, 309 of 363 Olympic facilities have already been put into service, while official permissions are still required for 43 other facilities. Men did not specify what the state of the remaining 11 facilities was.

He said that 11 of 13 venues had already been put into service and two — a complex for skiing competions and biathlon and a complex of ski jumps — were also waiting for necessary documents so that they could be used.

In his report, he did not mention the Fisht Stadium, the one facility that has provoked concern from the public after the deadline was repeatedly pushed back. Fisht Stadium, which is set to host both the opening and closing ceremonies, has not yet officially been opened, and speculation lingers about whether it will be completed on time.

Sports Minister Vitaly Mutko expressed confidence on Thursday that everything would be ready, however.

"The guarantees that the government made concerning preparations for the Olympics have mainly been fulfilled and meet the requirements of the International Olympic Committee," Mutko said.

He added that final preparations for the opening and closing ceremonies were currently under way.

Meanwhile, President Vladimir Putin promised to make the Olympics a "large sports celebration" and said there would be no discrimination during the Olympics.

"We are expecting more than 6,000 athletes from 85 countries of the world and hundreds of thousands of visitors," he said Thursday while delivering credentials to foreign ambassadors in the Kremlin, Interfax reported. "We are doing absolutely everything to make this a sports festival not only for people in our country but also for sports fans all over the world."

According to Mutko, some 230 Russian athletes will compete in Sochi, 218 of whom have already been selected for the Games. The final lineup of the Russian Olympic team will be announced by Jan. 23, he said, and that of the Paralympic team — by Jan. 29.

Sochi is due to host some 213,000 visitors, 75 percent of whom are Russians, head of the Sochi Organizing Committee Dmitry Chernyshenko said. More than 70 percent of tickets have already been sold, he said, but there are tickets reserved for those who decide to go to the games at the last minute.

Six workers fell off a roof at the bobsled center for the upcoming Winter Olympics in Sochi when the snow they were clearing slid to the ground.

Associated Press technicians who witnessed the fall Thursday said one of the men appeared to have injured a leg and was taken away on a stretcher, while others sustained minor injuries.

The men were clearing snow at the Sanki Sliding Center, which will host the bobsled and luge events at next month's games in the Russian Black Sea city.

The AP technicians said the workers appeared to have been harnessed to the building, but slid down with the snow. They estimated the roof was 10 meters high.