A suicide bombing at a Volvograd train station packed with New Year's travelers on Sunday has killed at least 18 people raising new security fears only six weeks before the start of the Sochi Olympics.

The bombing, the second in Volgograd in as many months, sent shock waves through this southern city and put residents in a "panic," said an adviser to the regional governor.

The explosion rocked a crowded area between the train station's front doors and the metal detectors leading into the main hall around 12:45 p.m. Sunday. The central station was filled with holiday passengers and especially crowded because several trains were running behind schedule.

The suicide bomber detonated a shrapnel-packed belt as a police officer approached a suspicious-looking woman nearby, officials said. Because the explosion occurred as the woman was approached, investigators initially thought that the woman was the bomber.

"Surviving police officers say they responded to a woman who looked suspicious," a law enforcement official told Interfax. "After one of the officers tried to approach her, there was an explosion."

But a review of camcorder footage from the attack showed a man at the epicenter of the explosion, the official said. A male finger holding a grenade pin was also found at the scene, he said.

Fourteen people, including police Sergeant Dmitry Makavkin, 29, died in the explosion, which contained the equivalent of at least 10 kilograms of TNT. Three people died later of their injuries in the hospital.


Forty-five people were hospitalized, including two chidlren aged 9 and 14.

Initial reports had put the death toll at up to 18 until a second blast on Monday morning caused at least 10 more casualties when an explosion ripped through a trolleybus.
Volgograd Governor Sergei Bozhenov on Monday declared a five-day mourning for the dozens of people who were killed in the two bombing attacks in the city over the past two days.

The mourning period began on Monday and will continue through Jan. 3, Bozhenov told reporters at the site of the Monday trolleybus explosion, Interfax reported. 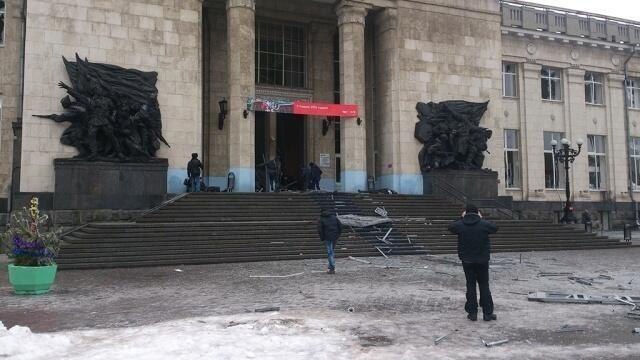 The train station in a photo tweeted by Channel One journalist Alexei Poltoranin. (@Poltoranin / Twitter)

The two bombings in two months have left Volgograd residents in a panic, said Kazbek Farniyev, an adviser to Volgograd's governor.

"The city is in a panic. Only two months have passed, and again we have a terrorist attack," Farniyev said on Dozhd private television.

A 30-year-old female suicide bomber carried out a blast on a Volgograd public bus in October. That attack, staged by a Dagestani militant's wife, killed six people and injured 37 others.

Farniyev said no one was blaming the North Caucasus but instead wondering why law enforcement agencies weren't able to prevent the attacks.

"We are simple people," he said. "Only the law enforcement agencies can somehow prevent this from happening."

Investigators initially identified Sunday's attacker as a woman, and as the day wore on announced that she was Oksana Aslanova, a friend of Naida Asiyalova, the October suicide bomber. They said Aslanova had twice been married to Dagestani militants.

But late Sunday the investigation into the female suspect was put aside in favor of the male suspect. An unidentified security official told Interfax that the bomber had been identified as a man with the surname Pavlov and he had a Slavic appearance.


Security camera footage of Sunday's blast, posted on YouTube, shows a ball of flames light up the glass entrance of the gray building as the bomb goes off. Smoke then pours out of its front doors and upper window.

Eyewitnesses spoke of panic and confusion at the train station.

“A tremendous explosion went off about 40 minutes ago. It was immediately clear that people were scared: Some ran away, others were thrown by the shock wave,” Valentina Petrychenko, who works at a train station kiosk, told Rossia 24 state television.

“Emergency workers, paramedics and firefights quickly arrived from all directions,” she said. “You could see people lying on the stairs near the entrance. The door also was knocked down and lying there.”

The governor's office said the families of those who were killed would receive 1 million rubles ($30,680) each in compensation.

Volgograd, which has a population of 1 million, is located about 700 kilometers northeast of Sochi, where the Winter Olympics will open on Feb. 7. More than 3,500 passengers pass through the train station daily, with traffic swelling ahead of major holidays like New Year's Eve next Tuesday.

Militant attacks have largely been confined to the Muslim-dominated republics of the North Caucasus near Sochi. But October's attack in Volgograd raised the specter that they might creep into other parts of Russia as well.


In an online video in July, Chechen rebel leader Doku Umarov called on the insurgency to use "maximum force" to stop the games from taking place.


A car bomb in the southern city of Pyatigorsk on Friday killed three people. Investigators say that explosion was not a terrorist attack.

Russian authorities have stepped up security measures in advance of the Olympics and offered assurances to athletes and visitors that the games will be safe.

The Interior Ministry said Sunday that security would be further increased at train stations and airports. 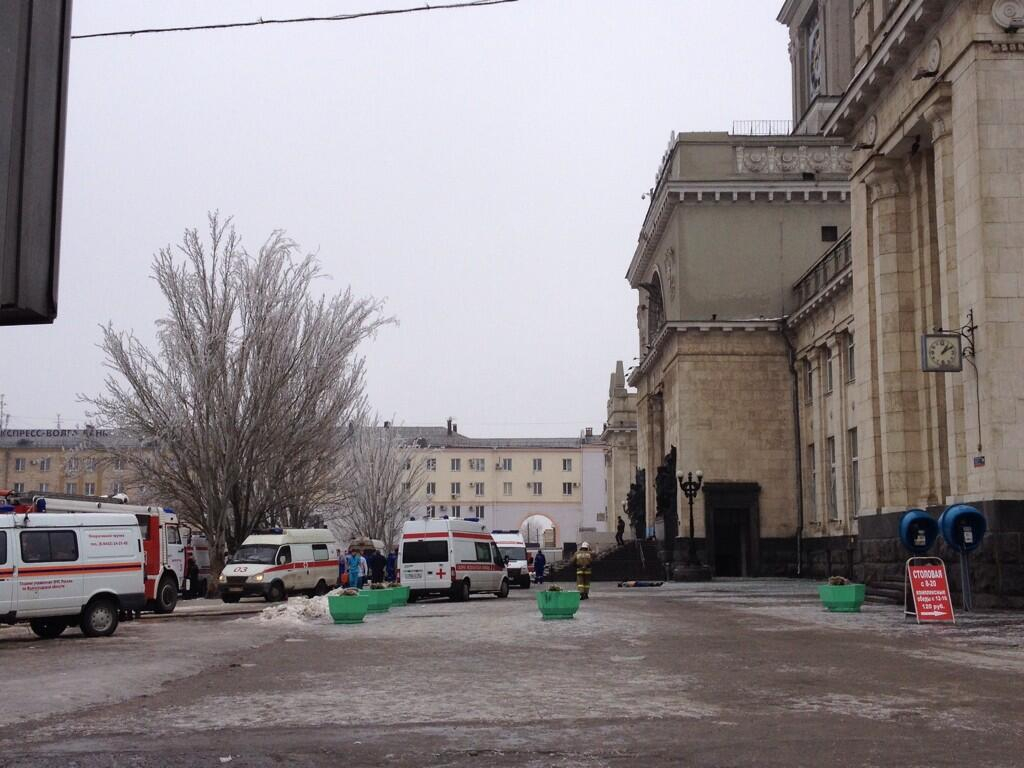 The scene at the Volgograd train station after the blast Sunday. (Nikita Baryshev / @n_baryshev / Twitter)