It came as a shock for both those released and the general public: President Vladimir Putin's move to pardon his foes has allowed him to seize the news agenda in his favor and temper criticism of his rule less than two months before the Sochi Games.

Putin is dribbling out a headline day after day in the media and seems to be controlling the message. First, Mikhail Khodorkovsky was released after a decade in prison, then Pussy Riot activists were pardoned and now 30 Greenpeace activists are awaiting their turn.

The abrupt move by Putin to release his adversaries mixed the elements of an astute spin effort with a crude KGB-style operation. The pardons could help repair some of the damage to Russia's image before the Winter Olympics, which run Feb. 7 to 23, but it does not ease tensions with the West over Ukraine and other issues, including gay rights, and keeps tight Kremlin control over Russia's political scene unchanged.

No one in Russia expected Putin to release Khodorkovsky, his arch-foe and once Russia's richest man, after more than a decade in prison.

In fact, most observers felt pretty certain that authorities would file another set of criminal charges against the former oil tycoon to prevent him from walking free after serving his term.

A one-time Kremlin insider, political consultant Gleb Pavlovsky, saw the gloomy expectations as part of a carefully choreographed performance ending with Khodorkovsky's surprise release and his swift move to Germany. 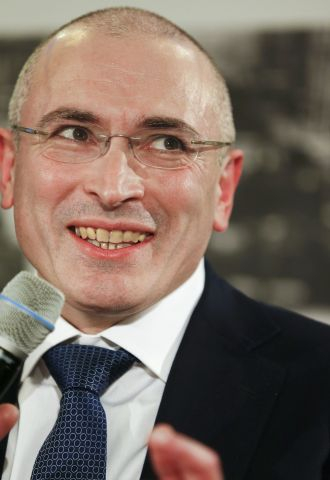 "It is quite obvious that it was timed for Christmas," Pavlovsky said. "Putin has turned it into a big European and global show."

Putin announced his decision to pardon Khodorkovsky as he was walking out of a four-hour news conference in response to a question from a Kremlin-friendly news outlet. If he did that at the news conference, it would have diverted attention from other subjects and spoiled the show.

Khodorkovsky told the media in Berlin that Putin's statement came as a surprise to him, even though he had submitted a request for a pardon on German advice. A few hours later, he was taken from his bunk in the middle of the night, flown away from prison in a helicopter and put on a Germany-bound private jet.

Some compared Khodorkovsky's release to the expulsion of dissidents during Cold War times, when Putin served as a KGB officer.

One motive behind the secretive effort could be a desire to prevent Khodorkovsky from making a triumphant exit from prison to dozens of television cameras — something the KGB also tried to do when they quickly and quietly escorted foes of the Soviet regime out of the country.

Khodorkovsky's release topped the news for several days. Then, on Monday came the turn of the two members of the Pussy Riot punk band, who were serving a two-year term for an irreverent protest against Putin at Moscow's main cathedral in February 2012. The two women did not receive the same secretive treatment that Khodorkovsky had.

One of them, Maria Alyokhina, was put in a prison chief's car that drove her to the railway station in the city of Nizhny Novgorod. Instead of taking the train to her native Moscow, Alyokhina just walked away from the station to the office of a local nongovernment organization.

Another band member, Nadezhda Tolokonnikova, who was released from prison in the Siberian city of Krasnoyarsk, went to her grandmother's home there after briefly speaking to journalists.

"They were released at a speed unseen in a clumsy Russian prison system," said Stanislav Belkovsky, a Moscow-based political analyst who had close links with the Kremlin in the past. "There must have been a strict order to do it quickly."

Next on the list is the 30-member crew of the Greenpeace ship Arctic Sunrise, who spent two months in jail for a protest outside Russia's Arctic oil platform. They are waiting for a stamp in their passports to be able to leave Russia, something expected within days.

The timing of the amnesty was carefully chosen to prevent Putin from looking as if he caved in to pressure. For many years, the Kremlin has ignored calls at home and abroad for Khodorkovsky's release, and it has likewise stonewalled protests against jailing Pussy Riot from some of the world's leading musicians and renowned public figures.

The amnesty came at a moment when few expected it. By pardoning his most visible foes and critics, Putin removes some of the most visible irritants in Russia's relations with the West that threatened to stain the Olympics, his pet project.

But other problems continue to mar Russia-West ties. Putin's efforts to block Ukraine's pact with the European Union have caused dismay in both Brussels and Washington. The Kremlin law banning the "propaganda of nontraditional sexual relations," which activists and Western governments have denounced as discriminatory against gays, remains and will continue to draw protests in the run-up to and during the Olympics.  Putin has shown no intention to rescind the law that he cast as a necessary part of efforts to shore up Russia's traditional values.

And other repressive laws, rubber-stamped by the Kremlin-controlled parliament after Putin's election to a third term, also stand. In response to mass protests in Moscow against Putin's rule, legislators sharply hiked fines for participants in unauthorized protests and imposed new tight restrictions on nongovernmental organizations, which the Kremlin sees as an outlet of Western influence.

"The government wants to show mercy, but if someone else challenges the government on issues that it considers important, it will show no clemency," said Alexei Makarkin, a deputy head of the Center for Political Technologies, a Moscow-based independent think tank. "If some businessman decides tomorrow to finance the opposition, he may share the fate of Khodorkovsky."