With the end of 2013 in sight, and with it the Netherlands-Russia year in which the two countries have been party to a series of economic, cultural and social events celebrating their long bilateral relations, one event has caused a significant amount of international interest and attention.

Hendrik Kerstens' exhibition of large-scale color photographs titled "Paula" had already been seen in Amsterdam, Brussels, London, New York, Los Angeles and Latin America before it arrived in Russia, but that did nothing to dim the enthusiasm with which it has been met.

With work in the collections of the Santa Barbara Museum of Art and Gemeentemuseum in The Hague, to name but a few, Kerstens' reputation preceded him. His latest work, which is now on view in the Erarta museum in St. Petersburg, follows on the heels of well-received exhibitions at the Yekaterina Cultural Foundation in Moscow, Nizhny Novgorod and Yekaterinburg.

Born in The Hague in 1956, Kerstens' work is celebrated for its alchemical admixture of the arts of photography and painting. For nearly two decades, he has documented his daughter Paula's life thorough photographic portraits.

Beginning his project with portrait photography, since 2008 he has placed her in more constructed settings that reference Dutch painting from the 17th century. Bringing to mind the paintings of Rembrandt, Vermeer and Hals, Kerstens emulates the traditional style of the most famous artworks of the period as an ode to the golden age of Dutch painting, elevating the humble family portrait to luminous new heights.

The relationship between Dutch painting and photography has long been pondered, with Johannes Vermeer said to have employed a camera obscura. The clarity of the portraits by the Dutch painters of the golden age and their sensitive use of light make them the perfect reference for contemporary photography.

Rather than slavish imitation, Kerstens' recreation of Dutch painting also includes references to contemporary life. The photographer's slyly humorous, almost tongue-in-cheek approach to his sources and the sheer breadth of the project address issues of seriality, time and identity, while emotionally they speak to his love for his child and their ongoing collaboration. 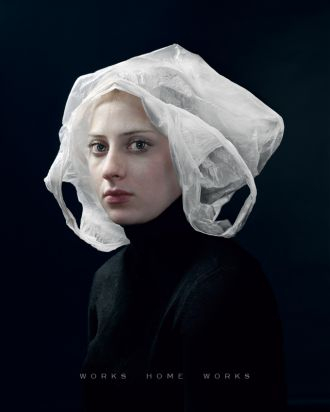 "The thing that fascinates me in particular is the way a 17th-century painting is seen as a surface that can be read as a description of everyday life as opposed to the paintings of the Italian Renaissance, which usually tell a story. Northern European painting relies much more on craftsmanship and the perfect rendition of the subject. The use of light is instrumental in this," Kerstens has said of the project.

By dressing his daughter in plain, modern clothing and having her don slightly abject — or at least common — contemporary objects, such as plastic bags, paper doilies, lampshades and aluminum foil, that are then fashioned into hoods, collars and hats reminiscent of 17th-century fashion, Kerstens comments on both the past and the present of fashion.

Staring intently at the camera, Paula's fair complexion and large, inquisitive eyes are revealed in the serene portraits created by her father. Presented as an "allegory of the Eternal Female" in a modern setting, she is a contemporary answer to Botticelli's "Birth of Venus" or Vermeer's "Girl with a Pearl Earring," merging the quintessential nuances and complications of femininity with that of painting — desired yet inaccessible, present yet unknowable.

The use of this strategy invites the viewer to look more closely at both contemporary life and art.

Kerstens began his career in 1995 and is self-taught in the art of photography. His collection of photographs documenting Paula's life as she grew up was, and continues to be, his only major series.

What began as a paternal impulse to preserve moments from his daughter's life soon turned into a long-term typological project, which consequently won Kerstens the Taylor Wessing Photographic Portrait Prize from London's National Portrait Gallery in 2008.

Kerstens' primary desire to capture the fleeting moments of childhood, such as Paula's sunburn or her first swimming lesson, was transformed when he saw her after a horse-riding lesson in a hairnet, a vision which united his loves of Dutch painting, photography and his daughter.

The project has already achieved international fame and recognition, with Paula's face inspiring artists as diverse at Elton John and fashion designer Alexander McQueen. The latter even took inspiration for his final collection on the Kerstens' portrait of Paula, "Bag," with the image appearing on the invitation for the designer's last show in September 2009, barely six moths before he committed suicide.

Kerstens' pictures have also been published in American Photo and The New York Times Magazine, with the image that started it all, "Hairnet," being used as the cover image for the catalogue of "About Face," an exhibition at Pier 24 in San Francisco that focused on the traditions of portrait photography.