Former oil tycoon Mikhail Khodorkovsky, who was released Friday after a presidential decree ended his 10 years of imprisonment, said from Germany on Sunday that he would not return home for fear of being unable to leave again.

Khodorkovsky, whose release was reportedly facilitated by former German Foreign Minister Hans-Dietrich Genscher during two years of talks with President Vladimir Putin, gave his first two news conferences in the Wall Museum in Berlin on Sunday.

Khodorkovsky’s appearance — just days after Putin shocked observers worldwide by unexpectedly announcing that the former Yukos CEO had appealed for pardon and would receive it “in the nearest future” — triggered a frenzy among journalists anxious to speak with him.

Putin’s announcement last Thursday of Khodorkovsky’s imminent freedom came as a surprise even to the prisoner’s own lawyers, who said at the time that they had not heard anything about an appeal.

On Friday, Putin signed the order pardoning Khodorkovsky and it immediately went into effect, freeing Khodorkovsky from the Segezha prison, located 1,200 kilometers northwest of Moscow.

The first news conference on Sunday was held for a small group of journalists and was not broadcasted live, while the second one was attended by dozens of journalists from various countries and was shown in Russia by Dozhd television.

The broadcast showed Khodorkovsky, dressed in a business suit, squeezing his way through a crowd of photographers with the help of two security guards.

Khodorkovsky, who was granted a one-year German visa, told journalists that he would not return home unless a Russian court overturned a ruling ordering him and his business partner Platon Lebedev to pay $550 million as part of their first conviction on fraud, embezzlement and tax evasion charges in 2005.

Khodorkovsky’s failure to pay the fine would allow court marshals to ban him from leaving Russia, he said, though he may need to go on trips abroad for personal matters.

“Unfortunately, I have no guarantees that if I return I would then be able to fly out again for my own personal matters, and this is a key factor for me,” Khodorkovsky said. 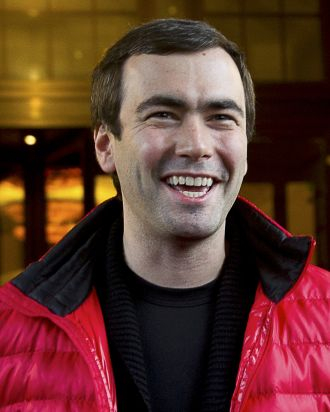 Khodorkovsky issued a statement Friday giving a brief explanation regarding his pardon request, saying: “On Nov. 12, I asked the President of Russia to pardon me due to my family situation, and I am glad his decision was positive.”

“The issue of admission of guilt was not raised,” Khodorkovsky said. “I would like to thank everyone who has been following the Yukos case all these years for the support you provided to me, my family and all those who were unjustly convicted and continue to be persecuted. I am very much looking forward to the minute when I will be able to hug my close ones and personally shake hands with all my friends and associates,” the statement posted on Facebook by his press center read.

Khodorkovsky also thanked former German Foreign Minister Hans-Dietrich Genscher in the statement for his “personal participation in his fate.”

A spokesman for OBO Bettermann, a German energy consulting firm that also runs charter flights, told The Associated Press that Khodorkovsky went to St. Petersburg upon being released from prison and got straight on a jet that was waiting for him. It was unclear how Khodorkovsky traveled from his prison colony in the Karelia republic near the Arctic circle to St. Petersburg; unconfirmed news reports earlier said he had boarded a helicopter upon being released. The Bettermann spokesman said Genscher had arranged with the company to provide the plane on Thursday afternoon after Putin’s announcement that he would soon pardon Khodorkovsky.

In his first interview after being released, Khodorkovsky told New Times magazine that his mother was currently undergoing treatment for cancer in Germany, shedding some light on the personal matters that he would be required to leave Russia for.

Although Putin said in the order freeing Khodorkovsky that the move was “motivated by principles of humanity,” Der Spiegel magazine reported Friday that Khodorkovsky’s release was facilitated by Germany’s former foreign minister during two years of talks with the Russian president in exchange for the release of two unidentified Russian sleeper agents jailed in Germany earlier this year.

With an air of mystery surrounding whatever behind-the-scenes legwork secured Khodorkovsky’s release, many questions remain about how much planning went into it. In a bizarre twist, Rosneft CEO Igor Sechin was quoted by Russian media as telling Putin in a meeting Friday that the state-owned oil giant would be willing to give Khodorkovsky a job but that “all top-manager posts are currently filled.”

Sechin also said Khodorkovsky would need to “prove his qualifications.” But media reports said Sechin was being “ironic.” Rosneft acquired most of the assets of Khodorkovsky’s oil company Yukos after it was liquidated and sold off in pieces upon Khodorkovsky’s arrest in 2003. Khodorkovsky reacted to Sechin’s comments by saying that in order to learn about his qualifications, Sechin would have to “work where I worked,” an apparent reference to Khodorkovsky’s job as a sewing machine operator in prison, the New Times reported.

Sechin’s comments, combined with the suddenness of Khodorkovsky’s pardon and release from prison on Friday, created the impression that the Kremlin had elaborately staged all the proceedings.

At least one well-known figure expressed skepticism about the situation.

“OK. Best to stop following the news — it is some kind of nonsense,” opposition leader Alexei Navalny wrote on Twitter on Friday. “I hope MBK is doing well. We will understand everything soon.”

Khodorkovsky said at Sunday’s news conference that he would not get involved in business or politics but may engage in unspecified public activities.

“I believe that in the course of my career I achieved everything I wanted — I led Russia’s second-largest oil company. I am not at all interested in repeating it,” Khodorkovsky said.

“I am not in the kind of financial circumstances where I would need to earn money,” he said. As for political activities, “the fight for power is not for me,” Khodorkovsky said, looking down.

Opposition leaders in Russia were doubtful about the sincerity of Khodorkovsky’s words, however. Edward Limonov, leader of a Just Russia, told Interfax on Sunday that Khodorkovsky’s departure was most likely a main condition for his release.

“If Khodorkovsky ever does come back to Russia, it’s possible that he will not interest anybody anymore. He made a choice in favor of his personal life, and he agreed to misfortune in politics and business,” Limonov said.

Boris Nemtsov, a leader of the RPR-Parnas party, agreed with Limonov that Khodorkovsky likely left the country as one of the conditions of his release, but said he would probably return.

“This is all temporary, of course, he will be back. I have no doubt about that,” Nemtsov said in comments carried by Interfax.

Regardless of his own future political activity, Khodorkovsky called on public activists inside the country and foreign politicians to fight for the freedom of other political prisoners like him. One such political prisoner he named was Ukraine’s jailed former prime minister Yulia Tymoshenko.

“With all my heart, I wish Yulia Vladimirovna the soonest possible release. I hope that [Ukrainian President] Yanukovych, who has been interacting with the president of my country so often lately, follows the example set by him regarding the issue of political prisoners, freeing at least one for a start,” Khodorkovsky said.

“I very much hope that they [foreign politicians] will remember that I am not the last political prisoner in the country [when they speak to Putin],” Khodorkovsky said. Putin’s spokesman Dmitry Peskov seemed to disagree with Khodorkovsky’s view of himself as a political prisoner, saying Thursday after Putin’s announcement of Khodorkovsky’s pardon request that it represented an admission of guilt. On Saturday, Peskov said the former Yukos head was “absolutely free to return to Russia,” Rosbalt reported.

However, Peskov refused to respond to a question about whether Khodorkovsky was given conditions for his release. Khodorkovsky was sentenced in 2005 to nine years in prison for embezzlement and money laundering in what many saw as a blatant maneuver by Putin to neutralize a powerful rival.

Khodorkovsky’s prison term was increased to 13 years after a second criminal case in 2010 but then reduced to 11 years last December.