The holiday season is almost upon us, ladies and gentlemen. Some of my friends have already decorated their Christmas trees, and there are fairs and markets everywhere, selling ornaments, gifts and various other knick-knacks, and there is a general festive feeling in our capital. So what better way to celebrate the season than with some great live performances? Let's have a look at what this weekend has in store for us!

Friday sees one Reginald Dwight take over the capital, and if you are thinking "who on earth is that?" you are not a true Elton John fan, because Reginald Dwight is his birth name. In his five-decade career, Elton John has sold more than 300 million records, making him one of the best-selling music artists in the world. He has more than fifty Top 40 hits, including seven consecutive No. 1 U.S. albums, 58 Billboard Top 40 singles, 27 Top 10, four No. 2 and nine No. 1 singles. His latest album — which also happens to be his 30th — called "The Diving Board," has made Rolling Stone's list of top albums of 2013, and many critics have gone as far as to say it's one of his best records ever. It's also only the second album in Sir Elton's long and lustrous career where he himself is at the piano, with no other musicians. So you know this is something you cannot miss! This celebrated performer visited our fair capital four years ago, giving people both a taste of his newer releases and the golden oldies, to great public acclaim. This just goes to show that Elton John is incredibly popular in Moscow, so if you haven't gotten your tickets yet, hurry up — Sir Elton takes to the stage at Crocus City Hall on Dec. 6 at 8 p.m. 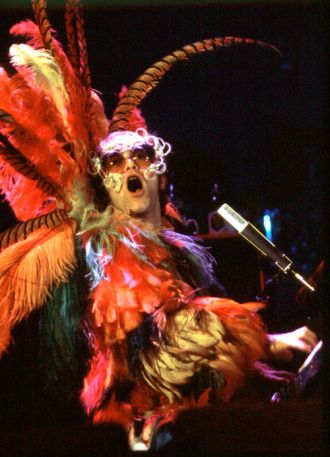 Eltonjohn.com
A younger Elton John was known for his extravagant onstage costumes.

As usual, club doors open citywide on Saturday. Solyanka is holding an event called Punk Yard, with electro and post-punk provided by Finnish group K-X-P with accompanying DJs. GlavClub is opening its stage to Brazilian trip-hop and IDM master Amon Tobin, and 16 Tons is focusing on breakbeat with some help from DJ Beta from Britain, and DJ Mesmer from Romania. But it's not for nothing Saturday is the most diverse day, gig-wise. You can catch some live jazz performed by Amanda Brown and the Village Underground Band at Igor Butman's Jazz Club, or go check out Sweden's Amaranthe at Volta Club, if heavy metal is more to your taste. My personal choice for Saturday, however, is Brazzaville.

Created by David Brown, the former sax player from Beck, Brazzaville is an indie-pop band that rose to fame back in the 1990s and have since released 10 studio albums. They are very frequent guests in Russia, holding a number of kvartirniks, or home concerts in both Moscow and St. Petersburg over the summer. And David Brown is a big fan of Russian rock musicians like Viktor Tsoi, Boris Grebenshikov and Zemfira. The latter just recorded a single with Brown as part of her new project, The Uchpochmak. In fact, according to David Brown himself, the only thing stopping him from releasing songs in Russian is that he believes he has not yet mastered the language. So maybe there is a Russian record in the future, but, for now, just go and enjoy their music. Brazzaville is performing at Moscow Hall on Triumfalnaya Ploshchad; the concert starts at 7 p.m.

Sunday brings us the unofficial king of indie-tronica and baroque pop: Patrick Wolf, who is known for combining electronic sampling with classical instruments. The young singer-songwriter from London utilizes a wide variety of instruments in his music, most commonly the ukulele, piano and viola. He has already been to Moscow twice this year, which might be considered somewhat odd, but his Russian fans are that loyal, and tickets to Patrick's concert have been selling out like hotcakes. So if you are already a fan, or you just want to see what Wolf's music is all about for yourself, go check him out at the Megapolis concert hall, which is located on the Paveletskaya Naberezhnaya. The show starts at 8 p.m., and ticket prices start at 700 rubles.

This is what the weekend looks like — plenty to choose from, as always. So think about it, and go have fun, because that's the best way to beat the winter blues!