He is one of the most prominent contemporary artists living today and audiences and critics are divided on whether to call Damien Hirst brilliant or arrogant. Regardless, Hirst is now a fixture in the art world, and his "Freedom not Genius" exhibition, which opened at the Multimedia Art Museum, or MAMM, on Saturday, will give Muscovites a chance to look at the creative preferences of the British artist.

Hirst first became known in the 1990s for pieces like "The Physical Impossibility of Death in the Mind of Someone Living," where the body of a shark was preserved in a tank full of formaldehyde.

Using a studio-factory setup, where a team of assistants brings his thoughts into being, he has continued to produce highly publicized works, such as a 2007 skull encrusted with more than 8,000 diamonds called "For the Love of God."

The artist's popularity has also resulted in appreciation for his tastes as a collector after his 2006 exhibition "In the Darkest Hour There May Be Light" at the Serpentine Gallery in London gave viewers a taste of his "Murderme" collection. 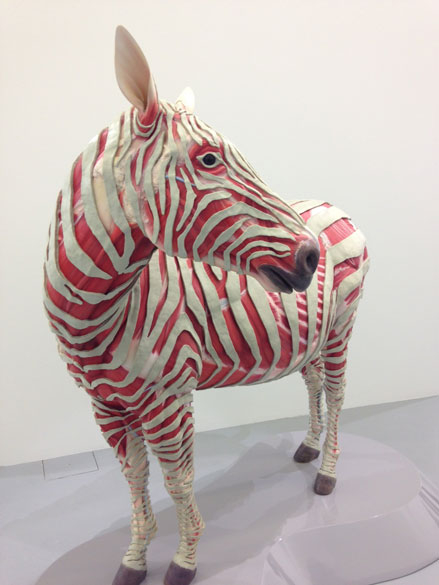 Murderme was then seen again in "Freedom not Genius," when it opened last year in Turin, Italy. The show now at MAMM is the same as the Italian exhibition, but unlike the previous show, Hirst has decorated the museum's lobby and added some of his own spin paintings — the creative work by Hirst in the exhibition.

The pieces in the lobby by other artists do not seem out of place, however, as the works that Damien Hirst likes, maybe unsurprisingly, look a lot like works by Damien Hirst. An entire room on the museum's third floor is devoted to different skull-based pieces, such as a series of skulls adorned with jewels and mosaics made by Steven Gregory or a still life of a skull by Pablo Picasso.

The Picasso is one of the oldest works in the exhibition, which has works from those that Hirst considers to be his artistic forebears, such as Andy Warhol, randomly scattered throughout a show that is decidedly 21st century.

Hirst's collection does give museumgoers a good sampling of those in the Young British Artists scene of which he was a part, by putting works by Sarah Lucas and Tracey Emin next to each other. The show also includes other contemporary luminaries like the graffiti artist Banksy and Jeff Koons, known for fetching millions of dollars at auction for his giant, mirror-surfaced balloon animal sculptures.

However, lest viewers think that the show is about anyone other than Hirst, the artist included plaques that give his running commentary on many pieces. Next to a Banksy painting Hirst says, "Banksy is a friend … He's an outlaw as well … I kind of get drawn to outlaws. I suppose I'm an outlaw too. Or I used to be."

The show has works from other prominent artists, but it still remains primarily a celebration of the collector, who has been criticized for being egotistical. True to form, the descriptions do in fact become perhaps unnecessarily self-focused when Hirst talks about having Francis Bacon's "Man in Blue II" hanging over his bed or says of Koons' shiny balloon "Elephant," "I've got  [it] in my office, and I love it. It has the same brilliance as the diamond skull."

While the first four floors of MAMM are now filled with a collection of one man's ideas about art that are traveling around the world, the top two floors of the museum are a homecoming for a Russian artist, Igor Shelkovsky. The exhibition is the first Russian retrospective of the conceptualist, who emigrated to Paris in the 1970s and is known for his geometric architecture.