President Vladimir Putin's administration spoke out in favor of removing a gigantic Louis Vuitton suitcase on Red Square on Wednesday, following public outcry about its placement in the historical heart of the Russian capital.

Outrage from all echelons of Russian society began as workers completed the installation  on Red Square on Tuesday. By Wednesday afternoon, workers had already begun dismantling the structure, which was set to host a six-week exhibition of Louis Vuitton's luggage.

President Vladimir Putin's spokesman Dmitry Peskov said the Kremlin had not "issued written instructions to remove" the installation, but had spoken out in favor of dismantling it, Interfax reported.

The move comes after several Communist deputies criticized the Kremlin for allowing the suitcase  — which is nine meters tall and 30 meters long — to be set up on Red Square.

"This is a sacred place for the Russian state," said Sergei Obukhov, a member of the Communist Party Central Committee, RIA Novosti reported. "There are some symbols that cannot be trivialized or denigrated."

Ordinary Russians apparently share Obukhov's feelings about the unique nature of Red Square, which was added to UNESCO's World Heritage List in 1990.

"This is an embarrassment for our country," said Ruslan, a Moscow pensioner who enjoys taking midday walks through Red Square. "We sell ourselves to everybody. All we think about is business, business, business," he added, frantically waving his arms at the giant Louis Vuitton suitcase.

The installation, which blocks the view of the Spasskaya Tower, the Kremlin walls and Saint Basil's Cathedral from certain angles, was intended to honor the 120th anniversary of the GUM department store, located across from the Kremlin, with the "Soul of Travel" exhibition.

Proceeds from the exhibition were to be donated to the Naked Heart Foundation, a children's charity founded by Russian model Natalia Vodianova, who also happens to be dating the son of Bernard Arnault, the CEO of Louis Vuitton MoСt Hennessy.

Despite the good intentions behind the pavilion, Muscovites did not appreciate its presence on Red Square.

"I heard they were going to put some kind of modern art pornography in there," said Vladimir, pointing to the mammoth suitcase while sharing a cigarette with a friend on the steps of the Kazan Cathedral on the northeastern corner of Red Square.

While some Muscovites might be misinformed about the nature of the Louis Vuitton exhibition, the general sentiment — both in government and among the population — is that the trunk does not belong on Red Square.

Alexander Sidyakin, a deputy with the pro-Kremlin United Russia party, has filed a complaint with Russia's anti-trust watchdog, requesting that it investigate whether the suitcase violated the country's advertising laws.

Ilya Ponomarev, a member of the State Duma for the A Just Russia party, told The Moscow Times that the presence of the suitcase on Red Square was "very annoying" for Muscovites. 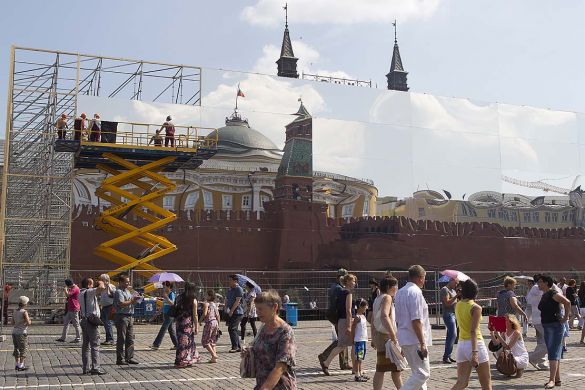 Gigantic mirrors being set up on Red Square for a designer fashion show.

Both the Kremlin and opposition parties, factions that rarely agree on anything, are united by their disgust with the infamous suitcase.

But the opposition has nonetheless tried to capitalize on the Kremlin's apparent mishap, which allowed a French corporation to occupy Red Square with a blown-up version of a luxury item that the average Russian cannot afford.

According to the Communist Party's website, a group of deputies sent inquiries to Prime Minister Dmitry Medvedev, Prosecutor General Yury Chaika and the head of the Federal Protection Service, Yevgeny Murov, for clarification on how the suitcase ended up on Red Square in the first place.

Mikhail Kusnirovich, the primary shareholder in Moscow's GUM department store, said the government had given all required approvals for the exhibition to take place on Red Square, Interfax reported. The Kremlin has denied this claim.

"There is an official procedure for approving projects held on Red Square, which is defined by the Kremlin administration," Yevgenia Skobeleva, head of the Russian branch of public relations firm Grayling, said in a telephone interview. "We tried to organize several photo shoots for our clients there but ran into loads of paperwork and approval processes."

While Louis Vuitton insists that the exhibition has a "noncommercial character," Russians claim to have seen through the French company's shrewd marketing strategy.

"The GUM department store is acceptable on Red Square because it has some historical value for Moscow," said Yekaterina, a student who was headed to the 120-year-old complex. "But it's just wrong to have a big suitcase with no value here."

Louis Vuitton explained in a statement that the suitcase also had historical ties to Russia, claiming that the gigantic trunk was modeled after luggage that belonged to Prince Vladimir Orlov, a cavalry officer close to Tsar Nicolas II.

Louis Vuitton's history lesson failed to convince Russians of the intrinsic value of 19th-century luggage, however.

"I am against the commercialization of historical places," Alexei Pushkov, a United Russia deputy, said in a telephone interview. "There are many other places in Moscow where a giant suitcase would garner interest without causing public outrage."

Gorky Park and the All-Russian Exhibition Center are now potential candidates to host the Louis Vuitton exhibition. Flamboyant talk show host Andrei Malakhov tweeted that he was prepared to set up the suitcase in his backyard in a wealthy Moscow neighborhood.

"Anywhere but on Red Square" seems to be the common theme of the complaints.

For some, the square is a sacrosanct place of worship. It is home to St. Basil's Cathedral, whose multicoloured domes serve as the iconic image of Russia abroad. It also borders the humble Kazan Cathedral, where wizened widows and young families gather to pray.

Red Square is also a burial site. Lenin, who had requested to be buried alongside his mother, rests beside the despised suitcase, which is six meters longer than the Soviet leader's mausoleum. The Kremlin Wall Necropolis, a few steps from the Louis Vuitton trunk, is the resting place of Soviet dignitaries and heroes, including Yuri Gagarin and Leonid Brezhnev.

The juxtaposition of Russia's tumultuous history and foreign opulence has nauseated a public who is hungry for the exaltation of Russian achievements.

"The problems caused by the Louis Vuitton suitcase fits into the framework of pseudo-patriotic hysteria and anti-Western sentiments in Russian society," said Vladimir Slatinov, a political analyst at the Institute for Humanitarian and Political Research. "It is difficult to imagine that this could have happened two or three years ago."

But Red Square is also a victim of its time, having grown increasingly commercialized over the last decade.

Lenin, Stalin and even Putin lookalikes bustle about, taking pictures with tourists for a negotiable 250 rubles ($7.50), and blaring megaphones announce promotions and excursions.

In July, gigantic mirrors were set up in Red Square for a Christian Dior fashion show, also to commemorate GUM's 120th anniversary. Throughout the years, Red Square has also been used as a venue for performances by Russian and foreign artists, and it was even transformed into an outdoor ice rink for the 2009 Kontinental Hockey League all-star game.

"I came here to take pictures with my daughter and it is a real shame that all we see is a big suitcase in the background," said Margarita, who traveled to the city center from the suburbs. "Of course, the suitcase is very stylish, and it's unusual to see such a thing on Red Square, but I don't see why they had to put it here."

Yekaterina Kravtsova contributed to this report.