A Dagestan-born woman detonated a bomb on a bus in the southern city of Volgograd on Monday, killing herself and at least six other people, in the deadliest terrorist attack outside the North Caucasus in more than two years.

The bus was heading north toward the city center on a highway about 2 p.m. when a fiery explosion ripped through it, scattering debris across the road, video footage taken by a dashboard camera showed.

The Investigative Committee said in a statement that six people were killed in addition to the suicide bomber, suspected to be 30-year-old Naida Asiyalova, and 33 people were injured. Many of the casualties were school children aged 15 and 16.

Prominent political analyst Alexei Malashenko warned that it could be the first in a series of attacks ahead of the 2014 Winter Olympics in Sochi.

“I am very worried, but I believe this is the first bell before the Olympics. We should expect more attacks,” said Malashenko, a North Caucasus researcher at the Moscow Carnegie Center think tank.

The blast was the first major terror act in Russia outside the volatile republics of the North Caucasus since the bombing of Domodedovo Airport in January 2011, when 37 people were killed.

Video: Rossiya 24 report about the incident in Volgograd.

In June, the leader of Russia's underground Islamist movement, Doku Umarov, lifted his self-imposed moratorium on attacks in Russia in order to disrupt the Sochi games.

In a video message to his supporters, he urged them to use “maximum force” to prevent the games from taking place.

President Vladimir Putin recently urged law enforcement agencies to crack down in the North Caucasus to make sure security is upheld for the Games, which are Putin's pet project and an opportunity for him to show off Russia as a modern and developed nation.

Putin spokesman Dmitry Peskov said Monday that the president was being briefed about the attack in Volgograd on a regular basis, Interfax reported. Peskov also said that Putin expressed his condolences to the families of the victims.

The site of the bombing was immediately blocked by police, with bystanders unable to see the bus itself, Alexei Serovoi, a local journalist, said by phone from the scene.

The explosion took place in a sparsely populated part of the city, raising suspicions among security experts that it had been planned to go off in a different location. 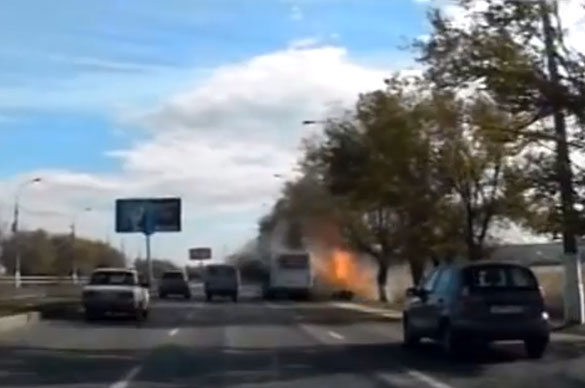 An image of the bus exploding from video taken by a dashboard camera.

“I do not exclude the possibility that the blast was accidental, while the suicide bomber was taking a bus just to reach a certain destination,” tweeted Gennady Gudkov, former deputy head of the State Duma's Security Committee and a colonel of the Federal Security Service in reserve.

The Investigative Committee said that, according to preliminary information, the suspected perpetrator, Asiyalova, was married to Dmitry Sokolov, an Islamist rebel currently wanted by law enforcement authorities.

Female suicide bombers, typically known as “black widows,” have carried out numerous attacks in Russia, often as revenge for the killing of their rebel husbands in the North Caucasus by security forces.

In recent years, there have been an increasing number of Russians recruited into Islamism. One former ideological leader of the Islamist rebels in Chechnya, Said Buryatsky, was born in Ulan-Ude to a Russian Christian mother and Buryat Buddhist father.

Malashenko said that “black widows” and Islamist converts suffer from inferiority complexes. “So by committing terrorist acts they try to prove their value,” he said.

Volgograd is located about 950 kilometers north of Dagestan, the current center of Russia's Islamist insurgency, and serves as a gateway to the Caucasus, a status that contributed to Nazi Germany's intensive shelling of the city as it sought access to Soviet oil during World War II. Soviet and Nazi forces fought one of the bloodiest battles in modern history in what was then called Stalingrad.

Alexei Volotskov, a deputy in the Volgograd city legislature, said there had been no signs of an imminent attack in Volgograd.

“This means that the same can happen anywhere,” he said by phone. “This is a war that still smolders. We must not forget that.”

In August 2004, a Chechen suicide bomber blew up a Volgograd-bound airliner 180 kilometers southeast of Moscow, killing all 34 passengers and 9 crew members on board.

Yevgeny Ischenko, who was Volograd's mayor at the time, said that during his tenure he worked specially with diasporas from the Caucasus to contain potential conflicts.

“What we see is a new flare-up of violence coming from the Caucasus,” he said.