President Vladimir Putin and Indian Prime Minister Manmohan Singh met for bilateral talks in Moscow on Monday, signing a series of agreements to enhance economic and scientific cooperation, but failing to reach a consensus on the future of a Russian-operated nuclear power plant in southern India.

Putin and Singh signed six agreements to boost ties in the fields of energy efficiency, biotechnology and technical regulation, the Kremlin said in a statement. In line with a pledge made in 2009, the two countries are seeking to increase bilateral trade, currently about $11 billion, to $20 billion by 2015.

"We are actively developing our economic ties," Putin said following his meeting with Singh, according to the Kremlin website. "Not only are we pleased with the volume of trade — which, of course, could and must be increased — but also with its quality, a large portion of which consists of high-value-added products."

One issue on which the two sides could not reach agreement was the extent of Russia's involvement in the development of the Kudankulam power plant in the southern Indian state of Tamil Nadu.

India's 2010 Nuclear Liability Act, which holds the operator of its nuclear plants liable for accidents, has deterred Russian state nuclear company Rosatom from completing the third and fourth units of the Kudankulam plant. 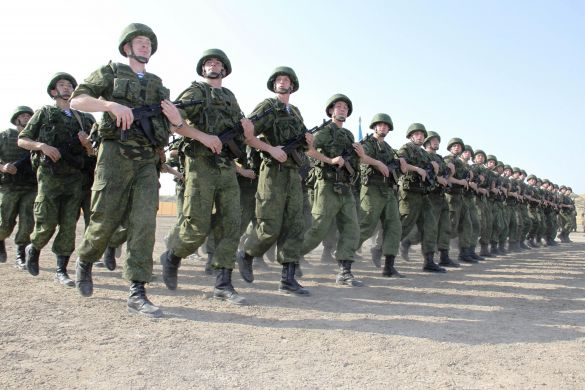 Russian soldiers marching Sunday during a joint exercise in Rajasthan.

The Soviet Union signed a contract to build the Kudankulam complex in 1988. In 2008, Russia and India agreed that Rosatom would provide expertise and technical assistance on the construction of the plant's six 1,000-megawatt reactors.

Both sides, however, are actively seeking a comprise on the liability issue, Kommersant reported Monday.

Putin's meeting with Singh also served as an opportunity to discuss the prospect of joint projects in aircraft manufacturing, engineering, telecommunications and the financial sector.

The 81-year old Singh, who received an honorary doctorate from the prestigious Moscow State Institute of International Relations during his visit, echoed Putin's praise of closer relations.

"It is gratifying to witness steady progress in our relations in fields such as defense, energy, high technology, tourism, and trade and investment. We also have deepening cooperation in international forums, including in the BRICS, the Group of 20 and the East Asia Summit," he said.

The stated objective of the drill, which saw the participation of 250 servicemen from each country, was to improve response capabilities in the event of a terrorist attack. The two militaries conducted a similar exercise in the Russian republic of Buryatia in the summer of 2012.

Putin and Singh, who last met at the G20 summit in St. Petersburg in early September, also exchanged views on Syria's chemical disarmament and the future of Afghanistan.

Russia's cordial relations with India date back to the Soviet era, when the two countries signed the Indo-Soviet Treaty of Friendship and Cooperation in 1971. Today, India is Russia's 18th-largest trade partner.