When Nuri Katz, founder of investment firm Apex Capital, heads for the customs gate, he gets to decide which of his three passports to use — a privilege that his Russian clients would pay up to 5 million euros to enjoy.

Katz is in the citizenship-by-investment business.

Select Western nations provide everything from fast-track visas to full citizenship in exchange for significant investments in their economy. Apex Capital, the oldest of a handful of Russian-centric investment advisories, guides clients through the citizenship-by-investment application process.

While immigration for poorer Russians is filled with sacrifices, the modern Russian businessman chooses alternative citizenship for the luxuries it offers.

"A lot of people do not know what they want," said Katz, who holds Israeli, Canadian, and U.S. passports. "'I want to go there,' clients say. Well, 'there' is 150 different countries."

The U.S., Canada and Britain, as well as smaller nations like the Caribbean islands of Antigua and St. Kitts, all encourage applications. Still, these programs can be both expensive and difficult to navigate. Cypriot citizenship, which metals billionaire Alexander Abramov received in 2010, costs a minimum of 5.5 million euros ($7.4 million), in investments or real estate. St. Kitts, on the lower end of the spectrum, offers citizenship for real estate purchases of no less than $400,000.

Advisory firms, at the least, prepare application documents and assist in finding suitable investments. The hardest part of the application is often explaining the applicant's financial history to immigration officials unfamiliar with Russian history and accounting practices. Applicants who made their start-up capital in the heady and legally ambiguous days of privatization can be the hardest to explain.

Still, "the market has become qualitatively different" over the last decade, said Oleg Lemeshko, of Elma Global, which also assists wealthy Russians in securing second passports. "There is less 'black' and 'gray' capital."

Public knowledge of a Russian's second citizenship, especially for the very wealthy, can also cause problems, and confidentiality is highly valued within the industry. Billionaire banker Vitaly Malkin was pressured into resigning from the Federation Council earlier this year after his Israeli citizenship and decades-long quest for Canadian citizenship was revealed.

The choice of where to invest, by comparison, is relatively easy. Some advisories even smooth the way by encouraging investment in businesses or developments associated with the advisory. Apex Capital's $50 million Ocean Grove development on St. Kitts and Nevis will provide clients with both a qualifying investment opportunity and residences.

Apex Capital charges tens of thousands of dollars per client for these services. At a maximum, though, these firms may act more like a nanny than financial counselor. For the right price, Ashtakhova Global Alliance will act as the registered guardian to international students, a service that includes a phone hotline to help children in "practical, emotional, and health matters," according to its website. If your child needs a dentist's visit or grade boost, do not worry. Ashtakhova Global will handle it.

Despite the complexities of the process, wealthy investors who use these programs bypass the many hurdles faced by ordinary Russians.

Irina Zozulya, whose family emigrated to the U.S. in 1998 from a town near Odessa, remembers an exhausting, year long process of trips back and forth to U.S. immigration services in Moscow. Even a nonimmigrant visa may be hard to get. Zozulya's aunt spent 15 years applying before getting her travel visa.

Immigrants can only receive permanent residency status in the U.S. if they have sponsors or win the green card lottery. Every year, the U.S. opens the door to 50,000 applicants from around the world. In 2013 the lottery let in less than 3 percent of the 109,156 Russians who applied. 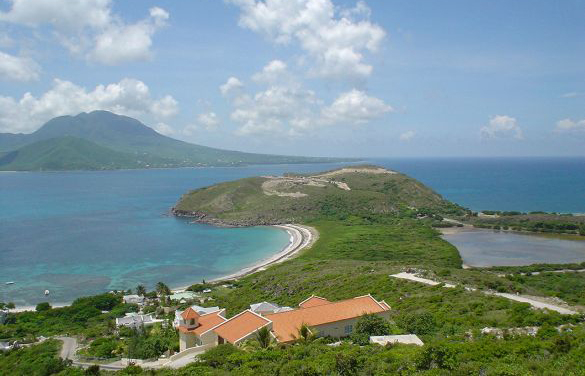 St. Kitts, on the lower end of the investment spectrum, offers citizenship for real estate purchases of no less than $400,000.

But citizenship-by-investment is a market, not a lottery. Some countries, responding to market demand, have gotten creative. Antigua's brand-new program requires investors to spend a mere 35 days on the island within the first five years of receiving citizenship. St. Kitts and Nevis islands began construction of a megayacht marina and luxury complex for rich new citizens in 2008.

According to Katz and Lemeshko, political fear does not drive Russian interest in the citizenship-by-investment market. Defying Katz's expectations, significant political events like the 2003 arrest of oil tycoon Mikhail Khodorkovsky or the 2009 jail death of whistle-blowing lawyer Sergei Magnitsky did not lead to a jump in Apex's business. "The Magnitsky affair did not play a significant role," agreed Lemeshko.

Those with the most to lose — the oligarchs with billions of dollars in assets — mostly obtained a second or even third citizenship years ago.

Some businessmen even have secured second passports at lightning speed.

Israel, which is highly reluctant to extradite its citizens, quickly granted a passport to Khodorkovsky's former business partner, billionaire Leonid Nevzlin, around the time of Khodorkovsky's arrest.

Nevzlin got the passport in one month and three days by donating $1.5 million to a diaspora museum and promising an additional $20 million, Youli Nudelman, an Israeli human rights activist, told a Moscow court in 2008. The citizenship process usually takes a year or more.

Nevzlin, who was sentenced in absentia by the court to life in prison on conspiracy to murder charges, has called the allegations politically motivated and said that the reason he sought the passport was to make it easier for him to travel to "international scientific and public events."

Apex and Elma's citizenship-by-investment clients, for the most part, live in Russia for the majority of the year. With personal assets generally worth $1 million to $25 million, these Russians see citizenship as the next step in their rise to the top.

As Nevzlin suggested, many Russians value a Western passport because of the convenience it brings. Russians need visas for travel to most of the West. They or their assistants must fill out endless visa forms, coordinated and planned across dozens of countries. Having a U.S. passport, however, would mean that a businessman could jet off to Paris or New York at any time he chooses.

Pride also drives applications. A passport control officer's needling questions can be galling, especially for business leaders used to more deferential treatment. As Katz put it: "You are 46 years old, and some 22-year-old behind a glass screen is looking at you, saying. 'Are you going to stay legally in my country?'"

Participation in citizenship-by-investment programs gives the wealthy the security and power that they experience in their personal life. The choice of country, consequently, is largely tied to an applicant's lifestyle.

Many Russian clients choose fast track visa programs with minimal residency requirements. Those who want a beautiful vacation home and a winter mooring for their yacht prefer St. Kitts or Antigua. Russians buy more megayachts than anyone except Americans, and they have held their place in the market for years. Those more interested in a quick flight back to Moscow choose Bulgaria.

Britain is typically the choice for those interested in their children's education and in an investment-friendly climate close to Moscow. Several firms, including the London-based Kalido Private Office, offer this type of investor everything from relocation services to investment consulting. However, while some may profess, say, a love for Miami, few Russians are granted status under the U.S.'s EB-5 investment program — a mere 30 in 2011, according to the latest U.S. government figures. Canada's program is even more exclusive, with only five successful Russian applications in 2011, according to Apex Capital.

For many immigrants, the promise of a better life in the West may make up for the difficult application process. Wealthy Russians are not interested in a better life, though. They are interested in an easier one, in which borders and governments no longer wield power over them.

"I guess if you have money you can do anything," said Lesya Galai, an Ohio resident who obtained her U.S. green card in 1990, just as the Soviet Union was collapsing. That, she said, includes getting a second passport.