A fight broke out in St. Petersburg after three vehicles came to a halt in the road, one of them bearing the chairwoman of Rosbalt news agency's board of directors.

Two conflicting accounts of the altercation and its aftermath have since been published.

Rosbalt reported that a small bus and a sedan deliberately blocked chairwoman Natalya Cherkesova's car on Monday, after which several men "of non-Slavic appearance" attacked her driver and "beat him viciously" in front of numerous bystanders, saying "a Toyota with Moscow plates should not get in the way of people respected in St. Petersburg." 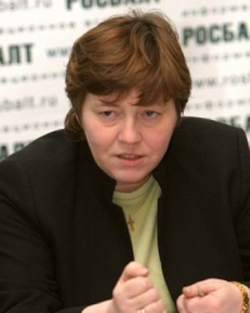 The police did not detain the attackers, who drove away after threatening the victim and witnesses, Rosbalt reported.

The beaten driver then took himself to the police station to give a statement before going to the hospital in an ambulance. Cherkesova was not injured in the altercation, the report said.

The alleged attackers were former kickboxing champion Koba Gordeladze, who is now co-owner of the Kabanchik restaurant chain, and his brother, Fontanka.ru reported Tuesday.

Gordeladze said that he and his brother stopped their vehicles when they noticed that another car was lurching strangely and refusing to let Gordeladze's brother's car go by.

A heated conversation broke out between Gordeladze's brother and the driver, who said that he was a journalist and made disparaging comments about the Gordeladzes' ethnicity. The conflict culminated in a minor physical struggle that lasted about 15 minutes, Gordeladze said.

Gordeladze confirmed that he and his brother drove away after the police arrived, but only because they thought that the matter had been resolved. However, once they found out that the police were looking for them, they went to the police station voluntarily, he said, Fontanka.ru reported.

A criminal case has been opened and both Koba Gordeladze and his brother have been named as suspects, with his brother detained for two days while Koba Gordeladze was sent to the hospital with a concussion. If convicted on assault and battery charges, they could go to prison for three months.

Cherkesova is the wife of Viktor Cherkesov, the first deputy chairman of the State Duma Committee on Safety, RIA Novosti reported.