Hundreds of students, migrant workers and other Muscovites gathered Monday to greet the Olympic flame in a ceremony kicking off the torch's first city visit in its 123-day trip around the country.

Launched by President Vladimir Putin on Red Square on Sunday, the relay will take the flame on a 65,000-kilometer journey showing off Russia's enormous breadth and diversity before finishing in Sochi for the start of the 2014 Winter Games on Feb. 7.

The marathon, whose Moscow leg was started by Mayor Sergei Sobyanin near St. Basil's Cathedral, will also give an opportunity for thousands of torchbearers, most of whom are volunteers and athletes, to show their faces on the national stage. 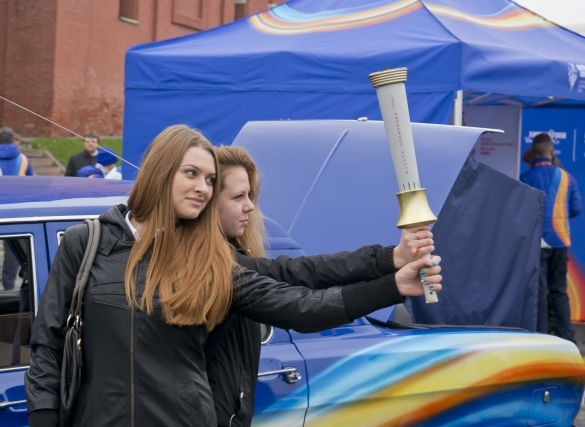 Two women posing near Red Square while holding an unlit torch from the 1980 Moscow Summer Olympics.

Andrei Sukhantsev, 28, director and founder of the Spartak beach football club in Moscow, exuded enthusiasm about the upcoming games while speaking to a crowd of journalists, apparently happy to take up his new role of "public figure for a day."

"I think this is a historic event because the last time we hosted the Olympics in Russia was 1980, and this is the first Winter Games in Russia," he said. "So I am happy that I will participate in an event of worldwide importance and bring my own contribution to it."

"The main role of the marathon is to unite Russian people around sports," Sukhantsev said.

Another torchbearer, Vera Kolesnik, 18, a student at Bauman Moscow State Technical University, said she was a bit anxious and did not expect so much media attention.

"The Sochi games have already brought a lot of positive developments into my life: people, massive events. I cannot wait to go there as a volunteer," she said.

Monday's ceremony marking the start of the torch relay was attended by a diverse group that included students and migrant workers — frequent participants in state-sponsored rallies. It appeared that migrant workers were forced to attend the ceremony to create the image of a crowd for television broadcasts. 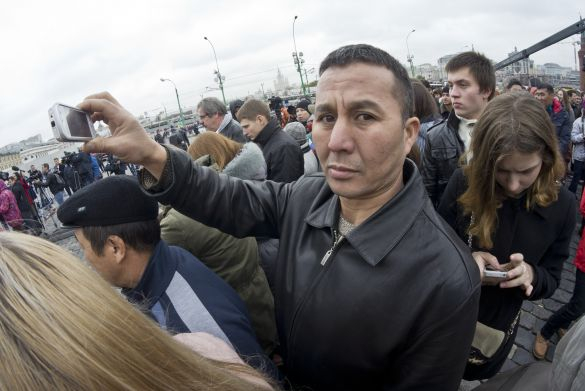 A man holding up his phone to take a photo near the start of the relay.

Ruslan, a native of Kyrgyzstan, works for a communal services provider in central Moscow. He said he had to attend many such ceremonies at the request of his boss, but that he was happy to attend the start of the torch relay.

"We are still proud that the Olympic Games are being held in Russia," he said.

Oleg and Max, both 16, did not shy away from showing their delight at having skipped school to attend the ceremony.

"We can drink free Coke and dance," they exclaimed with grins on their faces.

The cheerful crowd seemed unfazed by the mishaps that have beset the torch relay from day one. On Sunday, the flame went out when an elderly former athlete carried it through one of the Kremlin's main gates.

He then signaled to a Kremlin guard standing nearby to rescue him from the embarrassing situation, which was being shown live on television. The guard quickly came to the rescue, reigniting the torch with a cigarette lighter.

The incident sparked a flurry of reaction on social networks, with some commentators seeing symbolism in the episode. 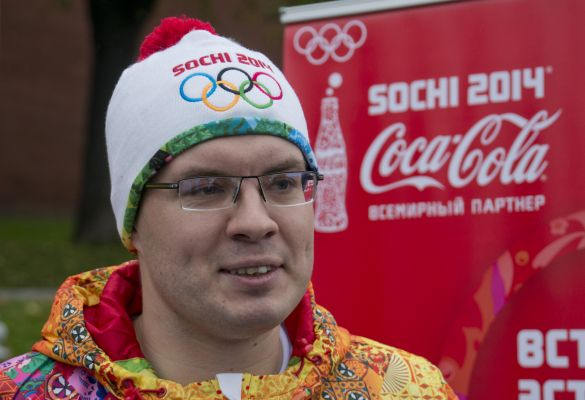 "The grey-haired Kremlin and its relics did not let this flame into it," Deacon Andrei Kurayev, a prominent theologian, wrote on his LiveJournal blog. "What happened was so beautiful that one can even attribute it to covert designs by the Orthodox lobby in the Kremlin."

He also called the flame "pagan,"  even though Orthodox priests every year bring to Moscow the so-called Holy Fire that is believed to be miraculously lit in the Church of the Holy Sepulchre in Jerusalem.

Past Olympic torches have suffered similar failures during the relays, including at the recent Summer Games in Britain in 2012 and in China in 2008. During the 1980 torch relay ahead of the Summer Olympics in Moscow, the torch went out dozens of times.

On Monday, the torch went out again on the embankment in front of the Kremlin.