Jailed Pussy Riot rocker Nadezhda Tolokonnikova is in serious condition after calling off a hunger strike this week, her husband said, urging supporters to travel to the prison in the Mordovia republic to participate in one-person protests.

But the authorities indicated a low tolerance for protests, detaining a lone demonstrator  who rallied with a masked face outside the local office of the Federal Prison Service.

"Nadya's condition, no joke, is now very serious," husband Pyotr Verzilov wrote on Twitter late Thursday. "Therefore, come to Zubova Polyana to rescue her. There are means to live and fight here."

Tolokonnikova ended an eight-day hunger strike Tuesday and was put on a special diet, the Federal Prison Service said earlier. Prison officials had described her condition as stable.

Verzilov did not elaborate on his wife's condition in the tweet, which he posted on the Twitter feed of the artist collective Voina.

Tolokonnikova's supporters have been holding one-person pickets outside the local Federal Prison Service office for the past two days, demanding that they be allowed to see the prisoner. Prison officials have refused to grant them access.

Pyotr Verzilov's tweet saying that his wife is in serious condition.

Police quickly detained a single protester who showed up around 4 p.m. Thursday outside the prison service office in the town of Yavas, 37 kilometers away from the prison where the Pussy Riot member is being held. The unidentified man, wearing a black hood and a dark scarf across his face, held a sign reading, "Whether or not Nadezhda Tolokonnikova's complaints have merit, these are political PR tricks."

Police said they detained the protester for covering his face with a mask, a violation of the law on public demonstrations that was enacted last year amid a government crackdown on anti-Kremlin protests. Under the law, one-person protests are not illegal, but gatherings of two or more people require approval from the authorities. 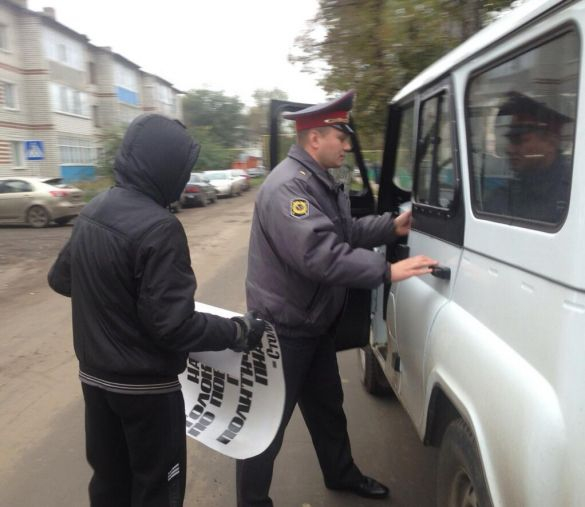 
Tolokonnikova's supporters said the protester worked for the prison service and declared him to be the first prison employee to stand up for the rocker.


But the police, who released the protester after confirming his identity, said that he had no connection to the prison system, Interfax reported, without elaborating.

Tolokonnikova has vowed to resume the hunger strike if the government and the prison fail to check the conditions of the prison, which she says are unbearable. She also wants the authorities to guarantee the safety of inmates who give testimony about the prison's conditions, and has called to be transferred to another prison if the authorities refuse to file charges against deputy prison warden Yury Kupriyanov, whom she has accused of threatening to kill her. 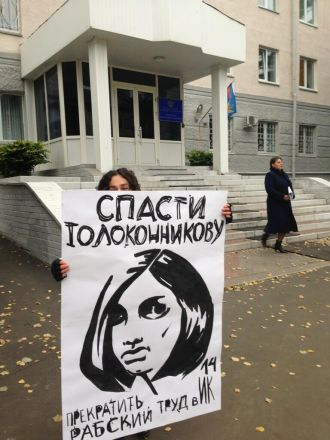 Tolokonnikova and a fellow band member are serving two-year sentences in separate prisons after being convicted of charges of "hooliganism motivated by religious hatred" for taking part in an anti-Putin performance in Moscow's Christ the Savior Cathedral in February 2012. The sentence is widely seen as politically motivated, and Pussy Riot has won widespread support abroad.

Meanwhile, State Duma Deputy Mikhail Degtyarev has asked prosecutors to dismiss Tolokonnikova's lawyer from the case over a possible conflict of interest. Degtyarev said he was "outraged" to learn that the lawyer, Irina Khrunova, was married to Pavel Chikov, a member of the Kremlin's human rights council. Chikov also is the head of the Agora rights group.

Degtyarev, who unsuccessfully ran for Moscow mayor on the Liberal Democratic Party ticket last month, is the author of legislation floated in the Duma in recent weeks that would ban gays from donating blood and offer working women two days off every month while they are menstruating.