The Olympic flame for the Sochi Winter Games was lit Sunday at a ceremony at the site of the ancient games in Olympia, kicking off a weeklong relay that will see it travel through Greece before arriving in Russia.

At the ceremony attended by senior Olympic and Russian officials, the flame was lit using the sun's rays reflected on a large parabolic mirror, a traditional method that symbolizes the approval of the gods to host the games.

Greek actress Ino Menegaki, playing the role of the high priestess for the third time, lit the Olympic torch and passed it and an olive branch symbolizing peace to the first relay torchbearer, Greek alpine skier Giannis Antoniou. He then passed the torch to Sochi Games ambassador Alexander Ovechkin, a former ice hockey star who became the first Russian to carry the flame.

"It is especially honorable for me to be the first torchbearer of Russia," Ovechkin said in an e-mailed statement. "I am proud to be at the lighting ceremony in Olympia, which will start the biggest national relay in Olympic history." 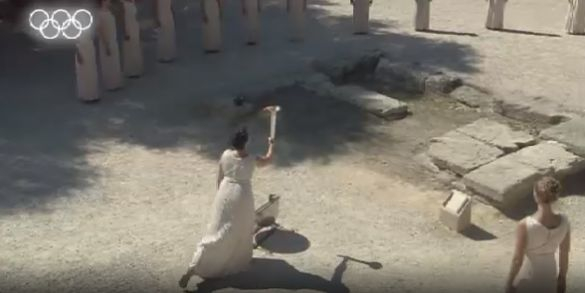 The lighting of the Olympic torch

Now 250 Greek torchbearers will carry the flame 2,000 kilometers through 33 towns in Greece before reaching Athens on Oct. 5, where it will be passed to the Sochi 2014 organizing committee. The next day it will be brought to Moscow and then to Sochi for the start of a 65,000-kilometer relay through 2,900 towns in all of Russia's 83 regions — the longest trek of the flame in the history of the Winter Olympics.

"Ninety percent of the Russian population will be within an hour's reach of the torch relay route at some time or other, and this means that about 130 million Russian citizens will be able to watch or participate directly in the relay," the Sochi 2014 committee said in a statement.

The flame will be entrusted to 14,000 torchbearers, who will travel by car, train, plane, Russian troika and even reindeer sleigh to return to Sochi for the games' opening ceremony in February.

"The arrival of the flame in Sochi on Feb. 7 next year, will not be the end of the story but merely the beginning, as the world's best winter athletes continue to inspire the world through their actions and spirit during the games," said Thomas Bach, president of the International Olympic Committee. "We wish the Sochi 2014 Olympic torch relay great success on its journey."

The lighting of the Olympic torch