So, you made it to Russia and you are riding the subway. Congratulations!

The next thing you need to know is How To Properly Exit The Subway, In Russian.

One time I was Listening To The Radio, In Russian and they were reporting on America, confirming once again the deep infatuation this great land has with my homeland. "America," the announcer announced as part of his announcement, "is 80 percent illiterate." I was all ears now. "Because," the announcer announced,"80 percent of Americans cannot correctly read the bus schedules at bus stops." I was stumped, because this indeed is a truth that I also hold to be self-evident: That almost no Americans know how to ride public transport. Indeed, the first time I rode a city bus was when I turned 18. Although I did ride one of those yellow school buses (just like in the movies, my Russian friends) almost every day.

So, if you think proper instruction is a waste of time, I humbly inquire, how is the weather up there on your high horse? Because probably, if you think exiting the subway is a matter of a simple transition through some doors, then you have never Exited The Subway, In Russian, and are, with all respect, a foreigner. 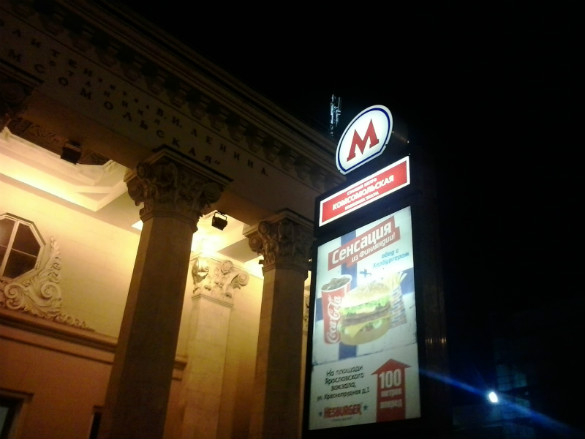 Without further ado, How To Properly Exit The Subway, In Russian:

1) Timing: Nothing screams more loudly "I don't have a clue How To Properly Exit The Subway, In Russian!" than improper timing.

1a) Timing At Midnight Or 6 a.m. First, let's imagine together that perhaps the subway train car is not jam-packed. And perhaps you are riding and you feel the train slowing. If you jump out of your seat too early, and the train picks up speed again, and you stand there like the foreign oaf you are, staring at the closed door and the tunnel streaming by, the blood will come to your face. You have shamed yourself, your family, and your nation. Be cool like that. Wait for the train to actually enter the station, and then kind of meander to the door as it opens. Sauntering out of the metro is way cooler late at night. Much cooler than jumping your guns and standing in front of a closed door.

1b) Timing During Daylight Hours And Evening And Morning. Second, let's imagine that your subway train car is jam-packed. If you are riding during rush hour, this will not be difficult to imagine. Indeed there are times that I feel especially close to the Russian people. And I am reminded of an old American soap commercial that refers to "all 2,000 body parts." I had no idea what that meant, until I rode in a jam-packed subway train car, In Russian. As the train becomes fuller and fuller, you begin to wonder if the walls aren't made of rubber (in only a short time, you will discover that they are not). And as you are forced farther and farther from the door, yet closer to your final destination, you will begin to lose hope in yourself and hope in humanity, and the thin thread of expectation that you could possibly exit at your planned stop will snap, together with your dreams for the day, and your life. At this moment in time, you might be tempted to let out a William Wallace-like "Freeeeeedommmm!" bellow, as you frantically consider how you will rip yourself out of the bowels of the earth that you are careening through at top speed. Don't do it. Stay cool. And keep on reading. This blogger will explain what to do next, absolutely free of charge.

Since your mouth will be incredibly close to the person who is most obstructing you from the subway train car exit, you should ask "Are You Exiting," In Russian, in a volume that is somewhat less than you may have originally presumed.

3) Obstructionist Observation. Now, you must carefully observe this exit obstructionist. Attentive Inspection of the Obstructionist might seem like a given, given the fact that there is a decent chance that part of your face is touching part of their face. I think I sometimes would prefer for the Obstructionist to turn around and give me a short story version of their travel plans. Instead, usually the reply is a twitch of the face or a movement of their torso to provide way towards the exit.

If there is no twitch of the face and no movement of the torso, inspect their ears and determine if they are listening to Fifty Cent or Rockonmoninov. If the wires inserted in their ears tell a tale of musical enjoyment, Asking Them Anything, In Russian is useless. Take the back of your hand and press slightly against the outer edge of The Obstructionist's elbow. They will then either stand perfectly still or move their torso, To Provide Way.

Congratulations! You have now moved your first Obstructionist, In Russian. Now, you must follow these instructions again and again as you repeat the process until you have reached the door or are standing behind someone who has not moved, suggesting that they are a Fellow Exitee.

4) Caution! The Doors Are Closing! Perhaps you have followed my instructions and have kept your cool and the Presumed Fellow Exitee turned out to be a Closet Obstructionist. Now those happy crowds have exited on the correct stop and a stampede is filling the train. And here you are, the Moscow dunce, still standing in the middle of the train car.

You now have this blogger's permission to throw all aforementioned advice out the Subway Train Door, if you will. And you will. As you Shove, Push, Shout, and grab the now closing door, force it open and fall out onto the platform.

There are some usual Russian phrases that you might mutter in this situation. You will have to search other blogs to learn them. 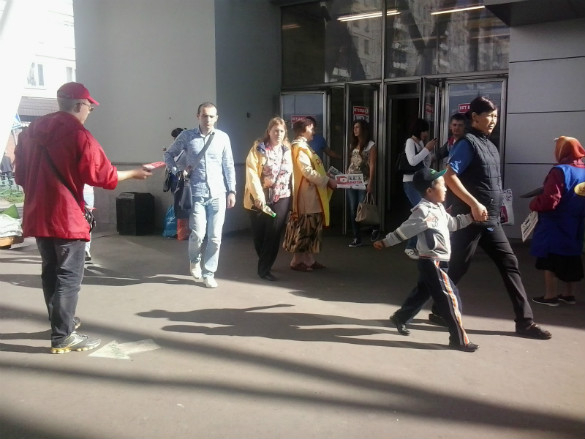 One would hope that these citizens made the correct turn decision after Exiting The Subway through The Glass Doors.

6) To The Right. And here I will use this small yet valuable space in the interwebs to urge you To Stand On The Right on the escalator. Or walk on the left. Do not be a nimrod. Do not stand on the left.

7) The Glass Doors. A further window to Common Moscow Understanding is the Glass Doors. Once you have walked down the platform towards the Correct Wagon and have either climbed some stairs or taken a short ten minute escalator ride to almost ground level, you will encounter some glass doors.

These swinging glass doors, framed in military grade steel, were installed as part of a spoof of a Japanese game show gauntlet. Be nice and hold the door for the person after you. Be amazed by the wind rushing through the doors. Now you're outside the glass doors. Do you go right or left? If you don't know, you can kiss your plans to see your special friend good-bye.

If you know what I mean.

Do you know what I mean? Have I missed any valuable Subway Exit Advice? What is your favorite Subway Exit Story? Comment below!