Moscow might be shivering in cool rainfall this month, but the southern resort town of Anapa is drenched in the sun.

Perched on the northern shore of the Black Sea, this popular tourist destination in the Krasnodar region is attracting a large number of Russians who normally would have flown to resorts in Turkey or Egypt but decided to stay closer to home this summer over concerns for their personal safety amid unrest in those two countries.

During a visit to Anapa, Moscow Times photographer Vladimir Filonov found that few regretted their decision. As local vendors hawked dried fish and lifeguards rode around on four-wheelers on the sandy beach, vacationers played a variety of sports, stuck their feet in aquariums for fish foot massages, took photos with Africans dressed in native garb for 100 rubles a pop, and, of course, spent long hours relaxing in the warm sun. 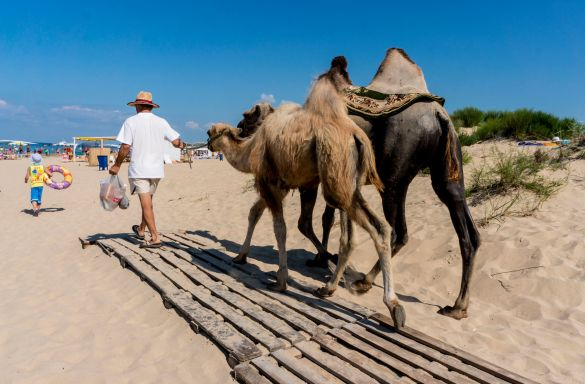 Heading to the beach with prized possessions: a boy with his inner tube and a merchant offering camel rides.

The European Parliament has awarded the Kremlin critic its Sakharov Prize for Freedom of Thought.
Exclusive

Moscow will go into a strict lockdown if coronavirus infections continue to rise, according to a Moscow government order sent to businesses.

The announcement comes after record levels of deaths and infections.
DIPLOMATIC TALKS

Russia is hosting high-level talks with the Taliban and officials from a number of other countries, including China and Pakistan.