State television on Friday showed President Vladimir Putin catching a 21-kilogram pike in a  Siberian lake and kissing it, in what analysts say was a publicity stunt meant to portray Putin as a strong leader capable of re-election in 2018 and bloggers say was pure fiction.

The footage, said to be taken from a recent weekend Putin spent in the republics of Tyva and Khakasia with Prime Minister Dmitry Medvedev and Defense Minister Sergei Shoigu, has triggered speculation about what signal it was meant to send, and, for some, about whether or not it is even real.

One prominent blogger has suggested that the Kremlin press office recycled photos from a fishing trip that took place in 2007, while other bloggers questioned the true weight of the pike.

The video showed Putin standing in a boat in the middle of a river with a local hunter helping him as he reeled in the giant pike.

After Putin pulled the fish closer to the boat, the local hunter caught it in a net and pulled it onto the boat as Putin gleefully said, "That's a trophy!"  before kissing its head and throwing it into a barrel with other fish. 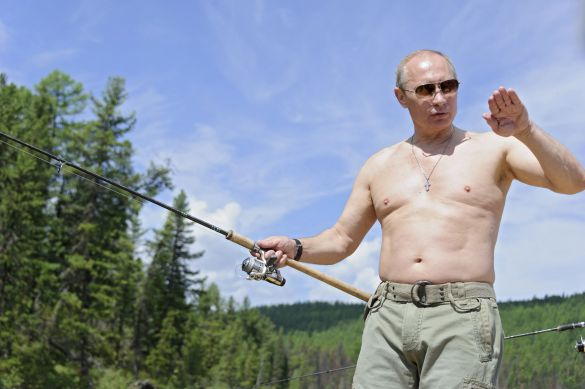 Vladimir Putin gesturing to his companions while fishing in the Tyva republic in the Siberian Federal District.

Putin's spokesman, Dmitry Peskov, told journalists that it took Putin 30 minutes to lure the fish and drag it out of the water, RIA Novosti reported.

Fish cakes were later made out of the pike, and they were "very tasty," Peskov said.

Alexander Khugarbayev, a journalist who reports about nature, compared Putin's stand-off with the fish with that of an old man and a fish in Ernest Hemingway's novel "The Old Man and the Sea."

"Well, it's a duel. Who is more cunning, who is smarter," Khugarbayev told state radio Vesti FM.

Alexei Makarkin, deputy head of the Center for Political Technologies, said by telephone that the latest publicity stunt shows that Putin wants to be re-elected as president in 2018 and "needs to show that he is a strong leader, a superman, especially when opposition supporters say that he has become weaker."

Putin, 60, is serving his third term since 2000. In the past 13 years, his feats have included diving   into the sea and finding two ancient amphoras, leading сranes while flying a hang glider, playing the piano and singing at a charity concert, among other things. 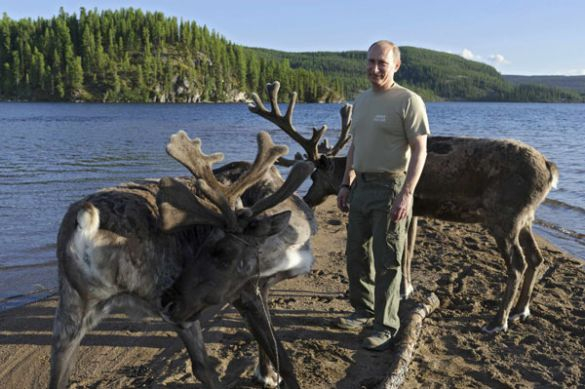 Putin posing for a picture alongside two reindeers in Siberia earlier in July.

Despite a flurry of mocking comments by bloggers about Putin's fishing trip, the stunt was aimed at the "pro-Kremlin electorate who get information from television" and who will "treat the president's appearance on television screens quite placidly until they are given salaries," Makarkin said.

Andrei Zverev, an expert on political publicity, told radio Kommersant FM that Putin's display of "masculinity … means … that he is eager to lead the country further on."

But political analyst Alexander Morozov said Putin's appearance in an informal environment with Shoigu is meant to show that Putin has good relations with Shoigu amid rumors that the Defense Minister may replace Putin in 2018.

"Many officials don't understand what is happening higher up and whether everything is all right there," Morozov said, hinting at the possibility that some circles of senior officials may want to replace Putin with Shoigu. 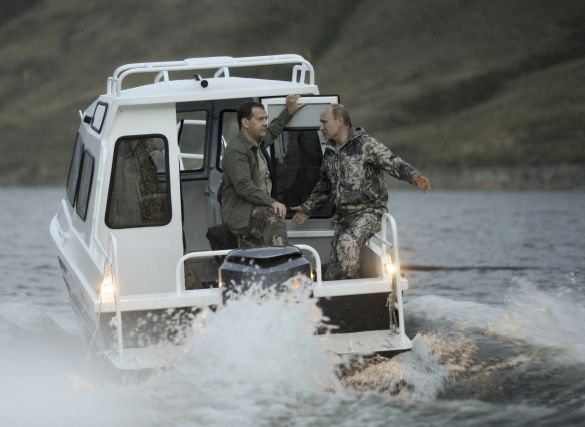 Prime Minister Dmitry Medvedev and Putin sitting on a boat on the trip.

Whatever the case, the publicity stunt did not have its desired effect on bloggers and journalists, who treated reports of Putin's luck with fishing with distrust.

Prominent blogger and journalist Andrei Malgin said Putin was wearing the same glasses, watch and trousers on this trip that he did while on a 2007 fishing trip to the republic of Tyva with Shoigu and Prince Albert of Monaco.

"Doesn't it seem to you that they are trying to feed us canned goods that were made several years ago?" Malgin wrote on his LiveJournal blog.

Malgin also noted that Tyva is not included on the official list of the president's trips on the Kremlin website and that the president was riding in an Emergency Situations Ministry motor boat, just like in 2007 when Shoigu headed the ministry. 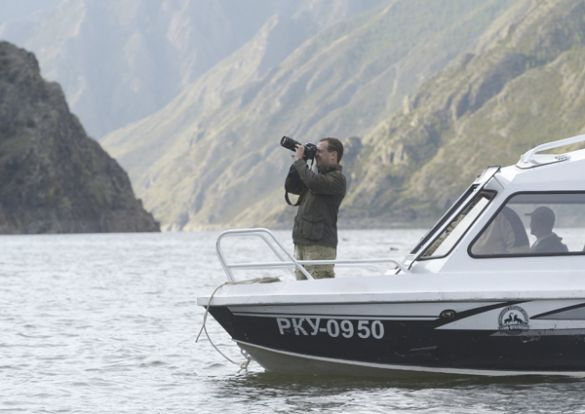 Prime Minister Dmitry Medvedev taking pictures of the picturesque surroundings while riding on a motor boat.

High-profile businessman and fisherman Alfred Kokh expressed doubts about the claim that the pike Putin caught was 21 kilograms. Calculating the weight of the pike using Putin's height and the length of the fish, he said the pike weighed "10 to 11 kilograms at best, but not 21 like Peskov's lies say."

Peskov denied Malgin's and Kokh's accusations on radio RSN on Sunday, saying Putin's trousers were in fact new and Putin's watch was similar to the one he'd worn previously. He also said he'd personally seen the fish weighed on the scale.

A Novaya Gazeta reporter attributed her skepticism to the fact that the trip was reported long after it happened. She said the delayed publication of the photos suggested that the teams of Putin, Medvedev and Shoigu needed time to "come to agreement" about the pike's weight, as well as about whether "it'd be a good idea to include shots of the top three officials naked down to their waists, and if so, in what dosage?"