YAKUTSK, Sakha republic — The federal road agency, Rosavtodor, revealed the initial participants Tuesday in Moscow for a multibillion dollar tender to build a long-awaited vehicular bridge across the Lena River in northeastern Siberia.

The tender, announced at the end of last week, is for a concession to build a three-kilometer bridge over the river that separates the Siberian city of Yakutsk from the mainland, which is now only accessible via minor roads and the great waterway.

Yakutsk, founded over 300 hundred years ago by Cossack Pyotr Beketov, is one of the easternmost cities in Russia. Although surrounded by natural resources, it lacks the transportation network to ship them out and faces significant challenges in supplying its population of 300,000.

The total value of the contract is 56 billion rubles ($1.7 billion), with the government providing 75 percent of the required amount and the remaining 25 percent to come from private funds.

The successful bidder will have 6 years to construct the bridge and then be obligated to maintain it for 8 years. As the bridge is planned to be free of charge, the concessionaire will see a return on investment in the form of government rebates stretched over the maintenance period. The overall term of concession is 14 years.

"The project has already seen a lot of interest," said Roman Starovoit, the head of Rosavtodor.

He said financial support could come from major banks, such as Sberbank and VTB.

As for the construction, Sib Most, Volga Most, DSK Most and other local companies have also expressed their interest, he said.

Among international parties, French company Vinci—which is now involved in the construction of the Moscow to St. Petersburg toll road— is also eyeing the project, Rosavtodor chief said.

"The bridge is very important for the region and its economic development," Starovoit said. It would finally connect the republic's capital to the transportation arteries on the east bank.

A road show for the project is to be held in August, he added.

Yakutsk has the feel of a city under permanent siege. Situated on the left bank of Lena, it is separated from the right bank by a 10 kilometer-wide body of water. On the opposite shore, the only major highway in the region passes parallel to the city, going northeast to Magadan and southeast to Khabarovsk and Vladivostok.

The city and the municipalities around it are in a transportation dead end, with the only access being the river itself and that only for a short period in the summer.

The process of obtaining supplies in the region has a nickname: It is called "northern delivery," and it is not an easy task.

One option to bring goods to the capital is to transport them via the highway and then across the river by ferry. Another way, primarily used during the short summer period when the river is ice-free and navigable, is to ship via the Laptev Sea far in the north along the Lena to Yakutsk's river terminal. 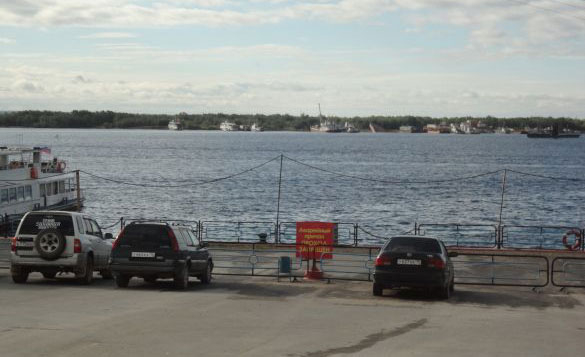 Cars and ferries waiting on the east bank of the Lena River near Yakutsk.

At times when the ice sets in or starts to break-up, which could take as long as several months, the only way to supply the city besieged by nature is to use helicopters.

In winter cars and trucks can go across the Lena on ice that firmly sets in November, but before it does, the only alternative to cross the thin ice is via hovercraft—a one-way ticket costs 2,000 rubles ($61) per person.

All these challenges jack up the prices for getting goods delivered. Fresh fruits can be found, but a price tag of 200 rubles for a kilogram of plums is prohibitively expensive, even by Moscow standards.

In addition to hardships on individuals, industry in the surrounding region also suffers because of the deficient transportation network.

Oil, coal, rare earths, gold, diamonds and uranium are just a few of the resources that Yakutia possesses. Although extracting them in harsh conditions of permafrost and winter temperatures as low as minus 50 degrees celsius is an arduous task itself, without reliable means of transportation the whole idea becomes unfeasible from the start.

A railroad that connected the Baikal-Amur Mainline, or BAM, and the small settlement of Nizhny Bestyakh about 20 kilometers south of Yakutsk was meant to improve the situation. Completed in 2011, with a new bridge it could now be extended to link to Yakutsk.

"The locals have never seen a railroad in their life. When it was completed, the people would come up to it and touch the rails in disbelief," said Alexander Dudnikov, general director of Transstroi Vostok, a company that built the steel road.

This 800-kilometer line, begun in 1996, starts at an industrial community of Berkakit on the BAM, heads north to Tommot and was planned to terminate in Yakutsk.

In the first years of its construction, the railroad was built at the breakneck pace of 123 kilometers per year, and became part of Soviet labor folklore.

However, the project saw periods when there was a shortage of funding and the line took over 15 years to complete.

The final, "golden" spike of the railroad was laid in the presence of then-President Dmitri Medvedev in 2011.

The railroad is to start full operation for freight haulage by the end of this year and the first passenger train is expected next autumn when a rail station in Nizhny Bestyakh opens.

Part of the line is already carrying freight trains.

"The railroad allowed to start extracting and transporting coal from two sites in southern and central Yakutia," said the head of the republic's transportation department, Semyon Vinokurov.

"Estimates are that there are 1,500 locations in the vicinity of the railway with extractable resources worth a total of $200 billion," he added.

Local authorities said the road had even greater potential. If there were a connection to the river port in Yakutsk, it could transform the whole transportation network in the region and attract a number of international players.

But to make this link there needs to be a bridge built across Lena.

A combined auto and rail bridge in this spot was discussed back in Soviet era as the need for such a connection was even evident then.

A preliminary project was prepared in 1986 when 19 holes up to 45 meters deep were drilled to help determine the geographically and geologically optimal route to build the bridge.

About 20 kilometers south of Yakutsk, there is a point where the river is only 3 kilometers wide. That is where it seemed to be feasible to construct the bridge and the same location for it is proposed today.

The project was never launched, but Tuesday's announcement confirms it might have a new lease on life.

The latest Cabinet directive, issued in April, foresees a two-lane, three-kilometer vehicular bridge to be built across Lena at the site of the first Soviet pre-project research. Original Soviet-era plans to make it a combined rail and road bridge seem to have been shelved, at least for now.

Although a long awaited relief for the city, a vehicle-only bridge cannot satisfy all the needs of the region, Transstroi's Dudnikov said.

Industry requires a rail connection as well, and with a rail line now being in the vicinity of Yakutsk, it could bring vast opportunities if continued across the river.

"This transport corridor could be interesting for Southeast Asian countries such as Japan, China, both South and North Korea," said Artur Alekseyev, deputy general director of Transstroi Vostok.

If the rail line were to have a connection to the river port in Yakutsk, it could see multimodal container operations, he said.

Modern river-sea ships could come to the port in Yakutsk carrying from 5,000 to 10,000 tons of freight. The goods, transferred onto rail lines, could thus be transported directly to Europe, cutting the trip from China in half in terms of distance and cost.

While a combined rail and vehicle bridge would cost more than just a connection meant for vehicles, there could be an opportunity to build the rail bridge later if the pylons to support both structures were installed in advance, Dudnikov said.

But for now, the project plan does not include this kind of foresight.