KIROV — A Kirov court on Thursday found opposition leader Alexei Navalny and his co-defendant guilty of embezzlement and sentenced Navalny to five years in prison, a ruling his supporters and many observers said was part of a politically motivated crackdown on dissent by the Kremlin.

Navalny’s co-defendant and business partner, Pyotr Ofitserov, was found guilty of colluding in a scheme that involved the alleged theft of timber from a state-owned company in 2009, resulting in damages of 16 million rubles ($490,000) to the state budget. Ofitserov received a four-year prison sentence. Each was also given a 500,000 ruble fine.

Supporters of Navalny, who led thousands of people in protests against President Vladimir Putin’s rule beginning in December 2011, say the trial was a way for authorities to disqualify Navalny from running for political office, particularly for presidential elections set for 2018. The court disputed this Thursday, ruling that there were no political motives to the case.

Observers have compared the trial of Navalny to that of former Yukos CEO Mikhail Khodorkovsky, who is currently in prison on charges many say were meant to stifle his political ambitions.

Fueling that comparison, Navalny has at least one other criminal case open against him, on charges of large-scale corruption and fraud, meaning that he could receive more prison time, just as Khodorkovsky did in a second trial in 2010 after first being found guilty on tax charges in 2005.

Like with the rulings against Khodorkovsky, Western governments condemned Thursday’s verdict in the Navalny trial, saying it appeared politically motivated.

Navalny is perhaps a more established political figure than Khodorkovsky was at the time of his arrest, however, and more openly targets members of the highest echelons of political power in his anti-corruption campaigns. Many see in him the only opposition figure who could realistically gather significant popular support at the polls, although he has never successfully run for public office. 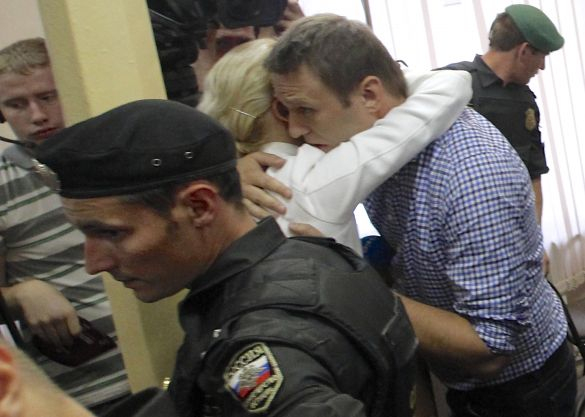 Navalny hugging his wife before being led away in handcuffs Thursday.

“Thanks to Navalny, the surrounding landscape already looks completely different. In a few years, he shifted the conversation about the ‘criminal regime’ from the realm of improbable rhetoric to the plane of material evidence,” wrote Rambler editor-in-chief Yury Saprykin, himself a former opposition organizer, on Lenta.ru on Thursday.

“Navalny showed how to act in conditions when it’s practically impossible to act. They don’t register your party — who needs a party, make it a fund, a headquarters, an interest group, whatever, as long as it works,” Saprykin wrote.

Neither Putin nor other top government officials Navalny has targeted reacted publicly to the verdict Thursday. In the past they have portrayed Navalny as a minor figure who has accomplished little of practical importance.

Navalny and Ofitserov seemed calm during Thursday’s hearing, mostly staring at their cell phones while the judge read out the verdict. Navalny smiled several times and occasionally engaged in short verbal exchanges with his lawyer.

Upon hearing the sentence, however, Navalny abruptly stopped smiling, soon sending out a Twitter post that read: “Okay. Don’t miss me. And more importantly, don’t be lazy — the toad will not take itself off the oil pipeline.”

As the judge uttered the words “take them into custody in the courtroom immediately,” several bailiffs entered and pushed the audience back.

Before being taken away, Navalny hugged his wife Yulia briefly, and Ofitserov held his wife in his arms for several minutes. Bailiffs then entered, placed Navalny and Ofitserov in handcuffs and led them out of the room.

Somewhat unexpectedly, prosecutors appealed the ruling to detain Navalny and Ofitserov before the verdict takes effect, lawyer Vadim Kobzev told Interfax. A Kirov court will consider the appeal on Friday.

Prosecutors had asked the judge to sentence Navalny and Ofitserov, both of whom had pleaded not guilty to the charges, to six and five years in prison, respectively.

Judge Sergei Blinov spent more than three hours reading the verdict at Kirov’s Leninsky District Court while around 100 Russian and foreign reporters listened intently inside the court room and in another room showing a live feed of the proceedings. The judge summed up the 19 hearings of the trial, which began in mid-April. 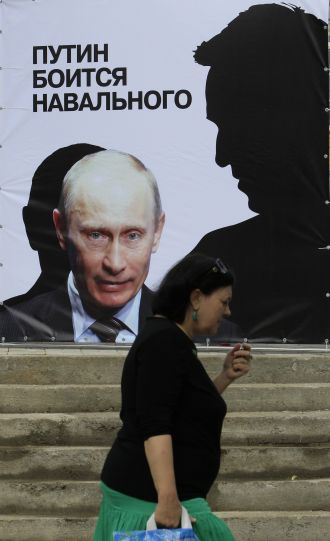 A banner depicting Putin and Navalny reads “Putin is afraid of Navalny.”

Blinov ruled that Navalny, while working as an adviser to Kirov region Governor Nikita Belykh in 2009, and his acquaintance Ofitserov had forced state company KirovLes to sell timber for below-market prices to Ofitserov’s company, VLK, which acted as an intermediary between KirovLes and its customers.

“KirovLes received a smaller profit from working with VLK than it could have received if it had worked with customers directly,” Blinov said. “By the terms of the agreement, VLK did nothing but make money.”

According to prosecution witnesses — heads and employees of KirovLes and forestry enterprises that formed KirovLes — Ofitserov forced them to sign contracts with his company by threatening them with dismissal and “negative consequences from the Kirov governor’s office.”

Navalny disputed that account at previous hearings, saying he had suspected KirovLes management of corruption and citing as evidence the fact that they had received payments for timber in cash prior to signing a contract with VLK.

Navalny also said he had no power to influence the terms of the contracts between KirovLes and VLK, and that managers of both companies acted of their own free will.

But judge Blinov read out e-mail exchanges and telephone conversations between Navalny and Ofitserov in which Ofitserov appeared to seek Navalny’s approval for the terms of the contracts between KirovLes and VLK.

The judge also said Ofitserov had called Navalny his boss, supposedly proving that he answered to Navalny. “Despite the fact that the defendants deny their guilt, the court believes their guilt has been completely proven,” Blinov said.

“Navalny’s arguments about his political persecution have not been substantiated, and it would be strange not to take into account the fact that [former KirovLes director Vyacheslav] Opalev pleaded guilty,” the judge said.

The evidence Opalev presented to the court, which was key in the court’s decision, was found to be “credible, consistent and corroborated by other evidence collected in the case,” Blinov said.

But at a hearing in April, Opalev, who himself was given a four-year suspended sentence in what was believed to be a deal made with prosecutors, provided testimony that was widely regarded as inconsistent. He said he couldn’t remember details from written testimony he provided earlier, attributing it to stress.

At a later hearing, Sergei Shcherchkov, first deputy head of the Kirov region, disputed Opalev’s testimony, saying Navalny never had enough authority to organize the embezzlement he was accused of orchestrating. Shcherchkov said Opalev had a personal conflict with Navalny, as Navalny had sought to fire him.

In reading out the sentence, judge Blinov said the seriousness of Navalny’s crime meant that he couldn’t mend his ways without isolation from society.

“Why don’t we see [Former Defense Minister Anatoly] Serdyukov or Yakunin behind bars, but Alexei, a mayoral candidate, is imprisoned?” Gudkov said.

“Putin’s aim is to get a hold on power with his hands and teeth and I don’t know what else, and keep stealing [from the people],” Nemtsov said.

Navalny’s wife Yulia told reporters after the verdict that her husband “had been certain he would get a real sentence.”

But “if someone hopes that Alexei’s [anti-corruption] investigations will stop now, that’s not the case,” she said, adding that volunteers at his Foundation for Fighting Corruption would continue their activities.

As for Navalny’s political career, it may not be so easy to preserve. In light of the guilty verdict, Navalny’s campaign announced that he would not be running in the Moscow mayoral election, for which he had been officially registered as a candidate on Wednesday.

Leonid Volkov, who was heading Navalny’s campaign, told Interfax after the verdict: “It was preliminarily agreed upon with the candidate that if the sentence included prison time, we wouldn’t take part in the elections.”

Kobzev, the lawyer, said Navalny would announce his decision concerning his participation in the election on Friday through his legal team.

The news of Navalny’s sentencing was met with a flurry of mixed reactions by Russian politicians and cultural figures.

Former Finance Minister Alexei Kudrin wrote on Twitter: “The verdict seems less like a punishment and more like it is aimed at isolating him from society and from the election process.”

Leader of the Liberal Democratic Party Vladimir Zhirinovsky, on the other hand, said on Twitter that the verdict served as a direct warning to “those who are connected with the West.”

In a statement on his website, former oil tycoon and Yukos CEO Mikhail Khodorkovsky called the verdict “predictable and inevitable,” adding that “for Russia, there is nothing unusual in the state convicting political opponents on criminal charges — both in the times of Stalin’s terror, and in the days of Khruschev and Brezhnev, our judicial-legal system diligently displayed opponents of the regime as ordinary criminals, allowing the heads of state to hypocritically make statements about the absence of political prisoners.”

According to Khodorkovsky, the consequences of such behavior always turned out to be the same. “… The more pro-active part of society left in droves or emigrated internally. The country started to self-destruct, corruption flourished, [there was[ budgetary theft and insane mega-projects. And even the most optimistic optimist would start to think: ‘What exactly is the state accomplishing here?’”

“Everything that is known to me about this case — how it started, how it was closed, then opened again later, how the case was heard in court — unfortunately, confirms that we don’t have an independent court,” Gorbachev said on his foundation’s website.

“I am convinced that the use of the court to fight political opponents is impermissible,” he said, adding that since Navalny’s lawyer intended to file an appeal, the story was still far from over.

The next chapter would appear to be protests against the verdict, which kicked off in several places throughout the country after the verdict was read, including Saratov, Tomsk and Moscow, where Navalny told his supporters to rally.

Kirov saw several protests as well. At least 200 supporters of Navalny gathered outside the court building when the verdict was read, chanting “Freedom to Navalny!” and “Putin is a thief!” while several dozen riot police and ordinary police watched them from behind temporary metal barriers fencing off the court’s parking lot.

After the commotion died down, however, one of the only things left from the trial was a huge billboard set up by his supporters. Showing Putin’s face and a silhouette of Navalny’s face looking at the president, it read, presumptively: “Putin is scared of Navalny.”