Education and Science Minister Dmitry Livanov and his deputy Natalya Tretyak will be questioned as witnesses in a reopened case over the alleged embezzlement of state funds during the reconstruction of the National University of Science and Technology.

Livanov, prior to being appointed as education minister, was a rector at the National University of Science and Technology, a position he took in 2007. Tretyak was his deputy at the time. 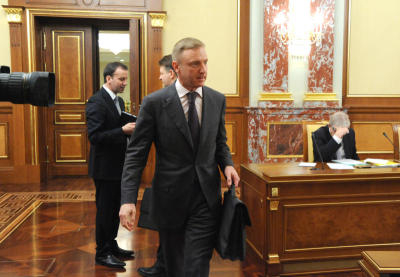 Education and Science Minister Dmitry Livanov, seen here at the State Duma, became rector of the National University of Science and Technology in 2007.

The first criminal investigation into a 12-year reconstruction of one of the buildings of the university was conducted in 2009. Police said the management of the institution had transferred 57 million rubles ($1.7 million) of state funds between 2004 to 2005 to an unknown party that did not take part in the reconstruction. In 2009, the case disappeared.

Investigations continued in June this year after a request to locate the whereabouts of the case was made by State Duma lawmaker and member of United Russia, Vladimir Burmatov.

The earlier case materials did not mention former university rector Livanov and his deputy. Now, however, police say investigators might look into the possible connection of the minister and Tretyak to the case, Kommersant reported.

"The facts referred to in the case happened long before me and the minister took positions at MIS," Tretyak said.

She also said she hoped authorities would be able to shed light on what really happened and the groundless attacks on the minister would stop.

Livanov took office at the Education Ministry just over a year ago. Since then, he has constantly been under pressure, with the unpopular reform of the Russian Academy of Sciences and cheating on the Unified State Exam being the hottest issues.

Livanov has also been subjected to harsh criticism by lawmakers. In April, three opposition parties filed a request to President Vladimir Putin to consider firing the minister.

United Russia's Burmatov has been one of the most persistent of Livanov's critics.

"Livanov should either leave the position himself or sack all those performing a circus around him in the ministry and begin normal, systematic work," Burmatov said at a State Duma meeting in May, RIA Novosti reported.

President Putin so far has not supported the idea of sacking Livanov, stressing that the new Cabinet has been in office for only a year and that the minister has not yet had time to prove his worth.