Speaking at a news conference in Senegal at the start of an African tour, Obama said normal legal channels should be sufficient to handle Washington's request that Snowden, who left Hong Kong for Russia, be returned.

"I have not called President Xi personally or President Putin personally and the reason is … number one, I shouldn't have to," Obama said.

"Number two, we've got a whole lot of business that we do with China and Russia, and I'm not going to have one case of a suspect who we're trying to extradite suddenly being elevated to the point where I've got to start doing wheeling and dealing and trading on a whole host of other issues," Obama said.

Snowden has become an embarrassment for the Obama administration after he leaked details of secret U.S. government surveillance programs. 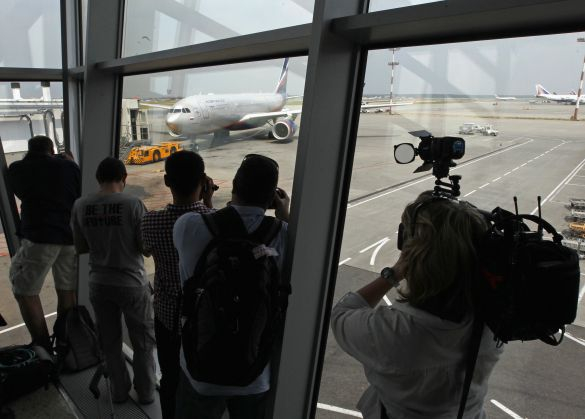 Bystanders and members of the media recording an Aeroflot Airbus A330 leaving for Havana on Thursday. (Alexander Demianchuk / Reuters)

His fate is now the focus of an international wrangle pitting the United States against its frequent opponents in the UN Security Council, China and Russia.

Snowden himself apparently remains in limbo at Moscow's Sheremetyevo Airport, where Putin said he had been waiting in the transit area since his arrival on Sunday. He had been expected to fly to Havana on Monday en route to Ecuador, where he has asked for asylum.

Witnesses said a Russian passenger plane left Moscow for Havana on Thursday without any sign of Snowden on board.

Russia carrier Aeroflot confirmed the plane's departure but declined comment on the passenger list. Airline sources had said earlier Thursday that Snowden had not registered for the flight.

An immigration official said Snowden had not applied for a visa to enter Russia and that he could remain in the transit area "as long as he wants" without applying for a transit visa.

In the Ecuadorean capital of Quito, the government said it had not processed Snowden's asylum request because he had not reached any of its diplomatic premises.

Bristling at suggestions that Quito was weighing the pros and cons of Snowden's case in terms of its own interests, officials also said Ecuador would waive its preferential trade rights under a soon-to-expire treaty with the United States.