ST. PETERSBURG — President Vladimir Putin has sought to rouse investors by pledging more than $13 billion of state money for new infrastructure projects and announcing his blessing of a broad amnesty for jailed businesspeople.

Confidence in Russia has recently come under pressure amid an economic slowdown and the flight abroad of Sergei Guriev, a leading economist who faced a politically tinged investigation in Moscow.

Putin said the government had decided to spend 450 billion rubles ($13.6 billion) from the National Welfare Fund, a stash of energy-export revenues, on three major railroad and highway projects, and he invited foreign investment funds and other businesses to join in.

"All these projects are our proposal for joint work in Russia," Putin said Friday in a keynote speech at the St. Petersburg International Economic Forum. "I repeat, we are ready to spend this money and are interested in reliable, strong and ambitious partners."

Putin said he had met with the leaders of the “largest global investment funds” the previous day and the talks had showed that investment would flow in whenever the government is a partner. He did not name the investment funds, and the Kremlin did not release additional information.

On Friday, Putin said he saw some of the leaders in the hall where he spoke and invited them to team up with the government on the three projects: a high-speed railroad between Moscow and Kazan; an expansion of the Trans-Siberian Railroad in a bid to raise Russia’s profile in Asian trade; and a multilane highway encircling Moscow at a distance of 30 to 70 kilometers from the Moscow Ring Road, The highway would be aimed at easing congestion on existing motorways by handling a bulk of the local cargo traffic.

Putin said that up to half the money in the welfare fund would be invested in domestic projects. The fund had accrued 2.7 trillion rubles ($87 billion) as of June 1, according to the Finance Ministry's website.

In another move that could improve investor sentiment both at home and abroad, Putin announced that a plan to grant an amnesty to thousands of businesspeople was good enough to go ahead with. He asked the State Duma, which is dominated by his allies, to approve an amnesty bill before it leaves for its summer recess on July 14.

Putin rejected a previous amnesty proposal several weeks ago on the grounds that it would release people who had committed grave economic crimes, involving fraud, counterfeiting and threats of violence. Since then, lawmakers have worked with business ombudsman Boris Titov, the initiator of the amnesty plan, to make sure the bill would not release those offenders.

The release of a large number of jailed entrepreneurs would improve the attitude of Russians toward doing business in general, Putin said.

"It's an opportunity to reset a broad range of social relations," he said. 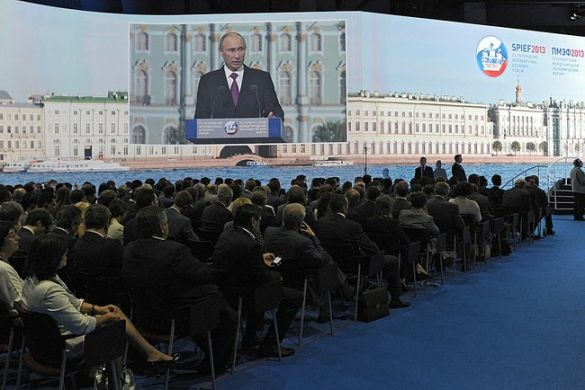 Getting businesspeople out of jail could also earn Russia applause from the West as an effort to improve the overall investment climate. Western perception of the country took a hit earlier this month following the departure to France of prominent economist Guriev, who said he was fleeing an investigation that might unfairly target him.

Putin also offered other promises to investors in a clear attempt to win them over.

He said state-controlled companies, which are often publicly traded, would come under greater pressure from the government to increase their efficiency. Many of those companies, including gas-giant Gazprom, have been losing market value, leaving stains on Russia's image. The government plans to set targets for those companies to attain a certain market value and return on investment, Putin said.

The president announced a five-year timeframe for large state-run companies such as Gazprom and Russian Railways to tame their appetite for price increases. They have been able to raise the rates only in line with the previous year's inflation in recent years and will have to maintain that pattern, providing more certainty for businesses.

Putin also reiterated his commitment to allow companies other than Gazprom to export liquefied natural gas. Gazprom controls the country's only plant that produces LNG, but its rivals Novatek and Rosneft are planning to build their own plants in a few years.

Putin touted the pending change as part of a broader government effort to promote competition on the market.

Regarding privatization, Putin stood by the government's previous statements that it was in no rush to sell off assets and would wait for the right price.

Putin also proposed a merger of the country's two highest courts: the Supreme Court and the Supreme Arbitration Court, which hear general and business-related cases, respectively. The move would consolidate legal practices, he said.

Emerging from the hall where Putin gave the speech, Peter Mandelson, a former European commissioner for trade, said he would like to see prompt action. “The measures that Mr. Putin had listed are urgently needed,” he said. “Mr. Putin, it seems, has responded to people who think that change is due … and the test will be how quickly it is achieved.”

“I don’t see any fundamental changes. It offered only a slight turn toward reforms, and those reforms are too small compared to the serious challenges that Russia faces,” he said.

He described the amnesty plan as confusing, although positive. It will require that an inmate pay off monetary damages to qualify for release, but Kudrin said that not all cases involved damages.

In a further swipe at the speech, Kudrin said drawing money from the National Welfare Fund could jeopardize the disbursement of retirement payouts in the future. The fund serves as a backup for the Pension Fund, which has been running increasing large deficits lately.

But Steven Palstermans, head of Strategic Financial Initiatives, Russia & CIS, said Putin had delivered the message that he had hoped to hear. “Putin has a strong will to change things and integrate Russia into the world economy,” he said.

Yekaterina Kravtsova and Ivan Nechipurenko contributed to this report.