Contribute Today
By Andrei Muchnik
May 30, 2013

With new art spaces opening every month and many must-see shows going on simultaneously, it's becoming increasingly hard to decide which one to visit in your free time. The weekend is no longer sufficient, and even diehard contemporary art lovers can be overwhelmed by choice.

So sometimes, instead of walking through every exhibit in one particular museum or gallery, it makes more sense to stop at only the most interesting displays, and then move swiftly on to the next place on the list. At the same time you can take the scenic route, and enjoy the sights, too.

If you start from Polyanka metro station you can easily get to Udarnik (2 Ulitsa Serafimovich), a major accomplishment of the Soviet avant-garde. It's adjacent to the famous Embankment House ("Dom na Naberezhnoi") an imposing edifice erected for the Communist Party elite in the early 1930s. Many of its residents disappeared during the later purges. Udarnik became the main venue for the movie premiers in the Soviet era, then a flagship dealership of Logovaz, Berezovsky's auto empire in the 1990s, then a casino. It is now being redesigned into a contemporary art center by the Artchronika Cultural Foundation

Bruskin explores various Soviet archetypes, which is only fitting for Udarnik. After climbing the stairs to the third floor, you can inspect what looks like a real archeological dig from the balcony. Everything is upholstered in black; the atmosphere is dark and eerie. Going downstairs through an exit at the further end enables you to explore the setting further.

Thirty-three bronze figures equal to the number of letters in Russian alphabet are meant to remind the spectator of the Soviet subconscious. Bruskin first made sculptures, destroyed them, put them together again from the debris and then cast the pieces in bronze. He buried the final figures in Italy and waited for three years. After the excavation he arranged them into this semblance of an archaeological dig. Among the figures of a bride and groom are a variety of individuals: bureaucrat and prisoner, schoolgirl and marshal. 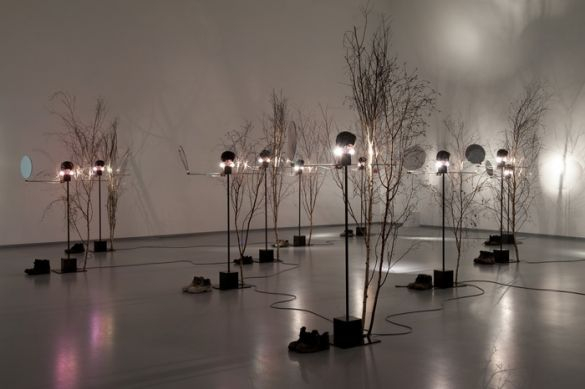 An orchard-like installation, 'The Raven Tree,' is now showing at MAMM. (MAMM)

Walk around the Embankment House, cross the river over the Red October complex, pass by the massive Christ the Savior (also known as the Pussy Riot church) and turn on to Ulitsa Ostozhenka, dubbed the golden mile of Moscow for the exorbitant real estate prices. A couple of blocks down you will reach the Multimedia Art Museum, Moscow (16 Ulitsa Ostozhenka).

Horn is a recognized classic of contemporary art. First known as a performance artist, she has also created mechanisms and installations symbolizing intricate relationship between both animate and inanimate worlds. The exhibition at MAMM showcases each of these aspects of her work. Short films and photographs documenting her performances are on display, as well as complex installations.

The Raven Tree with golden colored metallic branches ending in opening and closing beaks, and Will-o'-the-wisps with a small grove of trees, each equipped with moving mirrors and lights,  are my personal favorites. One object was specifically prepared for MAMM, "The Suitcase of a Refugee," a kinetic installation that moves a torn suitcase up and down on a rod between the floors.

Walking back towards Christ the Savior, all the way down Ulitsa Volkhonka and continuing on Mokhovaya Ulitsa you can admire the Kremlin and its Borovitskaya Tower as you walk.

Pass by the magnificent Pashkov House and the minimalist entrance to Borovitskaya metro station, then the Lenin Library and finally cross the street to Manezh (1 Manezh Ploshchad).

Among several exhibitions at Manezh that can easily take a couple of hours each to see, the best choice is "The Crossing Lines" by Chiharu Shiota. Several white dresses reminiscent of both wedding gowns and funeral shrouds are hidden inside a mishmash of black wool cobwebs. They fill an enormous space on the third floor.

The installation represents interconnectedness between our life and afterlife. Eighty volunteers helped create the installation in just eight days while visitors watched the process. Now, there is a time-lapse video on display.

For the last stop on the tour, cross the Manezh Square, pass by the "zero kilometer" and through the Resurrection Gates onto Red Square. Enter GUM (3 Red Square), which since last year houses the Pobeda Gallery known for exhibiting cutting-edge art. Pobeda, located on the third floor of the third line of GUM, is currently showing Mireille Loup's latest project "53.77."

It's a series of black and white blurry images of a young girl and a 10-year-old boy. That is, until you notice a stack of red and cyan anaglyphic glasses on the table in the center of the room. When you put them on you will find yourself literally inside Loup's artworks. Different layers of the photographs move along as you move in front of them. If it's your first experience with 3D photography, you will be truly amazed by its ethereal, mysterious quality.