An impressive display of elegant costumes, classic ballroom dances, and a spread of fine food and wine invaded Moscow's Gostiny Dvor on Saturday at the city's 11th annual Viennese Ball.

Recognized as the biggest ball in all of Russia and attended by nearly 2000 people, the white-tie event is also one of the widest-scale functions of its kind in the world, having outdone itself in opulence each year since its first occurrence in 2003. It is now central to Russia's high-end cultural and social life.

Last year's ball marked the 200th anniversary of the Battle of Borodino — a bloody day in both Russian and French history and a turning point in Russia's defeat of Napoleonic forces in 1812.

This year's ball fell on an even more significant date, coinciding with the anniversary of the crowning of the first Romanov king.

From this point onwards in Russia, the Romanov dynasty ruled for over three hundred years," said ball director Alexander Smagin. "Through this dynasty, many glorious pages of our history are connected," he said.

The ball was officially opened by pairs of young debutantes dancing together — around 100 in total — with the women clad in long white dresses and the men in the traditional tails.

Each had to go through a strict selection process and dancing classes, with young hopefuls being screened on the basis of their education, knowledge of foreign languages, training, and of course, looks. An age limit of 23 was also in place for the each female debutante, while the men could be as old as 28.

"Competition among the debutantes are so high that, in fact, we often have to refuse very worthy candidates, and for me it is always a painful experience," said Smagin, mourning that a slightly "sick" theme was touched upon. 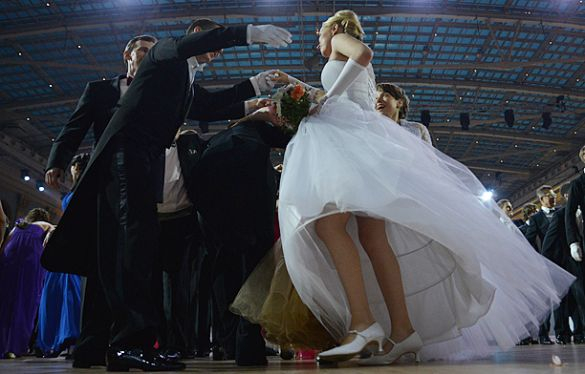 The frivolities lasted until 5 a.m. on Sunday, when tired guests departed. (Albina Starkova / For MT)

"When you see so much hope in their eyes and realize that you will not let the dream come true... On the other hand, it is always a joy to communicate with such wonderful young people. Our newcomers — they are the true color of the Russian youth!"

President of Russia's Dancing Union, Stanislav Popov led the dancers in a midnight waltz, polkas and gallops — many of which are Smagin's favorites. "Of course, I do not miss opportunities to dance. The harmony of movement and music gives extraordinary pleasure and a special feeling of life. I prefer European dances — waltz, tango, foxtrot," he stated.

With tickets ranging from 9,000 to 48,000 rubles, entrance was not cheap. However, proceeds from the event are being donated to charitable child aid projects, and the price bought with it some first-rate performances from soprano Ljuba Kazarnovskaya, and baritone Dmitri Hvorostovsky.

"This year we also celebrated the arrivals of Jose Cura and the Vienna State Opera soloist Daniela Fallot's at the ball," said Smagin. Since the first ball, special guests have also included tenors such as Roberto Alagna and Marcelo Alvarez.

The event was first conceived circa 2001, according to Smagin.

"The idea was born at a time when I published the magazine called "PAB" ("Politician, Actor, Businessman"). In 2001, I published an article in the magazine about the Vienna Opera Ball, and was fascinated by its history. It seemed to me that Moscow lacked such an event." He likened his motivation to that of a child getting carried away by his imagination "into the unknown."

There are ambitious plans in place for further balls this year; it will debut in London come winter time.  "Oct. 24 is the seventh Moscow Ball in Vienna, Nov. 2 will be the Second Russian Ball in Biarritz, Dec. 14 will also be the second Russian Ball in Montreux. And then will be our first mega-hit Russian Ball at the Royal Albert Hall in London," Smagin finished.