Contribute Today
By Yekaterina Kravtsova
May 21, 2013

Alexei Navalny, the opposition leader currently on trial for fraud, has expressed certainty that he has slim chances of getting a not guilty verdict, and he is almost certainly right.


The inevitability of the ruling is not due to the fact that he is such an outspoken critic of President Vladimir Putin, or because his judge in the trial in the provincial town of Kirov is Sergei Blinov, who has not issued a single acquittal in his six-year judicial career.

It is because, according to official statistics, only 1 percent of verdicts passed in Russia are not guilty.

For Navalny, who recently announced presidential ambitions, a conviction would mean becoming ineligible to run for political office, and the worst-case scenario for him is that he would spend the next 10 years behind bars.

Ironically, even though rallies organized by Navalny called for fair elections and Putin's resignation, polls show that the main demand of demonstrators is fair trials, something Navalny is now seeking for himself. According to a poll conducted by the Levada Center at the March of Millions last September, 44 percent of respondents said society needed judicial reform more than anything else. 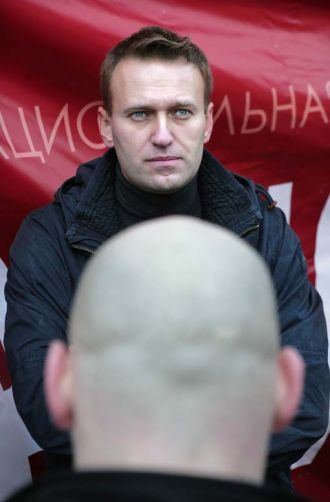 Navalny, pictured at a nationalist rally two years ago, has said he is sure that he will be convicted. (Igor Tabakov / MT)

Some sources say even the official 1 percent of not-guilty verdicts is an exaggerated figure. Rospravosudiye, an online resource that provides information on Russian courts, says an average of only one in 500 sentences is an acquittal.

The same statistics show that of the 8.5 million verdicts issued last year, only 1,087 were acquittals, meaning that only 0.01 percent of verdicts were not guilty.

The courts provide different statistics, however, which show that the number of not-guilty verdicts rose last year.

When presenting an annual report on the work of courts in January, Olga Yegorova, chief judge of the Moscow City Court, said Moscow courts had experienced a boom of not-guilty verdicts last year.

According to Yegorova, 17 of 147 verdicts issued by the Moscow City Court were acquittals. And although Moscow courts on the whole usually issue 20 not-guilty verdicts a year, she said, there were more than 150 last year.

In early February, the Investigative Committee gave an account of its work that appeared to contradict Yegorova's information, saying the number of acquittals in Moscow decreased threefold last year.

The disparity in statistics of courts and law-enforcement agencies may stem from the former's desire to demonstrate its fairness and the latter's to enhance its performance indicator.

Commenting on the fact that Russia and Japan have the same percentage of acquittals, Kolokolov said Japan shared a similar not-guilty rate because "the quality of investigation is high in Japan, which means only those cases that can lead to conviction are passed to the court."

"Russia has the same system — most cases are closed before they go to court," Kolokolov said.

As for the U.S., which official statistics say has a rate of up to 25 percent of not guilty verdicts, the two are incomparable.

According to Kolokolov, "It's erroneous to compare [Russian] figures with the U.S., because all cases are considered publicly there."

In Russia, if a prosecutor feels that a court will pass a not guilty verdict, he can opt not to sign an indictment and thus not pass the case to court, making guilty verdicts more likely in court cases.

Moreover, for a prosecutor, an acquittal often means the loss of a monthly bonus or even an admonishment, said a former Interior Ministry official who requested anonymity to speak freely.

"The official reason is, of course, not a not guilty verdict, but something like a decline in statistical figures," he said.

Kolokolov said a large number of acquittals would be a sign of law enforcement authorities doing bad work, because it would mean they were wrongfully accusing people of crimes.

"What would people say? 'Let's put them in prison instead?'" he said. 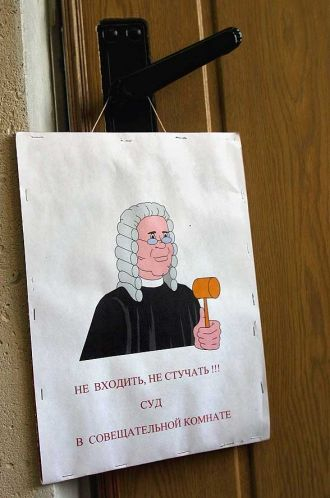 A sign hanging on the door of a Rostov-on-Don court reading, "Don't enter, don't knock!" during the murder trial of Colonel Yury Budanov in 2003. (Igor Tabakov / MT)

The issue of such a large number of guilty verdicts has not gone unnoticed by the country's leaders, who seem to be aware that the integrity of Russia's justice system is one of the main concerns of foreign investors.

During his visit to the 2013 World Economic Forum in Davos, a meeting attended by many politicians and foreign investors, Prime Minister Dmitry Medvedev addressed the issue of Russia's high rate of guilty verdicts, calling it an "issue of political and legal consciousness."

As one explanation for judges' frequent guilty rulings, Medevedev said "judges are almost ashamed of not-guilty verdicts, as it calls the work of investigative agencies into question," Swiss newspaper Neue ZЯrcher Zeitung reported in January.

Cooperation that is too close between law enforcement authorities and courts has been confirmed by observers, with prosecutors and investigators no longer making a secret of it.

As an example, he cited hearings in the high-profile Bolotnaya case, in which nearly 30 people have been charged with or convicted of participating in riots on Bolotnaya Ploshchad last May at a protest rally on the eve of Putin's inauguration.

"They are not even prosecutors, but more like court officials, and it's no secret that when there are vacancies in courts they are filled with prosecutors," Kudneyev said. "We have a common mentality," he added.

Anatoly Yakunin, a top Interior Ministry official, said at the same meeting that he aimed to continue cooperation with courts, emulating his predecessor and current Interior Minister Vladimir Kolokoltsev.

"This love will continue. We can't exist without one another — that is a fact," he said, adding that law enforcement officials often needed consultations in courts.

The former Interior Ministry official said the Investigative Committee makes frequent phone calls to Moscow courts to ask judges what is missing in a given case to secure a guilty verdict.

Veteran trial lawyer and human rights activist Valery Borshchyov said investigators have a direct influence on courts in Russia. "An investigator is the dominant person in court. The judge accepts the detention measures suggested by investigators; he protects him from the wrong questions and witnesses. The investigator is the main person encroaching on justice [in courts]," he said.

Even former judge Kolokolov acknowledged that the function of courts had become limited to imposing penalties.

"Yes, it's obvious, but that investigators may fabricate evidence or something else is a different matter," he said. "If it's needed to convict someone, [a prosecutor] will work to make it happen. A judge wouldn't convict anyone in advance or make something up in place of investigators and prosecutors."

But more often, Kolokolov said, there is simply psychological pressure on judges. "Imagine you're a judge in a district court and you receive a criminal case that says it was investigated personally by Investigative Committee head Alexander Bastrykin, and the charges were approved by Prosecutor General Yury Chaika. Is it possible that this paper wouldn't influence the judge's decision? It's purely a psychological influence; no one actually forces a judge to violate the law and pronounce a guilty verdict."

Anna Stavitskaya, a prominent defense lawyer who has worked for the family of assassinated journalist Anna Politkovskaya and relatives of Polish officers killed in Katyn in 1940, said charges for economic crimes like fraud and embezzlement, which Navalny is charged with, are the most politically tinged.

An analytical report by the European University in St. Petersburg published in January 2010 said police began to open criminal cases into economic charges more often in the 2000s, leading to a growth in the number of solved cases and court rulings.

"Up to 70 percent of economic cases are ordered cases," Borshchyov said.

"Economic charges can be applied to many people, making it easy for police to use such charges for political purposes," Stavitskaya said. 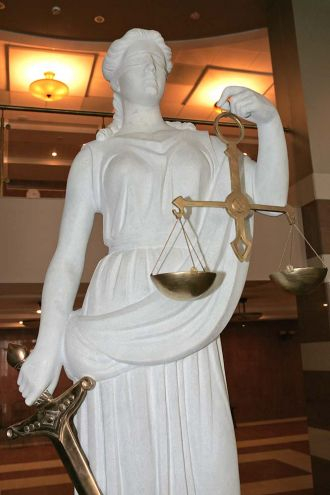 Guilty verdicts issued by courts may differ significantly, often giving the impression that some people can avoid imprisonment even if they commit a serious crime.

In 2011, the Zamoskvoretsky District Court passed a suspended sentence to a former member of the Federation Council from the Kalmykia republic, Igor Provkin, who had beaten and raped a 24-year-old woman. He told the court that he had been suffering from stress because his wife gave birth that day, and the court considered that an extenuating circumstance.

Another illustrative case took place in 2010, when a United Russia municipal deputy in the Krasnodar region, Sergei Tsepovyaz, was issued a fine of 150,000 rubles ($5,000) for helping Sergei Tsapk, the head of a local criminal gang, to conceal incriminating evidence related to the killing of 12 people.

According to Stavitskaya, suspended sentences are a very rare practice. They are passed either when a person is obviously guilty but his connections in business or politics help him to avoid penalty, or when there is no evidence at all but a person "must" be convicted, for political or other reasons.

At the same time, judges may recuperate for this by giving a real prison term to an ordinary person who's committed a less serious offense.

In 2008, an Altai region court sentenced Mikhail Gavrilov to two years in prison for picking 35 flowers from a neighbor's garden. The court said the damages of 5,000 rubles that Gavrilov caused to his neighbor were enough to put him behind bars.

Borshchyov said that up to 10 percent of not-guilty verdicts were passed by jury courts, but he warned that the Supreme Court wanted to decrease the number of cases juries were eligible to hear.

But some say even juries' decisions can be biased. Stavitskaya said the most vivid example, when she was absolutely sure of her client's innocence but the verdict was guilty, was the trial of Igor Sutyagin, a military expert who was convicted of espionage in 2004 for revealing purportedly classified information to a London-based company.

Observers and some of Sutyagin's colleagues said the information was publicly available and that the charges were unreasonable.

Stavitskaya said the jury's guilty verdict in the case — which saw Sutyagin charged with high treason in 1999 — was one of the most outrageous moments in her practice.

"I knew he was innocent and was absolutely sure we'd win," she said. "It came out later that a former External Intelligence Service official had been planted in the jury," she said.

In 2010, then-president Dmitry Medvedev granted a pardon to Sutyagin, who had spent 11 years in prison.

Stavitskaya believes the only way to win in Russia's justice system is by submitting complaints to the European Court of Human Rights.

In 2012, after Stavitskaya's complaint, the Strasbourg-based court acknowledged that the pre-trial detention of Sutyagin was unlawful and imposed on the Russian government an obligation to pay џ20,000 ($26,000) to Sutyagin as compensation.

"Some choose to give bribes in order to win. Prosecutors may offer defendants the chance to pay a bribe and promise an acquittal in return, but they usually lie, so even a bribe doesn't help secure a not-guilty verdict," Stavitskaya said.

Stavitskaya said she feels angry when she realizes that she is participating in a trial and knows there will be a guilty verdict.

"It turns out that the knowledge I gained when studying law at university is not even needed; all the time spent preparing for a trial, everything that is written in our codes is absolutely not needed. It's a shame that our laws are abandoned in courts," she said.