WASHINGTON — The embarrassing arrest of a suspected CIA officer in Moscow is the latest reminder that, even after the Cold War, the U.S. and Russia are engaged in an espionage battle with secret tactics, spying devices and training that sometimes isn't enough to avoid being caught.

The most recent skirmish involves Russian security services ambushing a 29-year-old diplomat who they say was trying to court a spy. The Russians said Ryan Fogle was caught red-handed with a recruitment letter, a compass, two wigs and a wad of cash. The Russians published photographs of his arrest and displayed all his supposed spy gear for the world. It was intended as proof to the public that the young diplomat was in fact working for the CIA: Gotcha.

The most recent spy scandal is only one in a long series of such incidents going back to the Cold War, and the tactics haven’t changed much.

None of these tactics are new. Humiliating and outwitting the other side is a tradition that extends back decades. In 1977, the KGB arrested a pretty blonde named Martha Peterson in Moscow trying to leave a message for an important spy, code-named Trigon. Just as in the case of Fogle, the Russians were waiting with cameras when they nabbed Peterson. Eight years later, the KGB filmed the arrest of A.G. Tolkachev, a top CIA spy, which it later made available to Russian television.

In a case that made headlines across the world, the FBI in 2010 wrapped up a ring of sleeper agents it had been following for years in the United States. The Russians were not amused. Eventually the sleeper agents, including Anna Chapman, who later posed for a magazine cover in lingerie, were returned in a swap.

These are the perils of working overseas. "I was angry," Peterson recalled in interview. "I was caught with things in my possession too. That is a bad feeling."

The idea is not to get caught. But that's easier said than done. The Russians are famously adept at identifying and catching spies. The Russians have netted at least a dozen agency officers conducting clandestine activities over the years, former CIA officials said.

To reduce its exposure, the CIA goes to great lengths to train its officers to avoid what happened to Fogle — if he was doing what the Russians said. 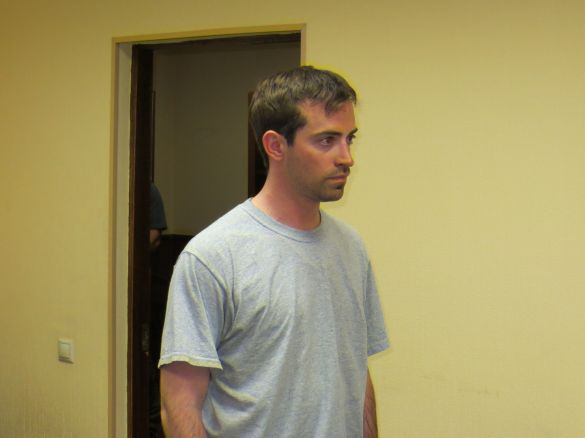 Agency officers undergo intense training at the CIA spy farm in Virginia, taking what is known as the "field tradecraft course." It's a basic spy course in which agency officers learn to identify when they're being followed. In CIA jargon, they're taught to perform surveillance detection runs. They are supposed to perform these before a mission. The rule of thumb: If a CIA officer sees something twice over time and distance, he or she is likely being watched.

For those being deployed overseas to places like Moscow, they receive further training, including a hostile environment tradecraft course. FBI agents in Washington and New York, who have the most experience following spies, put rookie case officers through their paces. These FBI agents are also trained by the CIA. They play rough, giving the young agency officers a taste of what Fogle likely experienced. The course formerly was known as "internal operations" for CIA officers living behind the Iron Curtain.

The wives or husbands of agency officers stationed in Moscow also took the course. Everyone was expected to be prepared.

Despite precautions, Moscow is a place unto itself. Former agency officers call them "Moscow rules" because of the complex cat-and-mouse games. It can be a hard place to do business, perhaps one of the toughest places in the world to recruit agents. In the past, paranoia has swept through the CIA station in Moscow.

In the late 1980s, when the Cold War was still raging, the Moscow station was practically paralyzed, believing its officers were under constant surveillance. There was no way they could leave the station and recruit people without being spotted. Operations almost came to a halt. By the early 1990s, after the fall of the Berlin Wall and the dissolution of the Soviet Union, the CIA figured out it could do business again in Moscow.

The agency officers in Moscow developed a list of quirky indicators to help determine whether they were being followed. A former CIA officer, speaking on condition of anonymity because he wasn't authorized to discuss intelligence operations, recounted that the Russians tended to use cars so inconspicuous that they were conspicuous. There were always two Russians in the car in case one needed to get out on foot. At a red light, they behaved like they were parking rather than stopping at the light. The CIA determined that certain cars with an inverted pyramid on the front grill were used by the KGB.

One former agency officer said he never took shortcuts in Moscow. He would run detection routes that could last hours. The final step involved leaving a car and riding public transportation. Then and only then, eventually moving on foot, would he secretly meet a source. Another agency officer used his wife as a decoy to distract the KGB when he left secret messages. 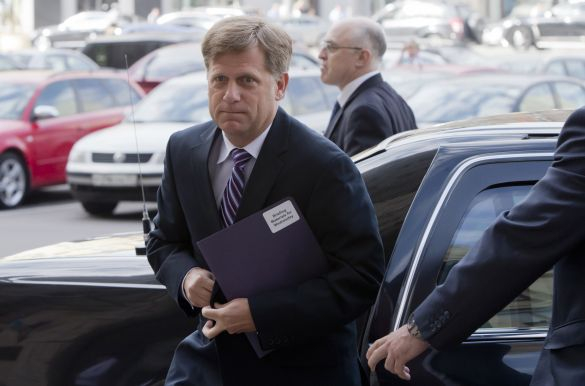 U.S. Ambassador to Russia Michael McFaul arriving at the Foreign Ministry in the wake of the recent scandal. (Misha Japaridze / AP)

Persuading the Russians to stop following agency officers sometimes meant boring them. If the Russians believed it was another routine day — walking the dog, grocery shopping and taking the children to the park — they might abandon their surveillance.

To beat the Russians, they also relied on technology. The U.S. government had cracked many of the Soviet Union's encrypted frequencies they used to conduct surveillance. An agency officer using an earpiece could sometimes determine whether chatter about making a "left" or "right" was about him and safely abort his mission.

Even with precautions, Peterson said there are things a spy doesn't know. She had no idea the Russians had learned the identity of Trigon. They knew she was leaving something for him at a designated place at a bridge. They were waiting for her with cameras and flashbulbs when she arrived one summer's night in Moscow. After groping her, KGB agents found a small receiver she had hidden. She was questioned for hours then kicked out of the country.

Later, she found out the CIA had itself been compromised. In 1984, the FBI arrested Karl Koecher after learning he was a KGB mole who once worked for the CIA as a translator. Koecher had a played a role in Trigon's downfall and ultimately in Peterson's arrest.

"I had that feeling I had made a mistake. But it was clearly an ambush in my case," said Peterson, who published a book last year about her experience, "The Widow Spy."

Almost a year after she was caught, the KGB in 1978 publicly revealed Peterson's CIA employment, payback for the FBI disclosing the arrest of three Soviet spies in the U.S. Newspaper reports carried the Soviet claim that she was a "CIA agent" who was involved in a plot to poison one of their citizens. She worked for the CIA but the rest of the story was fiction.

Fogle was waylaid, too, raising questions about what happened. Former CIA officials said that little about his case makes sense. Disguises are typically used to leave the U.S. Embassy in Moscow and sneak past nearby Russian observation points. But once an officer runs the final phase of his detection route, there would have been no need for a wig, much less two.

"I say it would be extremely unusual unless you had 150 percent confidence in the relationship," said Joseph Wippl, a former senior CIA clandestine officer who has worked overseas.

Fogle could have been tempted by a provocation or dangle, something that has always worried the CIA, especially in Russia. Someone could have provided the CIA such sensational "feeder" information that the CIA couldn't resist trying to send a message to the possible recruit in a predetermined place. But the Russians would have been waiting.

Why the Russians made a show of Fogle's arrest is unclear, even as it's happened in other cases. Were they sending a message to the U.S., expressing diplomatic displeasure?

The CIA has declined to comment on Fogle's arrest.

Not every blow-up like Fogle obviously makes the nightly news. In 1988, the KGB executed Soviet Gen. Dmitry Fyodorovich Polyakov for being a spy for the U.S. government, which had code-named him "Tophat," ''Bourbon" and "Roam." Afterward, according to two former CIA officials, the KGB sent a video of his execution to the CIA.

Putin said the U.S. is “attempting to prolong” the war in Ukraine and spread “chaos” by provoking conflict between China and Taiwan.
black smoke

Three Britons, one Swede and a Croat could face the death penalty in Donetsk.