Contribute Today
By Alexander Winning
May 13, 2013

The Federal Security Service said Tuesday that it had detained a CIA agent as he tried to recruit a member of Russia’s secret services, dealing a fresh blow to already strained U.S.-Russian relations.

Russian counterespionage agents detained the U.S. agent, identified as Ryan Fogle, during an operation late Monday night, the FSB said in a statement on its website.

He was carrying technical equipment, instructions for the recruited Russian citizen, a large sum of money and disguises, the FSB said, adding that he had been handed over to the U.S. Embassy, where he works as a third political secretary.

Tuesday’s announcement comes days after the U.S. and Russia formally agreed to increase cooperation between their security services in the wake of last month’s Boston Marathon bombings and jointly organize an international peace conference to seek a solution to the two-year Syrian conflict.

An analyst said the timing of the announcement would likely torpedo security-service collaboration between the two countries, while security experts were unconvinced by the FSB’s story. 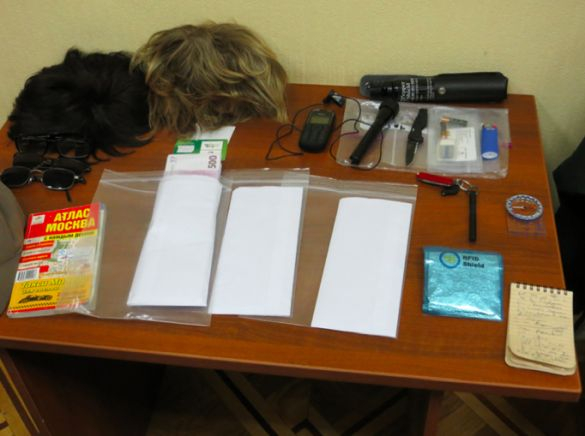 A handout FSB photo showing a table covered with with items that the FSB said it found on Fogle. (FSB / RT)

The Foreign Ministry has summoned U.S. Ambassador to Russia Michael McFaul for questioning over the spy scandal, declaring Fogle a “persona non grata” and calling for his immediate withdrawal from Russia in a statement on its website.

“Provocative actions of this sort, which recall the Cold War era, by no means help strengthen mutual trust,” the ministry said.

McFaul refused a request for comment from The Moscow Times, replying during a Twitter question-and-answer session: “No.”

At a July 2011 event at Spaso House, the U.S. ambassador’s residence, Fogle told a Moscow Times reporter that he had recently arrived in the Russian capital to work in the embassy’s political department.

Minutes after the FSB released its statement, state-run TV channel RT published a photo that appeared to show Fogle being detained in a blond wig. 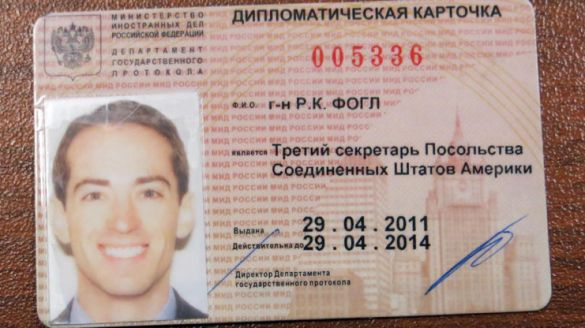 Other photos showed a wad of 500 euro ($650) notes, miscellaneous objects including a flashlight, map and compass, Fogle’s diplomatic identification card, and a letter opening with “Dear friend” apparently intended for the Russian recruit.

According to the ID card, Fogle was accredited as a diplomat from April 2011 to April 2014. The letter said the CIA was willing to offer the unidentified Russian recruit a salary of up to $1 million a year plus bonuses for long-term cooperation.

Gennady Gudkov, a former State Duma deputy and KGB colonel, reacted with skepticism to the FSB’s claims that it had intercepted Fogle, saying that recruitment is typically conducted with great subtlety and that Russian counterespionage efforts are focused on stopping Russians, not foreigners.

“When I worked in the Soviet KGB, we always caught people for concrete crimes, such as passing on state secrets, receiving payments and so on,” he said by phone.

Mark Galeotti, a professor at New York University who studies Russian security agencies, wrote on Twitter that Russia’s handling of Fogle’s detention showed “it was a political decision that must have been made at or near the top.”

More than two decades after the end of the Cold War, U.S. and Russian operatives still gather intelligence in each other’s countries. In 2010, 10 Russian agents including Anna Chapman were deported from the U.S. in exchange for four Russians jailed for allegedly spying for the West.

Given existing tensions between the two countries, which have clashed in the past year over issues including Syria and a perceived crackdown on civil society in Russia, political analyst Georgy Bovt said the spy scandal would further strain U.S-Russia ties.

“Without a doubt, [the scandal] will negatively affect relations,” said Bovt, a Moscow Times columnist, adding that collaboration between U.S. and Russian security services would likely be put on hold.

U.S. Secretary of State John Kerry and Foreign Minister Sergei Lavrov would probably discuss the scandal at a meeting in Sweden this week, Bovt said. It was Kerry and Lavrov who announced closer security-service cooperation in Moscow last week.

Pavel Salin, director of Moscow Financial University’s Center for Political Research, had a more optimistic prediction, saying the impact on U.S.-Russian ties would be minimal, since there is little objective evidence with which to verify the FSB’s outlandish claims.

“Now if the FSB had caught a U.S. agent financing the Russian opposition, that would have been a real scandal,” he said.

President Vladimir Putin on Tuesday backed a plan to set up joint military training centers with Belarus, with fears mounting that Minsk could enter the...
risk to civilians

The Russian economy is predicted to grow 0.3% in 2023 despite setbacks from unprecedented Western sanctions over the Ukraine invasion, according to data...