President Vladimir Putin pledged to stay the course on a range of key issues, from macroeconomic policy to the battle with corruption and the composition of Prime Minister Dmitry Medvedev's Cabinet, during a record-breaking live call-in show broadcast on national television on Thursday.

The annual show, which lasted an unprecedented 4 hours and 47 minutes, saw a confident and apparently untiring Putin field 85 questions selected from about 3 million requests, another record, from Russians across the country and many walks of life.

Despite the Russian economy's sluggish growth and continued reliance on natural resources, the government's fundamental economic policies will not change, Putin said, adding that officials will continue to focus on macroeconomic indicators and push manufacturers to meet social demands.

The government will also concentrate on improving the business climate, which has gotten better recently, Putin said, citing international ratings without specifying them. Likewise, it has become easier to open a business and connect to the country's infrastructure, he said.

The president says that despite sluggish growth and reliance on natural resources, basic economic policies will not change.

And while the Cabinet, especially Education Minister Dmitry Livanov, has recently faced intense criticism by the public and the ruling United Russia party, Putin argued that a reshuffle would do more harm than good and that the government, less than one-year-old, deserved more time.

A recently leaked video of Putin upbraiding a group that included ministers and governors for poor performance fueled speculation about the future of Medvedev's Cabinet.

Foreign policy did not figure largely into the program, but Putin reserved some sharp words for the United States, saying that the U.S.-Russian relationship had suffered since the 2003 invasion of Iraq from Washington's foreign policy and most recently from the Magnitsky Act.

Putin said the law, which calls for sanctions against Russians suspected of human rights abuses, was "imperialist." He added that the Magnitsky Act represented a missed opportunity to "forget everything from the Cold War era" after the repeal of the Jackson-Vanik amendment, which restricted bilateral trade, paved the way for Russia's accession to the World Trade Organization.

But he said the two sides must unite to combat terrorism in the wake of the Boston Marathon bombing, which U.S. investigators say was carried out by two ethnic Chechens with strong ties to Russia's North Caucasus region, home to a long-simmering Islamist insurgency.

"I simply hope that this tragedy will push us closer together in the struggle against common threats. … If we truly join forces, we won't suffer such strikes and losses," Putin said.

He accused Western journalists of using a double standard by referring to terrorists that attack Russia as "rebels," and chided Western countries for what he called "sometimes indirect and sometimes direct" informational, financial and political support to extremists in Russia. 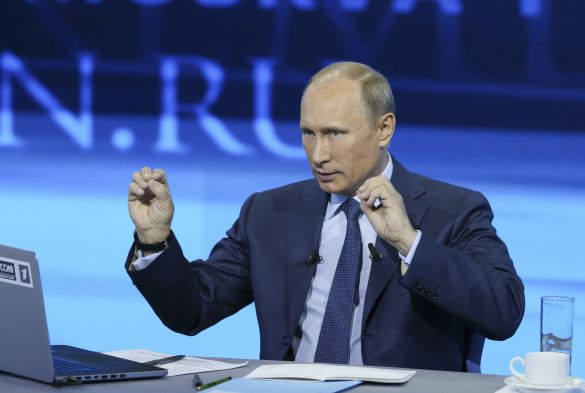 Putin responding to a question during his live call-in show on Thursday. (Mikhail Klimentyev / RIA-Novosti / Reuters)

Democracy and opposition politics featured largely in last year's event, a press-conference instead of a call-in show, but with street protests having subsided and civil society leaders complaining of unprecedented government pressure, Putin answered only one question on the subject this year.

He denied that there are political prisoners in Russia, likening jailed members of the anti-Putin punk band Pussy Riot to people who deface soldiers' graves, and urged supporters of the non-parliamentary opposition to form political parties and present constructive suggestions, rather than just criticism.

Asked how to become president, Putin recommended founding a party and stressed the importance of proving the desire and ability to "serve your country."

As Putin answered questions, the man some see as his greatest political foe, opposition leader and anti-corruption blogger Alexei Navalny, stood trial in a Kirov courtroom on embezzlement charges that he and his supporters say are politically motivated, an irony that was not lost on at least one questioner.

"People fighting against corruption must be crystal clear, otherwise it's PR," Putin said when asked about the case. "Nobody should be fooled into thinking that if you shout, 'Catch that thief!' you yourself are allowed to steal. … Incidentally, I told the General Prosecutor's Office and other agencies that everything should be objective [in the trial]," he said in comments likely to be seen as a signal.

In 2011, Putin appeared to use the call-in platform to signal that jailed billionaire Mikhail Khodorkovsky, then on trial for theft and money-laundering charges, would be convicted. "A thief should be in jail," Putin said, quoting a well-known film. Two weeks later, Khodorkovsky was sentenced to an additional six years in prison.

Putin also seemed to foretell a grim future for State Duma Deputy Ilya Ponomaryov, one of a handful of lawmakers to support street protesters, who figures largely in a recently launched criminal case into payments he received from the state's Skolkovo innovation hub for lectures and research.

"If it's not clear why somebody was paid … then this should be sorted out," Putin said, voicing concerns that have been raised about Ponormaryov's educational credentials and the lectures, which investigators said were never given. Putin said he wasn't confirming the accusations.

He suggested that the case was part of a larger corruption effort that he said nabbed 800 officials, including high-ranking officials, last year, including then-Defense Minister Anatoly Serdyukov.  Corruption must be fought just as resolutely as inflation, Putin said.

The program also saw revelations about self-exiled tycoon Boris Berezovsky, 67, who was found dead in his Berkshire mansion in a possible suicide.

Putin for the first time commented publicly on a hand-delivered letter the Kremlin said he received from Berezovsky in which the businessman-turned-Putin foe is said to have admitted mistakes and asked for forgiveness and the right to return to Russia, where he was a wanted man.

He explained that there were two letters, not one, the second arriving after Berezovsky was found dead in his British mansion in March. Putin said he did not respond to them and thanked God that he had resisted public pressure and the advice of people close to him to publish them.

One questioner challenged the fast-track citizenship provided to French actor Gerard Depardieu. Putin defended the move based on what he said were Depardieu's great contributions to Russian culture — including an upcoming film in which he's to star as the Tsarist-era Russian mystic Grigory Rasputin.

The actor is an "impulsive man," Putin said. He hinted that other VIPs had inquired about receiving Russian citizenship but declined to name them.

"Are you happy?" was another odd-ball question. Putin paused. "It's a philosophical question. I'm grateful to fate and the Russian people for their trust. It's my lifeblood. I don't know if that's enough for happiness. That's a different subject," he said.

Putin told the leaders of France and Germany Moscow is ready to allow shipping grain stuck in Ukrainian ports but demanded the West lift sanctions.
as resources allow