MAKHACHKALA — The father of two men suspected of carrying out the Boston bombings said Thursday that he would travel from Russia to the United States to bury his elder son.

Anzor Tsarnaev and former wife Zubeidat Tsarnaeva, sitting side by side in the southern Russian city of Makhachkala, denied that their sons had planted the bombs at the Boston marathon that killed three people and wounded 264, saying they had been framed.

Banging the table in front of him, Anzor said: "I am going to the United States. I want to say that I am going there to see my son, to bury the older one. I don't have any bad intentions. I don't plan to blow up anything.

"I am not angry at anyone. I want to go find out the truth," said Anzor, who took off his sunglasses only when photographers asked him to.

He said he would go as soon as possible but that he had not yet bought a plane ticket.

Zubeidat Tsarnaeva, her face pinched under her black headscarf, criticized the U.S. police for killing Tamerlan Tsarnaev, 26, four days after the bombing.

The other son Dzhokhar, 19, was wounded and captured after a manhunt. He is in a fair condition in the hospital and is charged with two crimes that carry a possible death penalty.

"I wanted to scream to the whole world, 'What did you do?' What have you done with my son? He was alive. Why did you need to kill him? Why didn't you send him to Guantanamo or whatever? Why? Why? Why did they have to kill him? They got him alive, he was in their hands," she shouted, her voice cracking.

"It is some kind of show, spectacle," she said in accented English.

She recounted how she had called Tamerlan after the bombing and he had told her not to worry.

"There is a lot that is unexplained," she said, adding that she was considering giving up her U.S. citizenship.

The Tsarnaev family lived in Makhachkala, the capital of the restive Dagestan region in Russia's volatile North Caucasus, more than a decade ago before emigrating to the United States.

Anzor and Zubeidat later returned to Russia, and their two sons remained in the United States, although Tamerlan came to Dagestan during a six-month stay in Russia last year.

The officials also said that Russia, which had tipped off the FBI about its concerns over Tamerlan in early 2011, made a second, identical request to the CIA in late September 2011.

As a result, a U.S. intelligence official said, the CIA "nominated" Tsarnaev's name for inclusion on a government watchlist known as TIDE.

That list, which is maintained by the National Counterterrorism Center, is separate — and much larger — than the U.S. government's "no fly" list.

It remains far from clear that either the alert to the FBI or Russia's contact with the CIA could have helped uncover the Boston bombings plot.

But some lawmakers this week began questioning whether U.S. security agencies had properly shared information in the case. 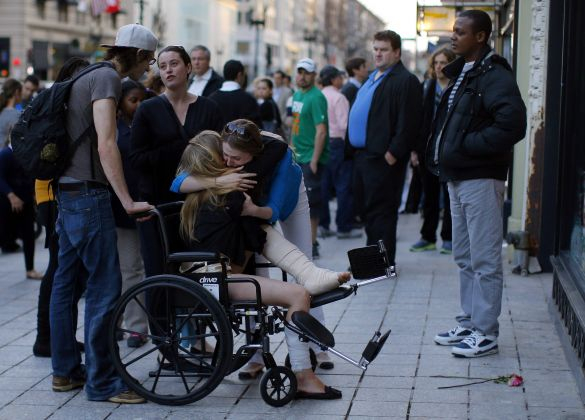 A survivor of the bombing getting a hug near the site of the first explosion. (Brian Snyder / Reuters)

U.S. officials defended their handling of the probe, noting that while the Russian government saw Tsarnaev as a threat, an FBI investigation turned up no evidence that he was contemplating violence in the United States.

The officials, speaking on condition of anonymity, described a four month-long investigation of Tamerlan Tsarnaev that lasted from March to June 2011 and was prompted by Russia's request to the FBI for information on him. Russia's Federal Security Service told the Americans that he had become a follower of radical Islam.

As part of the FBI's probe, Tamerlan Tsarnaev's name was entered into a U.S. Customs and Border Protection database known as TECS in March 2011, where it stayed for a year.

U.S. officials briefed on the investigation said that when Tamerlan Tsarnaev left the United States for a six-month sojourn in Russia in January 2012, the TECS database "pinged" and sent an alert to the Joint Terrorism Task Force, a multi-agency, FBI-led body in Boston.

Officials differed on who had received the alert, with one saying it was the FBI's lead investigator in the Tamerlan Tsarnaev matter. Another official said the alert would have gone to a Customs and Border Protection officer assigned to the task force.

At this point, the officials said, it is unclear what, if anything, the investigators pinged by TECS about Tsarnaev's departure from the United States did with that information. One of the officials said this issue was still under intense investigation inside the government.

Department of Homeland Security Secretary Janet Napolitano told Congress on Tuesday that the database notification about Tamerlan Tsarnaev expired while he was out of the United States.

A U.S. official, speaking on condition of anonymity, disputed the idea that more should have been done following the alert.

"I can't understand why that would have raised any alarm bells, someone going back to their home country. All roads lead back to that assessment — there was no derogatory information," he said, referring to the FBI review of Tamerlan Tsarnaev's activities, which included an interview with him.

Several months after asking the FBI for help investigating Tsarnaev, the Russians, apparently unsatisfied with the FBI response, contacted the CIA in late September 2011 with the same information they had given to the FBI.

Russia banned the use of the Russian translation of champagne on imported bottles, sparking outrage in France's Champagne region.
border crisis

The candidates said they will call for nationwide rallies to protest the results of last weekend’s elections.