The Russian Foreign Ministry told The Moscow Times that it was aware of the reports and looking into them.

The ministry "is studying the information that appeared in the press," a ministry spokesman said by phone.

But, he added, "No definite statement will be issued until all of the information has been verified."

The suspects have been identified in media reports as Djohar and Tamerlan Tsarnaev, brothers whose family fled Chechnya during the first Chechen war in 1994-96. The family apparently lived in Central Asia before returning to Russia — this time settling in Dagestan, near Chechnya — and then moving to the U.S.

U.S. authorities killed one suspect and were searching for a second after a terse standoff complete with shooting and explosions occurred in a suburb of Boston on Friday. NBC News said that the dead suspect was Tamerlan Tsarnaev.

The father of the suspects told The Associated Press by phone from the Dagestani capital, Makhachkala, that Djohar Tsarnaev was a smart and accomplished student.

"My son is a true angel," Anzor Tsarnaev said. "Djohar is a second-year medical student in the U.S. He is such an intelligent boy. We expected him to come on holidays here.”

A Moscow Times online search turned up a man named Djohar Tsarnaev on Vkontakte, the Russian version of Facebook. It was not immediately clear whether he was the same man sought by U.S. authorities. 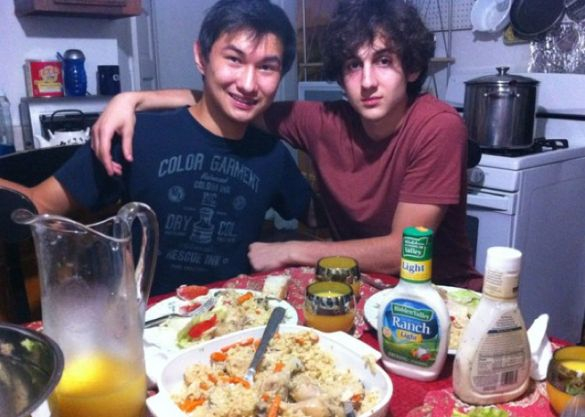 Djohar Tsarnaev with an unidentified person in a photo on his Vkontakte page.

Tsarnaev's page said he attended a school in Makhachkala from 1999 to 2001.

A spokesman for Gymnasium No. 1 told The Moscow Times by phone that school records showed that two Tsarnaev brothers along with two sisters arrived in Dagestan from Kyrgyzstan in 2001. But he said the four children studied for only a year and then left for the U.S. 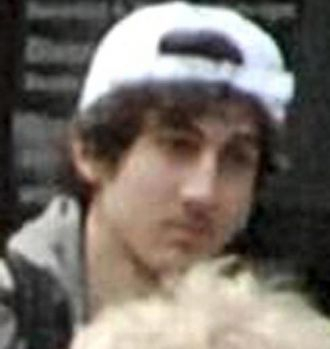 An FBI image of one of the Boston bombing suspects.

Tsarnaev's page also said he  graduated from "Cambridge Ringe & Latin School" in Boston on 2011. There is a public high school named the Cambridge Rindge and Latin School in Cambridge, Massachusetts.

Tsarnaev was apparently a star wrestler at the high school in Cambridge, being named on a local news website as a 2011 “Greater Boston League Winter All-Star” in the sport. Wrestling is an extremely popular sport in the North Caucasus, with numerous Olympic champions and medalists hailing from the region.

His brother, Tamerlan, was apparently also an athlete, participating in national amateur boxing events in the U.S., according to the captions of a photo essay about him at a boxing gym on the website of photographer Johannes Hirn. The captions say Tamerlan's family fled to Kazakhstan in the early 1990s because of the chaos of the first Chechen war, then eventually moved to the U.S. as refugees.

It was not immediately possible to reconcile the conflicting reports on whether the family had lived in Kyrgyzstan or Kazakhstan, both Central Asian countries and former Soviet republics. But unidentified Kyrgyz law enforcement officials told the Kyrgyz news agency 24.kg that the Tsarnaev brothers emigrated from Kyrgyzstan to Dagestan, apparently in 2001, and then later moved to the U.S.

Talking about his Muslim faith, Tamerlan is quoted as saying, “I am very religious” and “there are no values anymore.” He says his girlfriend, who he is apparently pictured with him, converted to Islam.

A man named Tamerlan Tsarnaev was arrested for assaulting his girlfriend in July 2009, according to an online Cambridge police report.

A YouTube account associated with a Tamerlan Tsarnaev includes on its playlists a music video by Timur Mutsuraev titled "Let's Devote Our Lives to Jihad" and a lecture by Feiz Mohammad, an Australian Muslim preacher of Lebanese descent known for his fundamentalist Wahhabi beliefs. 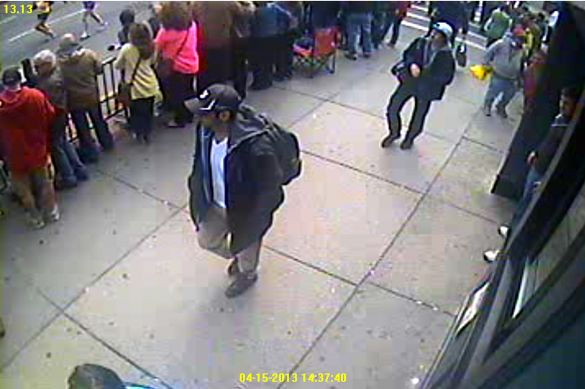 An FBI image of the two suspects in the Boston bombings.

Djohar Tsarnaev says on his Vkontakte page that his world view is "Islam" and his personal priority is "career and money."

He belongs to two Chechnya-related groups on the social networking site and last logged in to the site via a cell phone at 5:04 a.m. Friday Moscow time. That would be 9:04 p.m. Thursday Boston time.

RT state television was showing live footage of the U.S. police operation in a Boston suburb on Friday afternoon.

Chechen leader Ramzan Kadyrov, who in the past has distanced Chechnya from Chechens linked to terrorist cells, underlined that the Chechen people cannot be blamed for the tragedy in Boston. "The roots of this evil should looked for in the U.S." he wrote on his Instagram account, pointing out that the Tsarnaev brothers had lived in the U.S. for many years and "their worldview was formed there."


Chechnya, Dagestan and the other North Caucasus republics have been a breeding ground for terror since the first Chechen war, and militants from the region have staged multiple attacks in Russia.

President Vladimir Putin did not immediately comment on the latest developments. But he offered to help the U.S. investigate the Boston bombings shortly after they occurred, and on Thursday he called the attacks "disgusting."

The governor of Luhansk region said the strategic city Lysychansk was "on fire."
deadly strike

A pungent, wax-like substance, white phosphorus burns to the bone if it comes into contact with human skin.