Sobyanin visited the Mayakovskaya metro station and purchased a new pay-as-you-go electronic pass that can be used for trips on the metro as well as on buses and trams, Interfax reported.

Maxim Liksutov, the city's deputy mayor for transportation, told Sobyanin that 4,000 such cards had been sold Tuesday morning.

Each journey on the metro, bus or tram with the new card will cost 28 rubles ($0.90), to be deducted from the passenger's balance on the card. 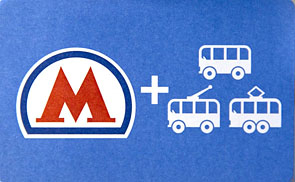 For MT
For the metro, buses and trams.

Starting July 1, additional customized tariffs will be introduced, and on Sept. 1 commuters will be able to use the electronic pass to pay for trips on commuter trains, the Aeroexpress train service to Moscow airports and for street parking, Liksutov said.

He noted that initially, users would be able to top up their passes in the metro or at designated kiosks throughout Moscow, but "starting Sept. 1, there will be about 25,000 top-up points — cash machines and payment terminals."

Sobyanin said that since the introduction of the unified passes, passenger traffic in Moscow climbed for the first time in many years. The number of passengers using ground transportation increased 2.4 percent, he said.

The introduction of new fare options for unified passes will make public transportation even more popular among Muscovites, Liksutov said.

A tourist pass, also available now at the price of 200 rubles, allows passengers to make unlimited trips on all means of public transportation for one full day.

Putin and Shoigu's outings into the Siberian wilderness have become a regular fixture.