Douglas Smith is an historian and translator, author of seven books on Russia. In the 1980s, he was a Russian-speaking guide on the U.S. State Department’s exhibition “Information USA” that traveled around the Soviet Union and served as an interpreter for late President Reagan.

In 2016 he found an extraordinary cache of color photographs and films taken by Major Martin J. Manhoff, a military attaché at the U.S. embassy in Moscow in the 1950s. The Moscow Times asked him to tell us about the discovery, the archive, and its importance for understanding the Soviet Union then — and perhaps for understanding Russia today.

From a quick look to discovery

In Seattle a couple had passed away without any children. They had a very close friend — the executor of the estate. After they died, they’d left a house full of art and Russian things that they had collected.

The executor of the estate didn't speak Russian. She didn't know what to do with it all. She had a friend of a friend who I had worked within the Soviet Union back in the 1980s for the state department. And this friend of mine said, "There's a house with some Russian stuff. I don't really know what all is there. Would you be interested in going over with me and we'll take a look around?"

I went with her once and didn't see anything. I went back a second time. There were a lot of posters and Soviet books and some tchotchkes. I was literally thinking there was nothing of interest. I said, "Well, before I go, there's one other room." There were lots of boxes, and I was thinking it's just more the same, but as a historian, I like to think I am, if nothing else, thorough. You got to turn over every stone. And I did. I took a lid off this box and see boxes of slides and I'll never forget — I open a box and see glass slides, not plastic.

The first thing that struck me was, “These are old, but they're in color.” And then I look more closely. "Wait a minute. That's Cyrillic. Why is that in Cyrillic?" And then I very quickly realized, "Oh, my God. These are from the Soviet Union when he was there and they're in color and there's thousands of them."

And then I start pulling out another box with canisters of film, and I pick up one that says, "Top Secret." And then in pencil, it's written, "Stalin's funeral."

At that point I was shaking. But I didn't have a 16-millimeter movie projector to see what was on the films. I found a place in Seattle that would digitize everything for me, but it took them two months. I was on pins and needles waiting to get them back. They digitized everything beautifully. When I was able to look at it all, I saw it was amazing material.

First of all, the photographs are in brilliant color, and we just don't have much color photography from Stalin's Russia. And then, second, it was done non-officially for no propaganda purpose. It was literally just an American embassy employee, a military attaché, going around and taking photographs all around Moscow and other parts of the Soviet Union. And for them to disappear for over 50 years — closer to 60 years before I just miraculously stumbled upon them — you can't make this up. It's a really, really remarkable find. 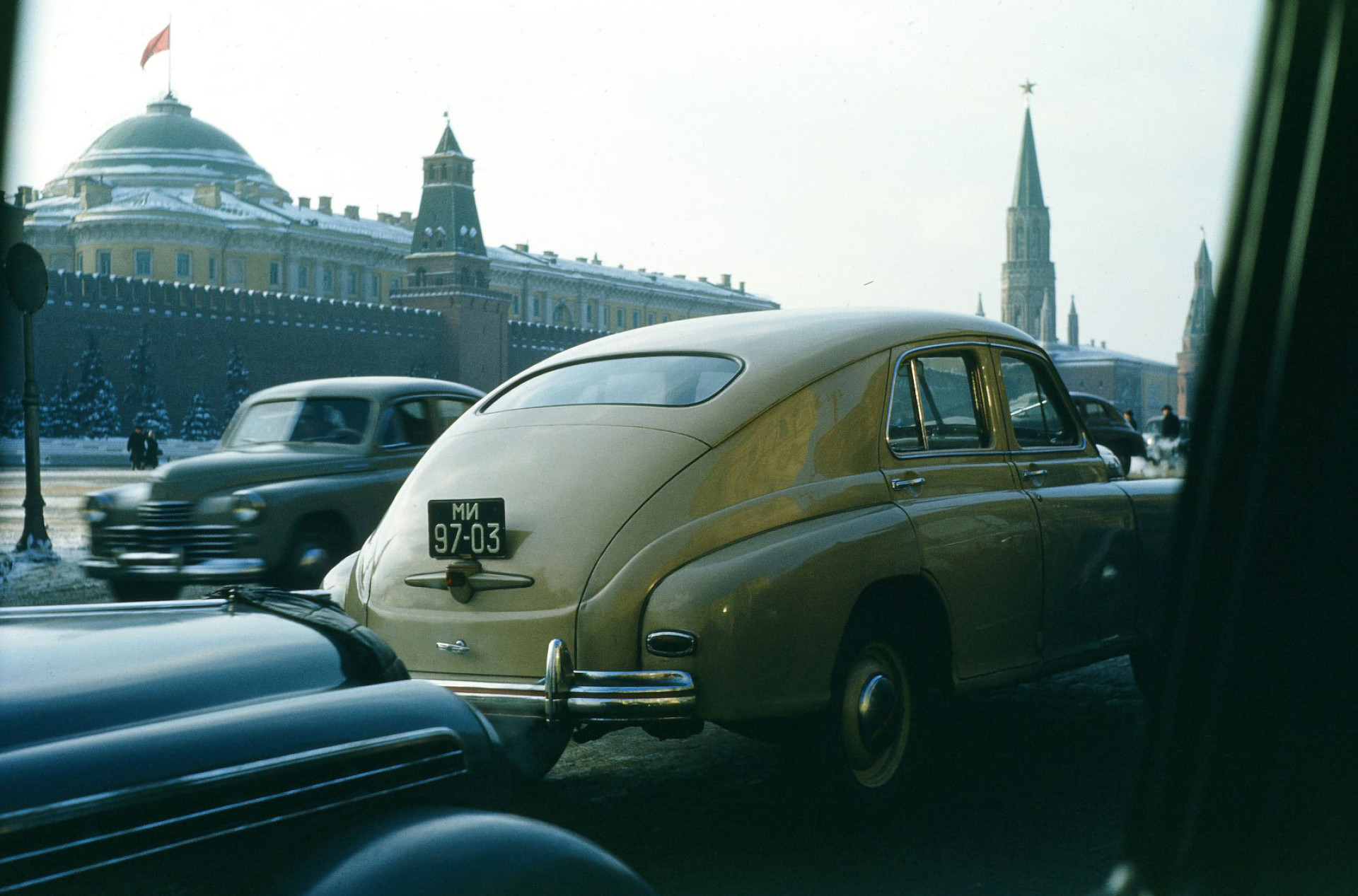 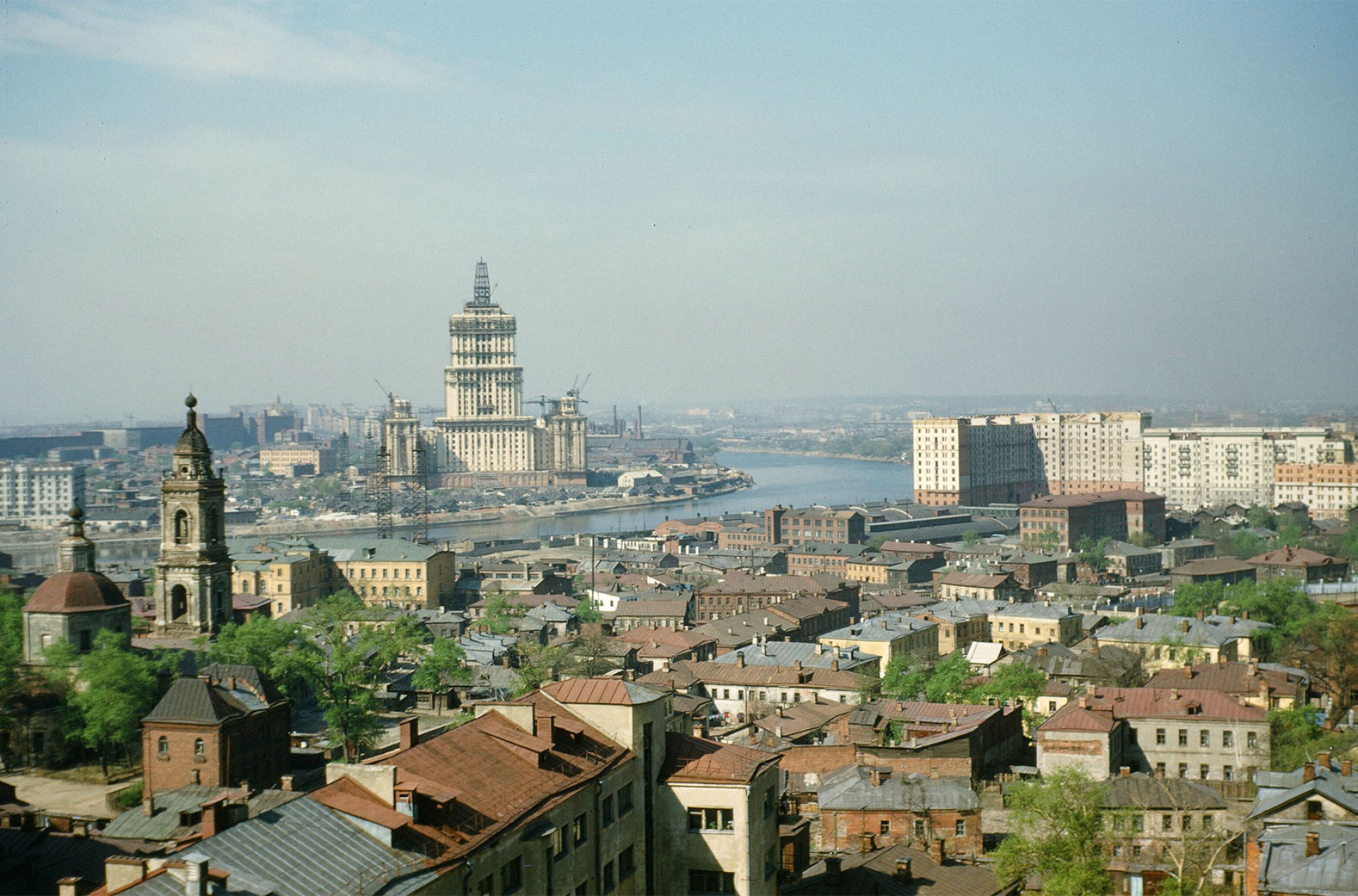 Construction of the Hotel Ukraina from the top of the new embassy. May 1953 Manhoff Archives 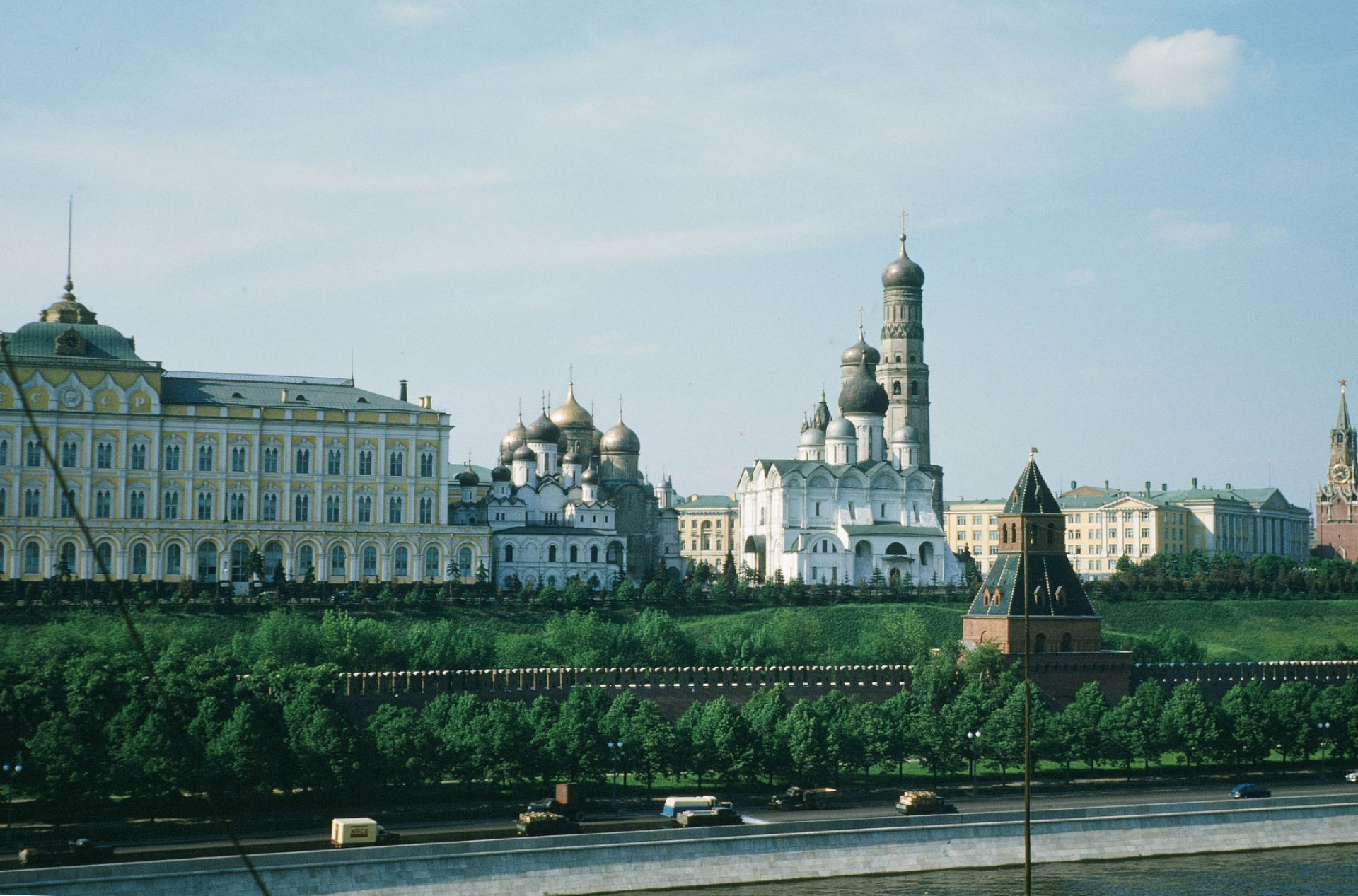 View of the Kremlin from the roof of the British embassy (L to R: Grand Kremlin Palace, Cathedral of the Annunciation, The Archangel Michael Cathedral, and the Spasskaya Tower). 1952 Manhoff Archives 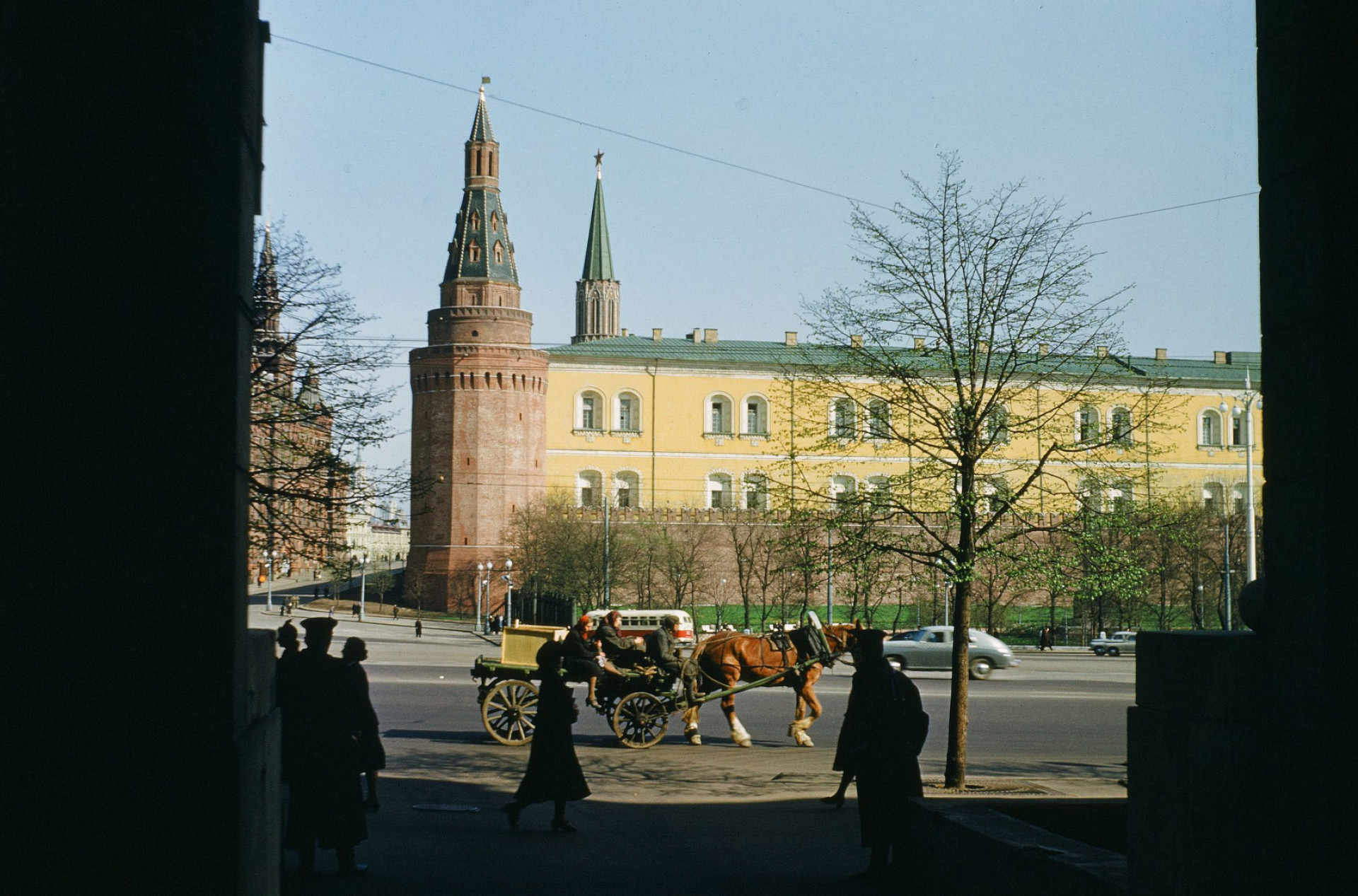 A view through the arch of the US embassy across Manege Square. May 1953 Manhoff Archives 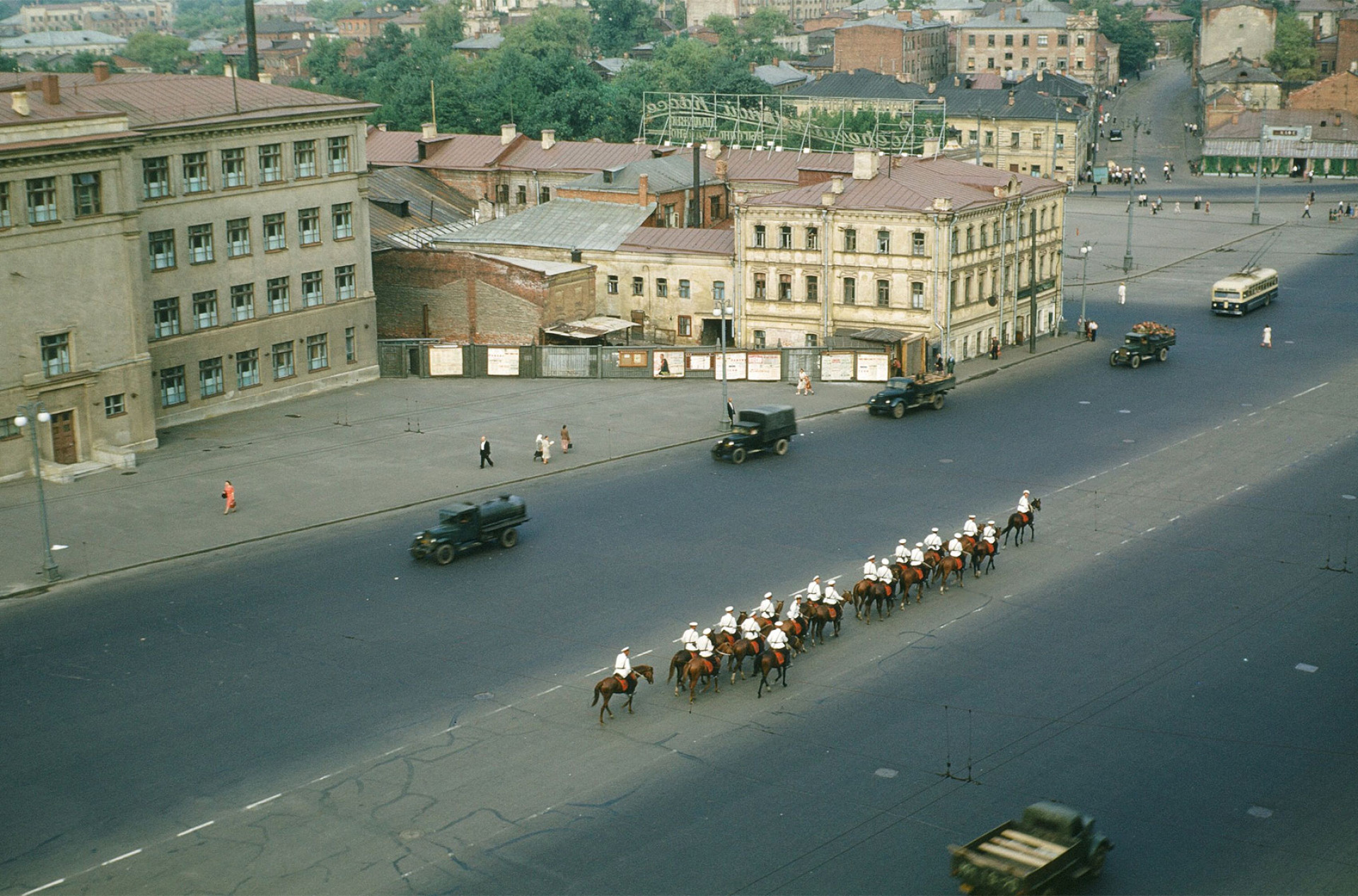 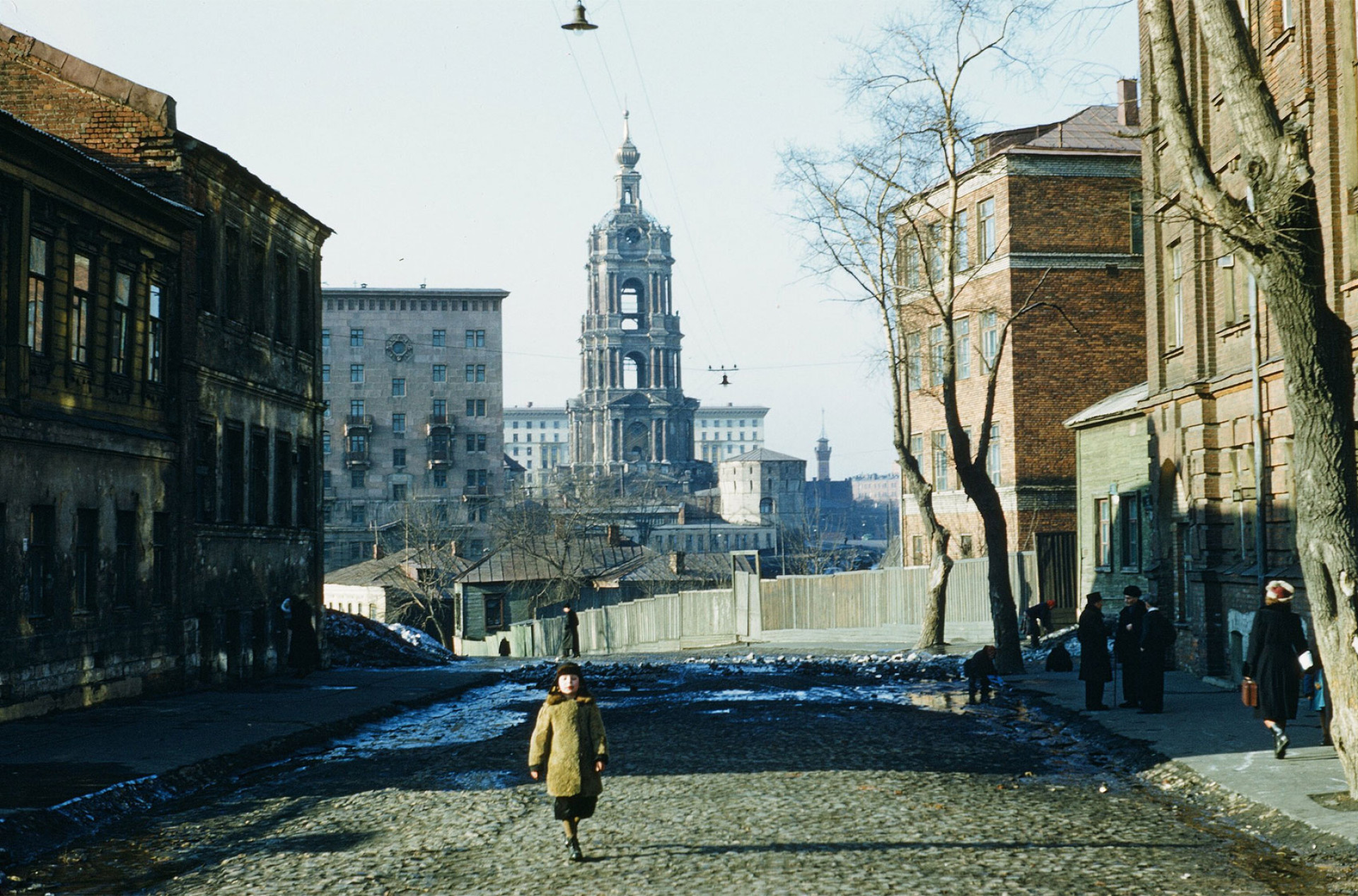 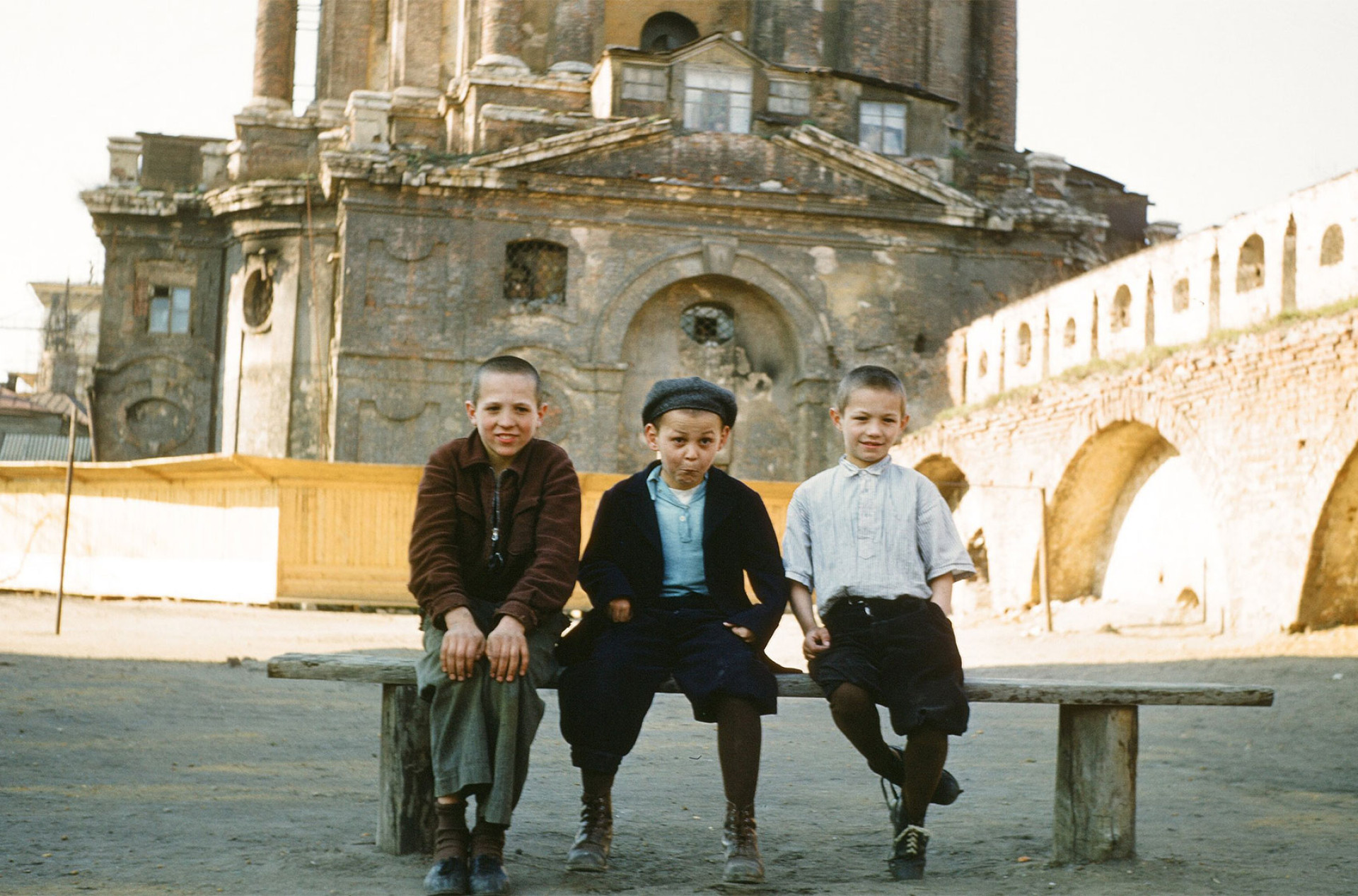 Three boys on a bench, Novospassky Monastery. May 1953 Manhoff Archives 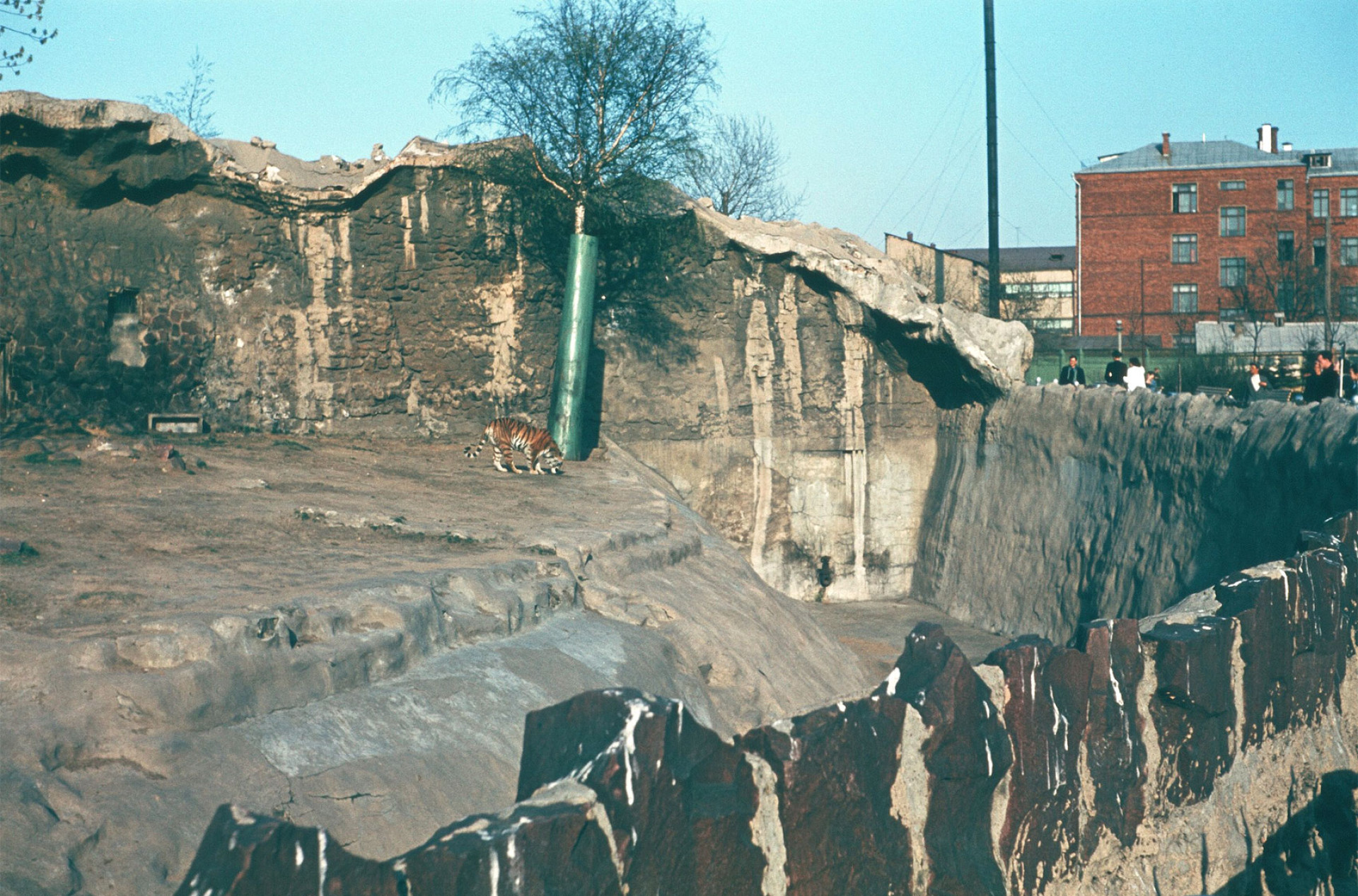 The tiger pen at the Moscow zoo Manhoff Archives 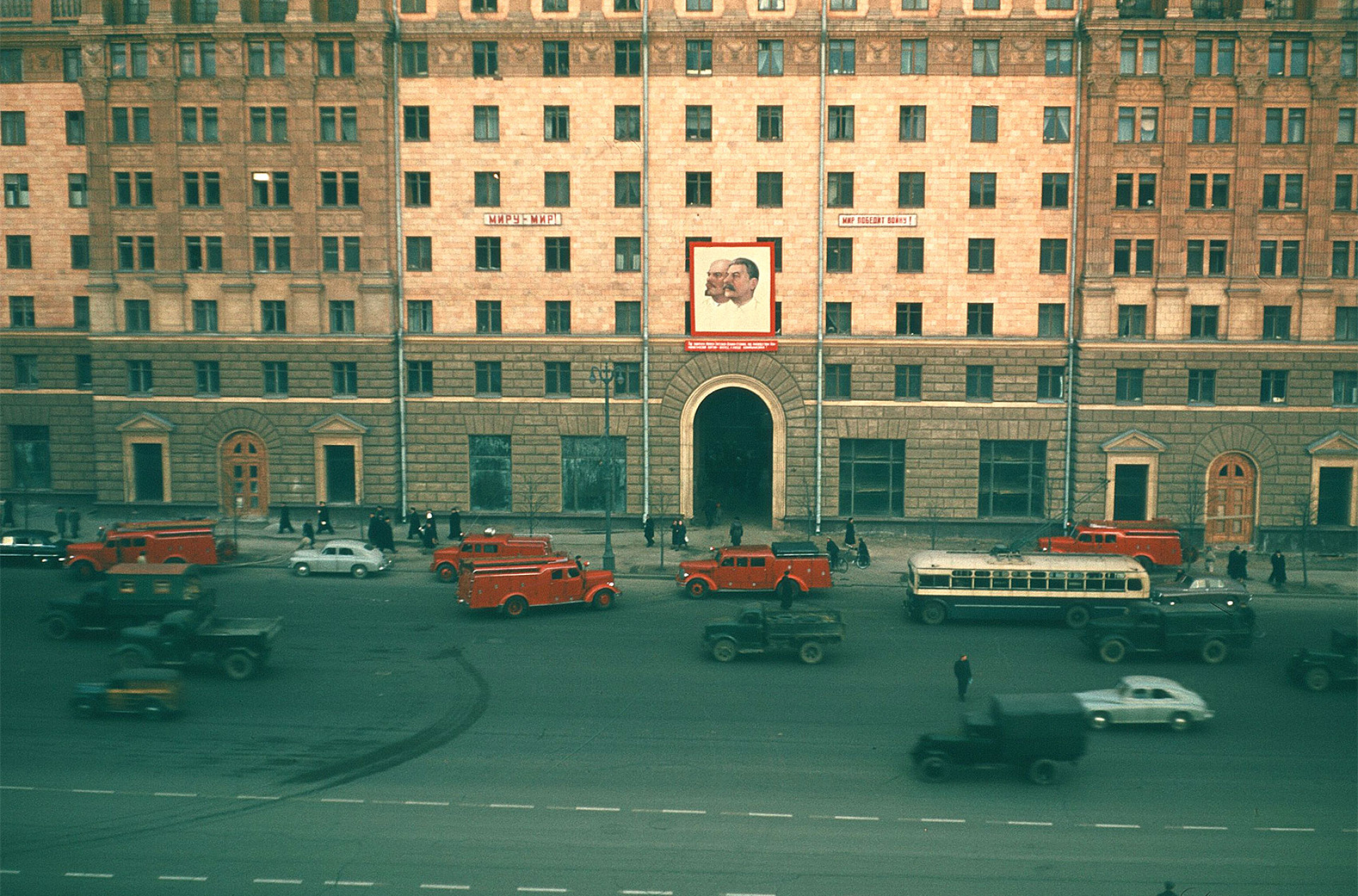 View from the new embassy. The signs read--Peace to the Word and Peace will defeat War. October 1953 Manhoff Archives 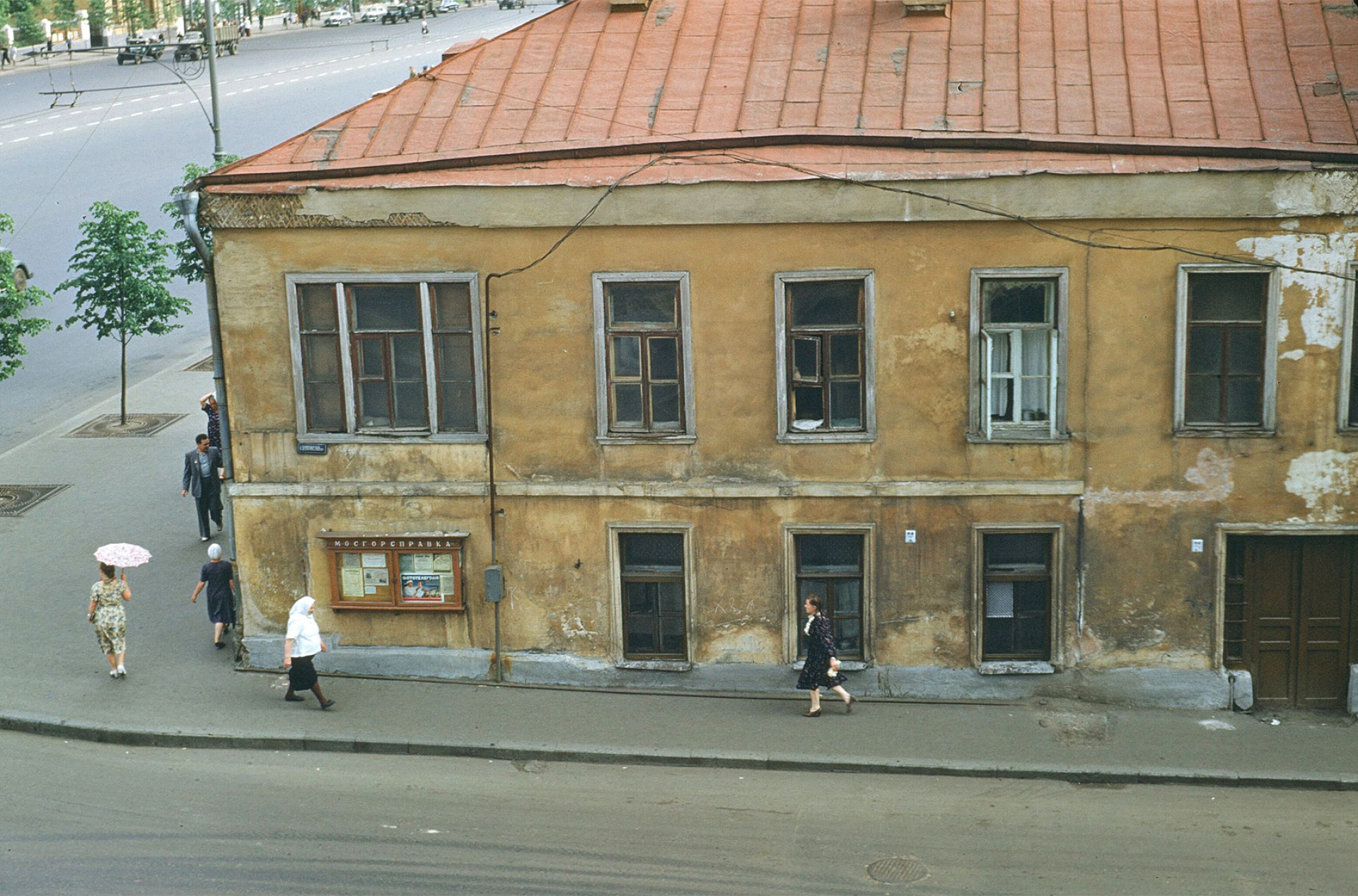 The corner of Bolshoi Deviatinsky Lane as seen from the new US embassy. May 1953 Manhoff Archives 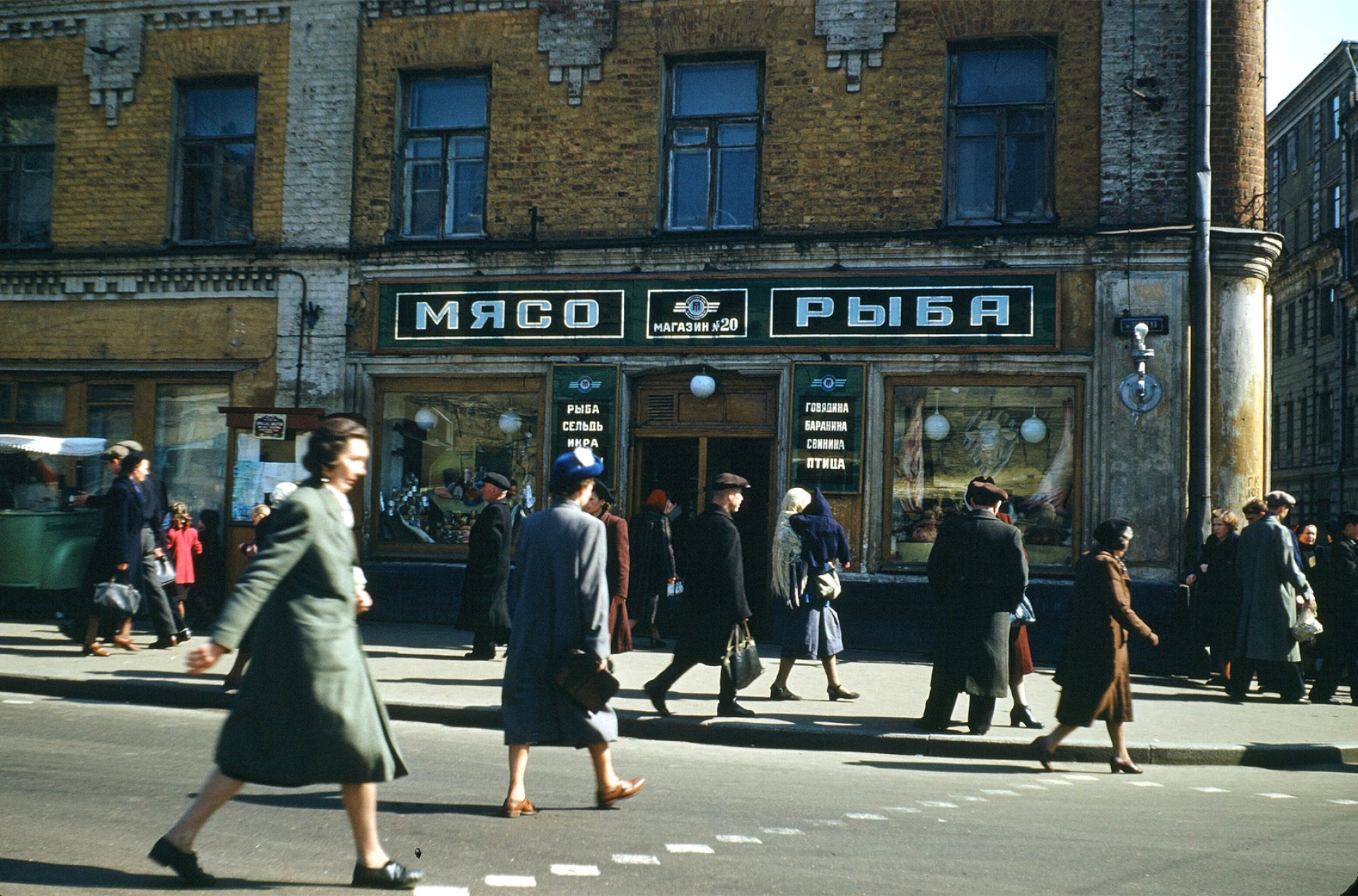 "Meat and Fish Store No. 20" on Herzen Street Manhoff Archives 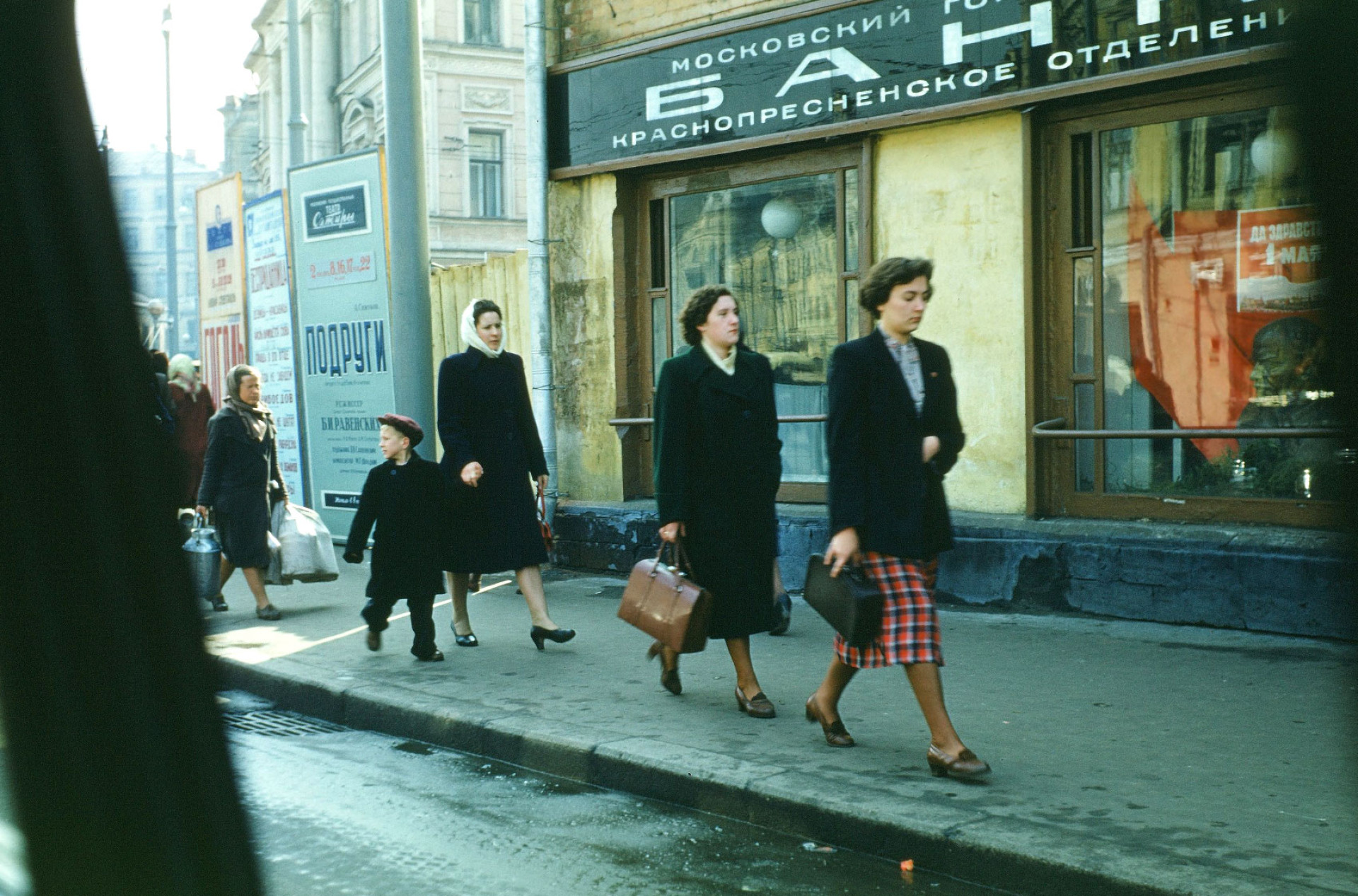 Martin Manhoff and his hobby

Major Martin J. Manhoff was an attaché at the Embassy. It was his job to notice things and record things, and try to suss out what life was like in Soviet Union at the time. He had studied art history at the University of Washington. He was born in Seattle in 1917 into a Jewish family. His family owned a picture-framing store, and he got a camera as a young boy. He was always taking pictures. He got a movie camera before coming over to the Soviet Union and was taking 16-millimeter films around the United States. So, he was a lover of photography, a lover of film. His wife, Jan was an art major, and she was an artist. They were rather artistic people.

Did he take the photographs for official purposes? I think much of the drive that led him to take all these photographs was for his personal enjoyment. There was, however, at least one canister of 16-millimeter film that had "top secret" written on it — the film he took of Stalin's funeral.

Making the Soviet past available to everyone

The executor of the estate gave me the legal control over these, since Martin and his wife had no children and they didn't make any stipulations for them in a will. My intent from the very beginning was to digitize the collection, preserve it, and then to donate it to the University of Washington library.

Both Martin and Jan went to university there, they're from the area, and so the entire collection is now there at the University of Washington and is safely preserved. Anyone can use it.

First, though, I had to find people — mostly online — who could look at Martin's photographs and say, "Oh, that's Taganka." "Oh, that's Prospekt Mira heading north." I crowdsourced some of this to help me figure out, as much as possible, exactly where each of these photographs was taken.

I had everything digitalized, and I worked with a web design firm here in Seattle to make a website. I did a good deal of research to write the narrative. And then I put up about 300 of the best photographs. And I put up all of the movie footage. I think it's over two hours of film. 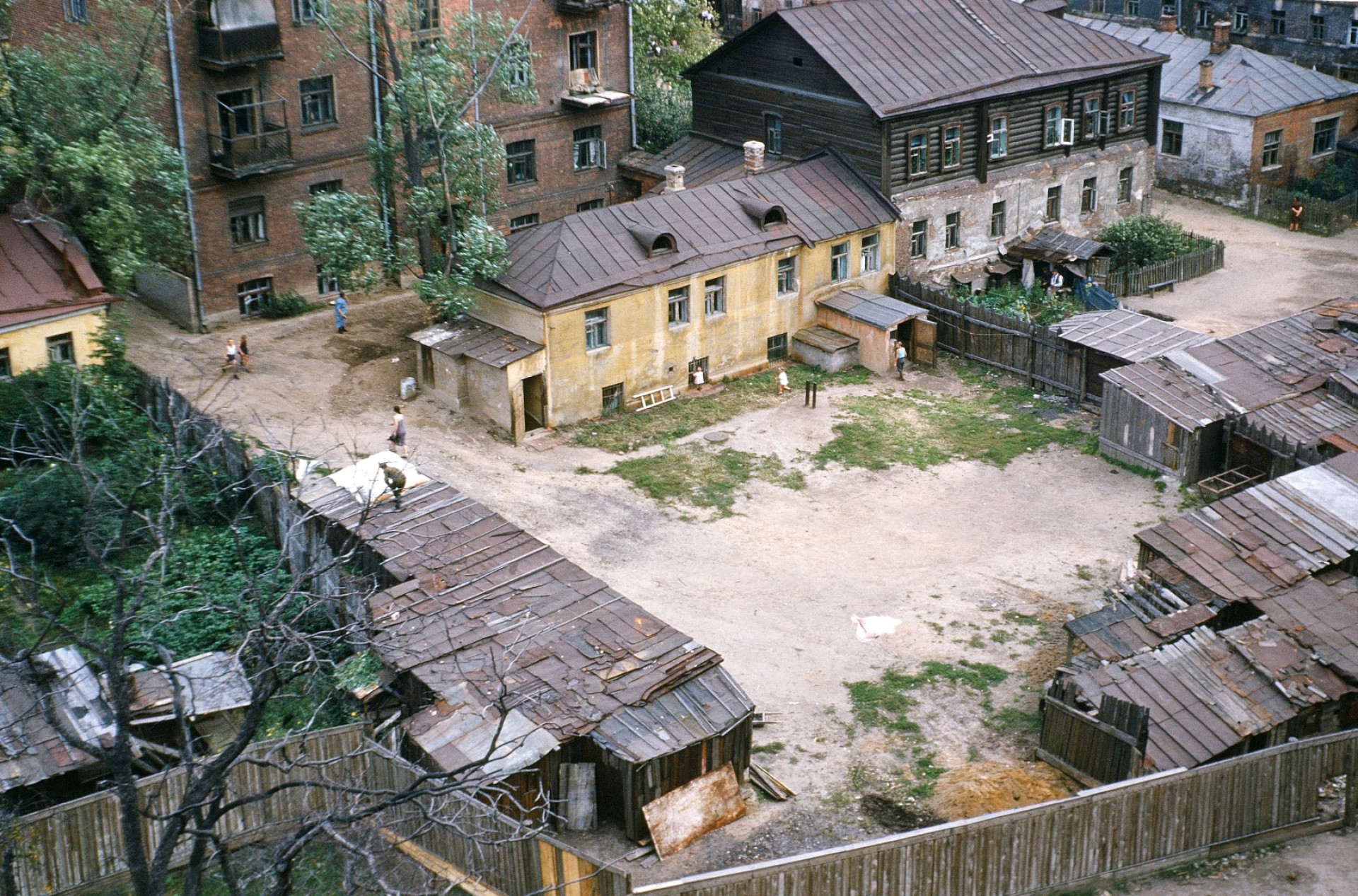 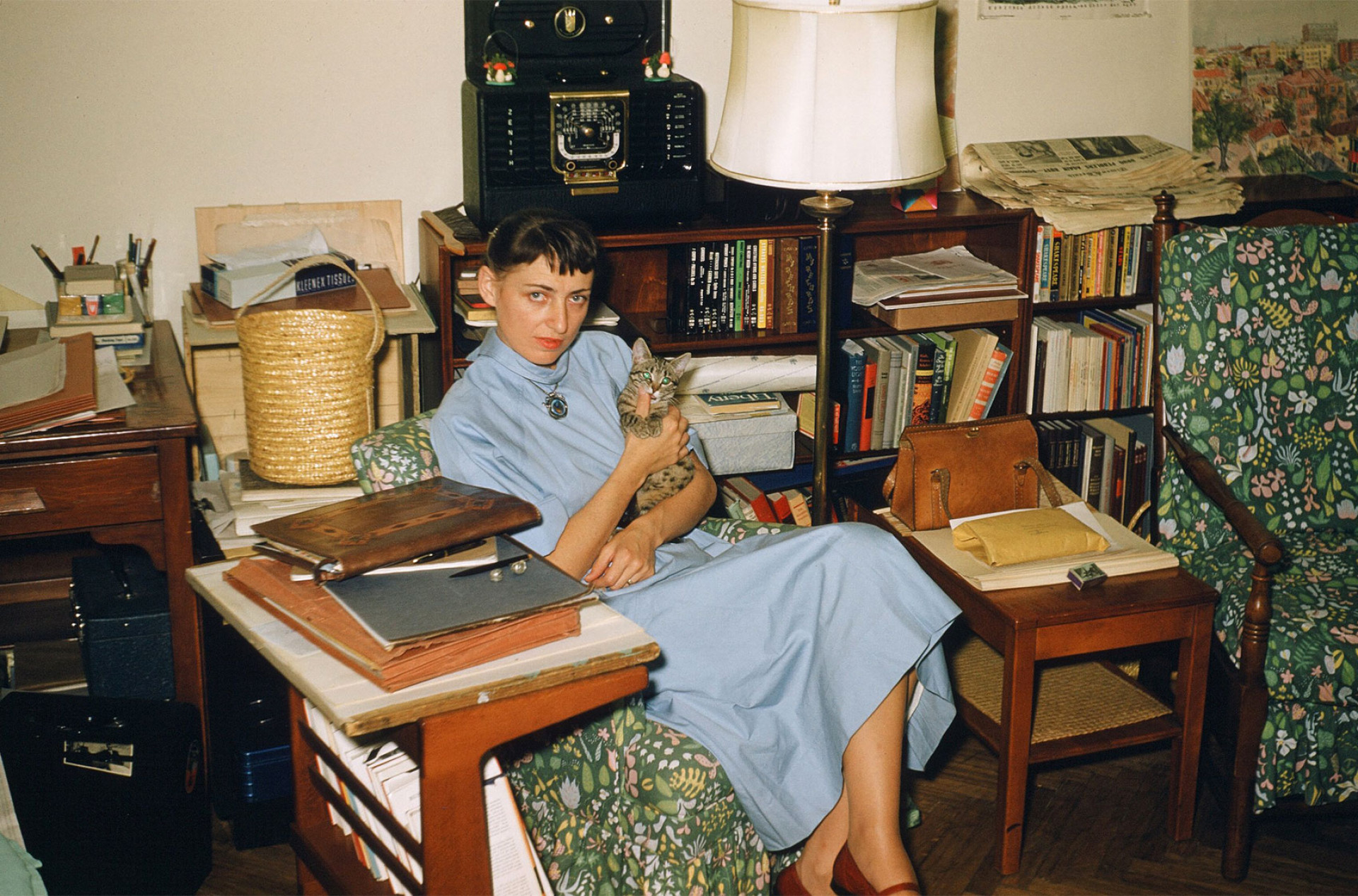 Jan and Malenkaya at home on Narodnaya. Manhoff Archives 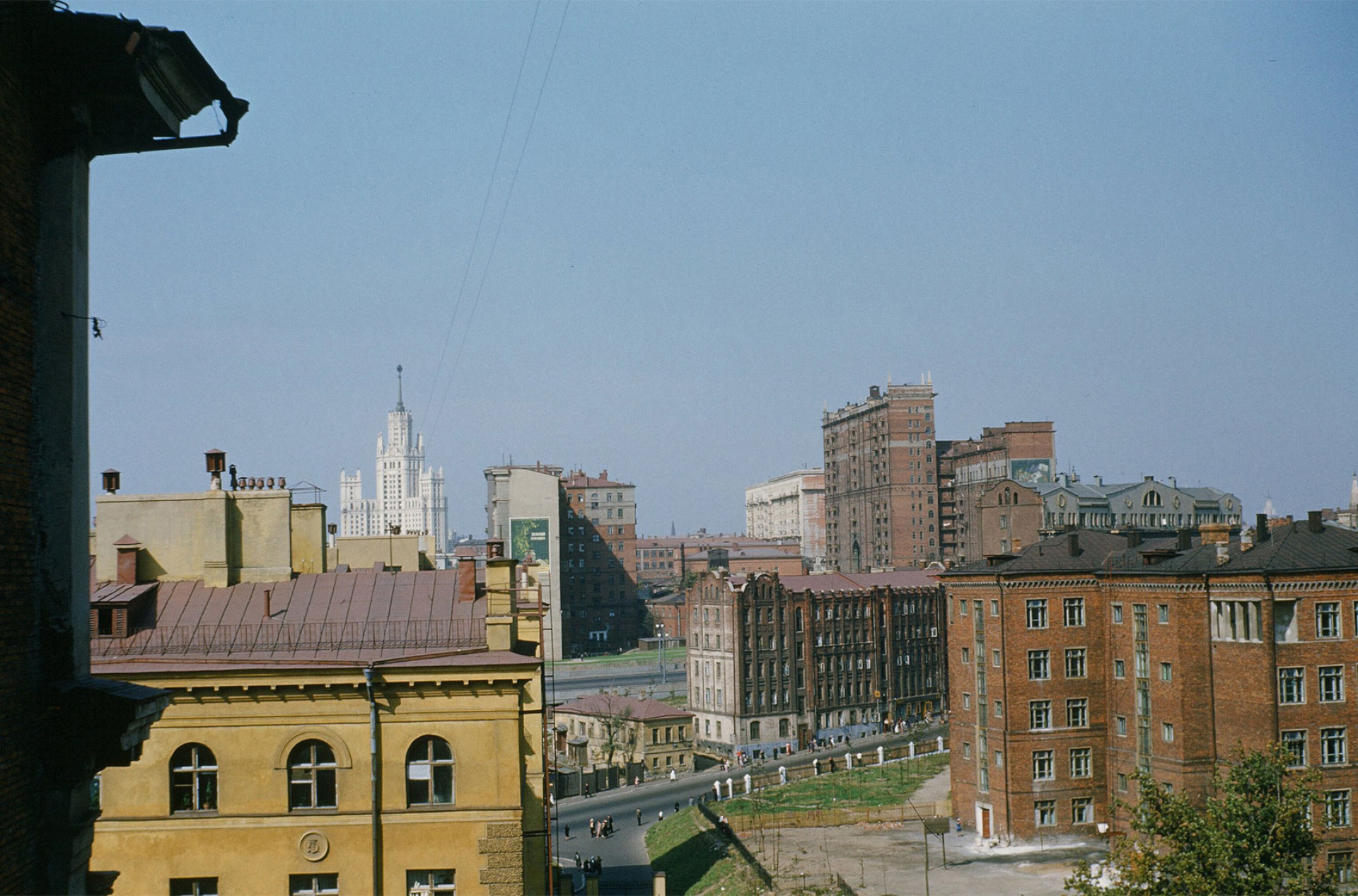 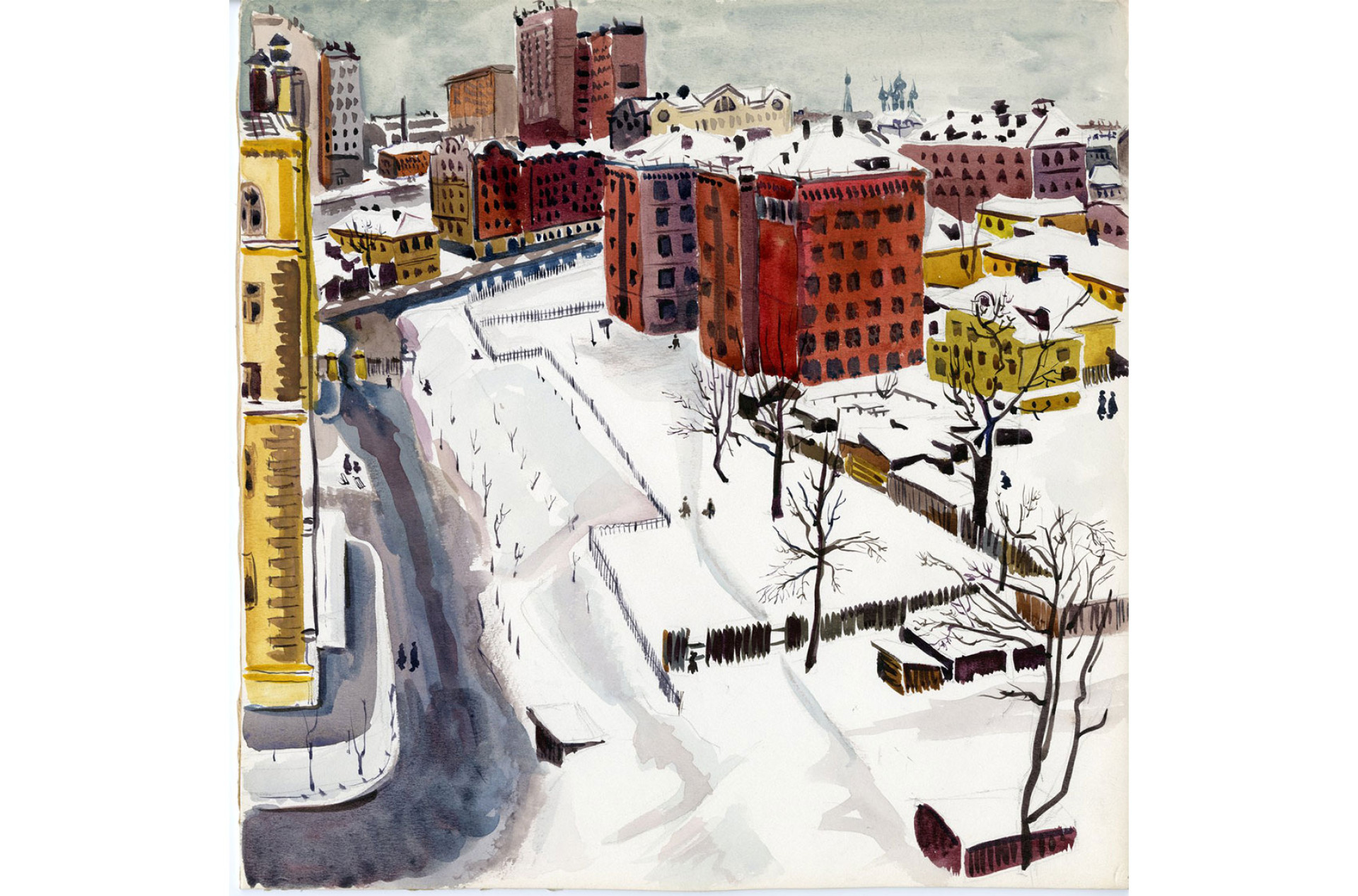 Jan's painting of the view from the apartment on Narodnaya Street. December 1952. Manhoff Archives 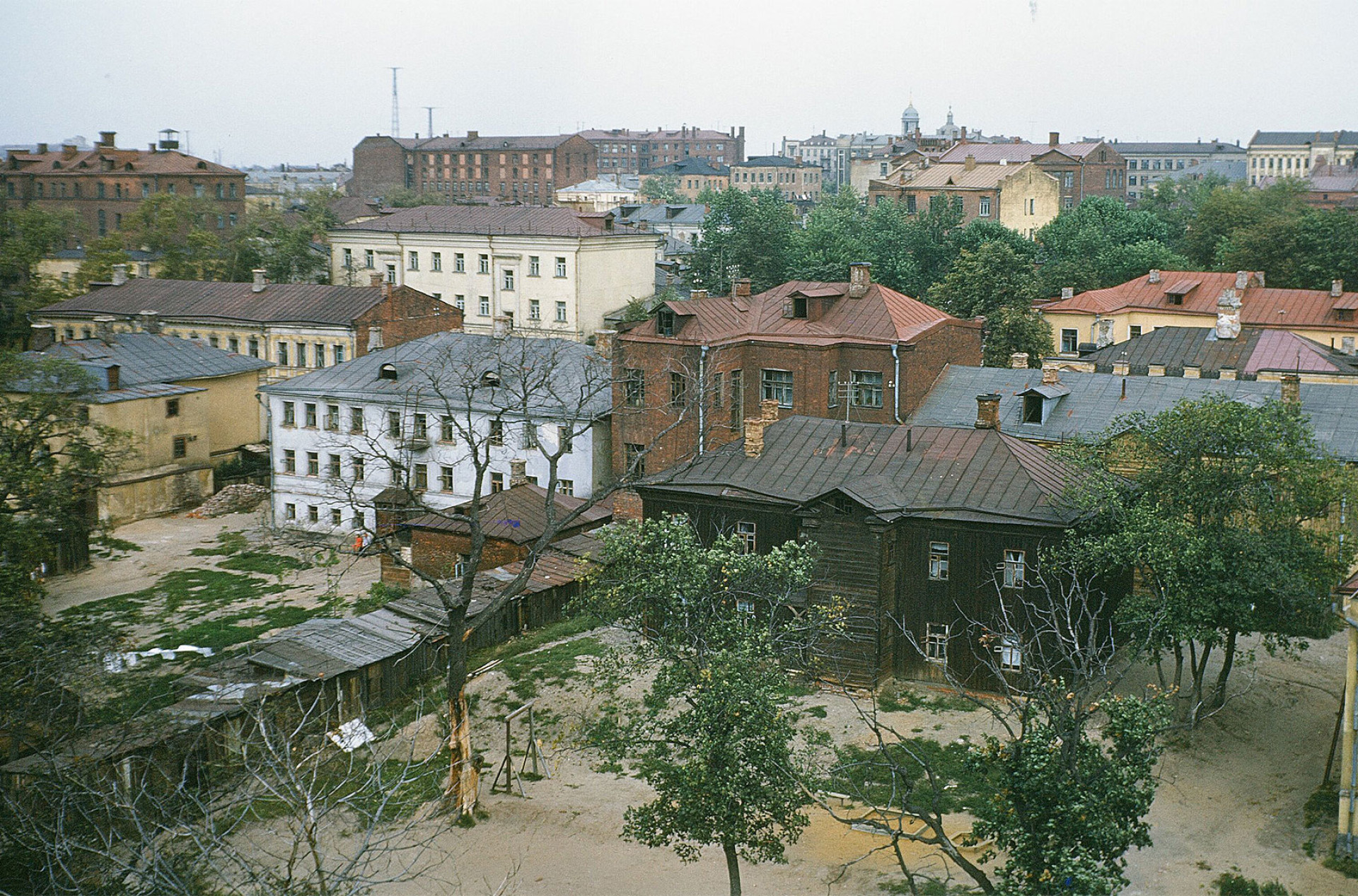 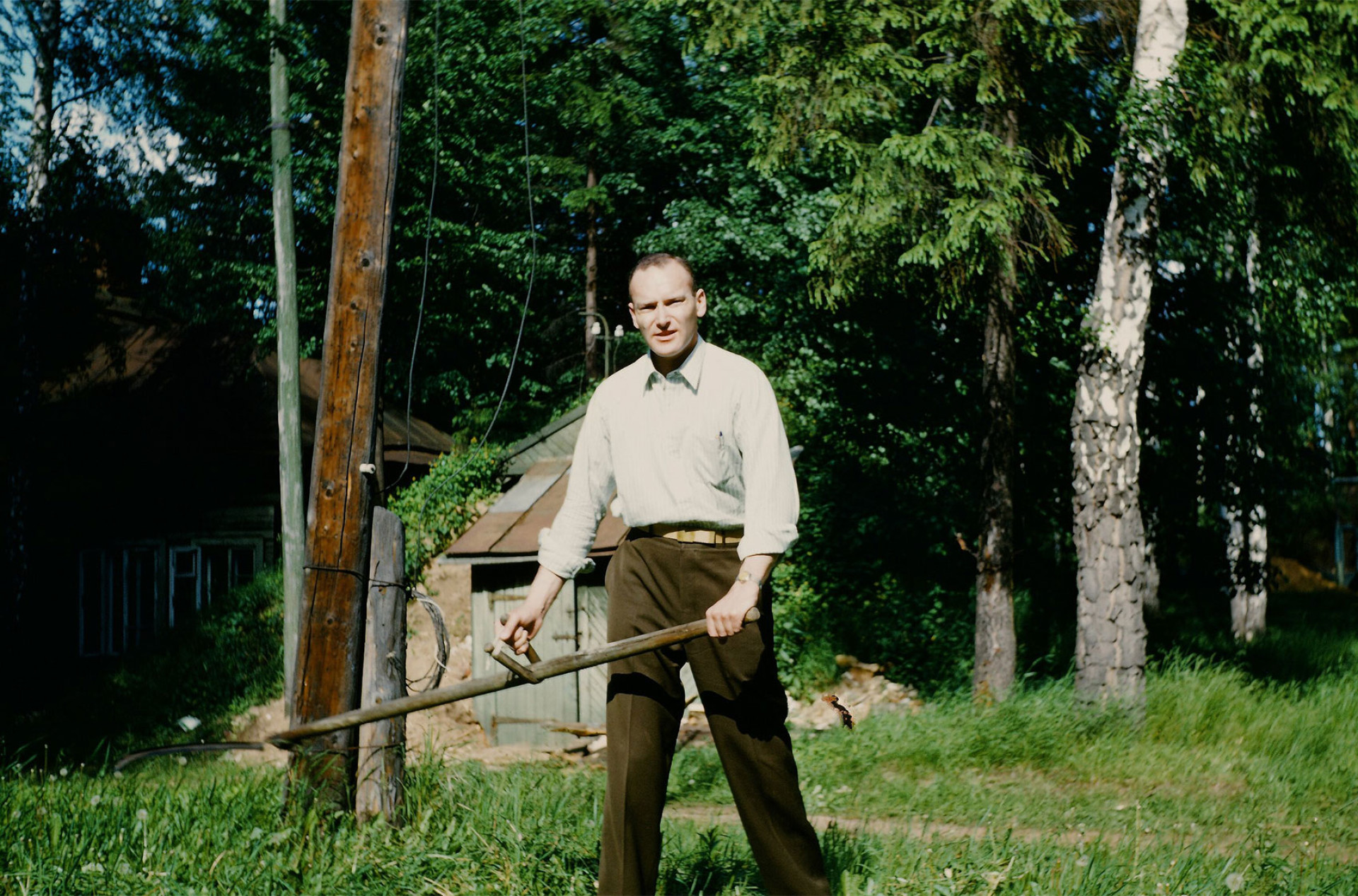 Manhoff with scythe at the US embassy dacha at Tarasovka. June 1952. Manhoff Archives 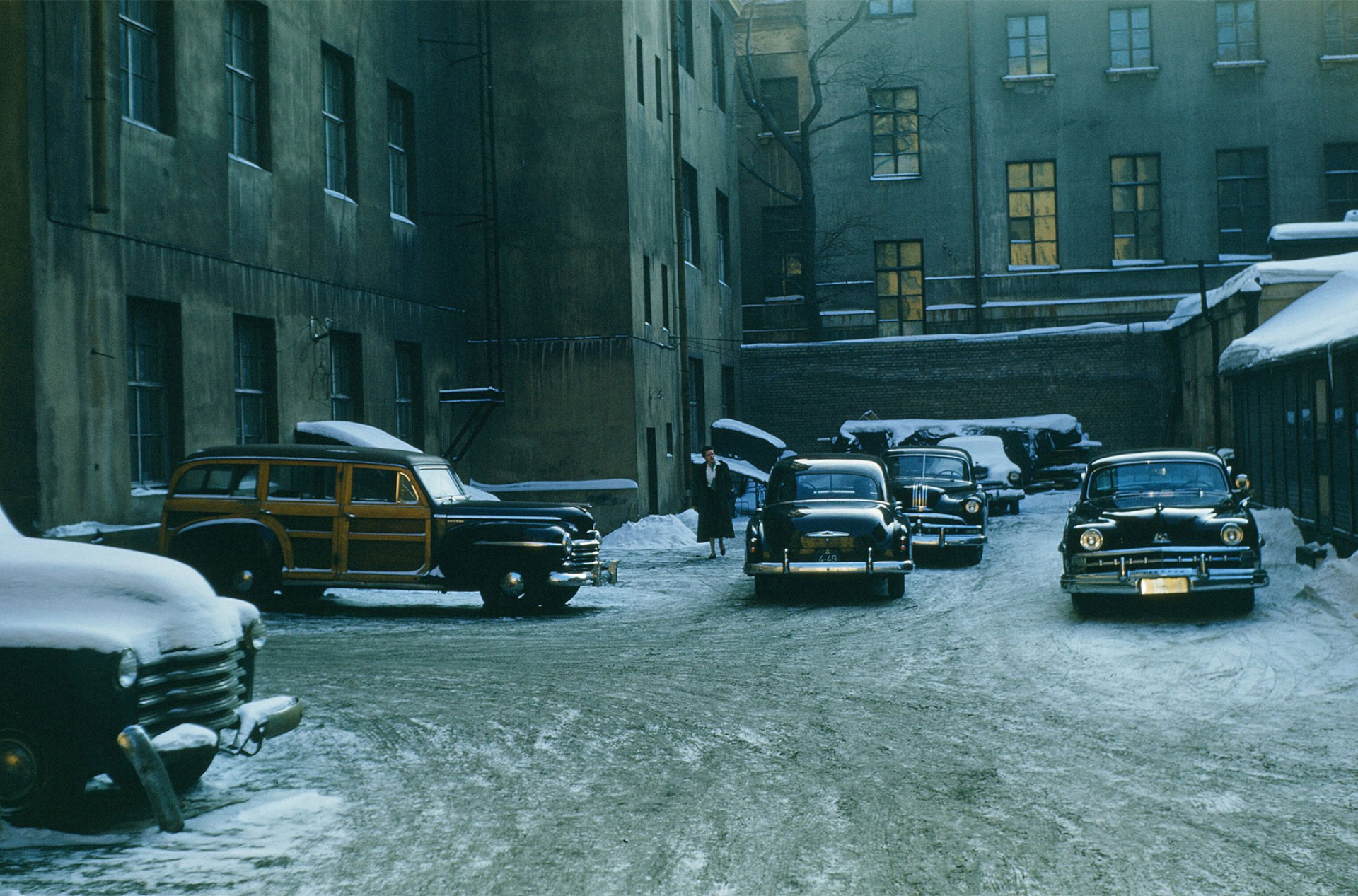 I encourage people to go to the website and check it out. It's visually stunning, and it often just leaves you also with a lot of questions: What he was thinking when he took this picture? Where exactly were they when they filmed this from the train? It takes you back to this time and place.

There are so many little details in each of the photographs that you can pick out — the clothing, the way the streets look, the automobiles or buses or trucks and all that. That’s really my only goal, and to know that the collection is preserved now. Somebody may come along later and could write a book on it. I feel really good about that.

I showed it to friends of mine who are not, in any way, connected to Russia or Russian historians. And it's intriguing for them, because they think, "Stalinism. Didn't everyone walk around frowning and fearful that they were going to be put in the Gulag and all that?" It's interesting — if you were to go back to Hitler's Germany, people were still laughing in the streets. That weird mix of police state, authoritarianism, totalitarianism, and you’d still see that daily life goes on. You see people smiling and you see little children queuing for ice cream and you see women walking arm-in-arm with smiles on their faces. It complicates what, for some of us, would be an overly simplistic idea of what it means to live in a police state.

You can read more about the Manhoffs and the collection and see all the photographs and films on the site here.