Russian President Vladimir Putin held his annual end-of-year press conference in Moscow on Thursday as soaring tensions with the West over Ukraine have sparked fears of an all-out war.

Due to Covid-19 restrictions, media outlets were not able to apply for accreditation to the event for the first time since it was first held in 2001. Instead, the Kremlin hand-picked around 500 international and domestic journalists to participate. A number of critical independent outlets, including Novaya Gazeta — whose chief editor shared the Nobel Peace Prize this year — said they received no invite.

In addition to the Ukraine crisis, journalists questioned Putin on topics ranging from Russia's crackdown on civil society and the coronavirus pandemic’s effect on the economy to his relationship with Russian Santa Claus in the nearly four-hour event.

Here are the key topics he addressed:

On tensions with the West over Ukraine

Several questions were dedicated to the situation with Ukraine, with Putin railing against Kiev and its Western allies for causing the recent surge in tensions and demanding that the West give Russia security guarantees “right now.”

But he expressed optimism toward talks with Washington on Moscow’s series of proposed security guarantees that seek to shut NATO out of much of the post-Soviet world.

He called the current negotiations with the U.S. “positive” and hinted at fresh direct talks in Geneva in the new year, saying: “The ball is in their court.”

The West accuses Russia of plotting to invade Ukraine, which has been battling pro-Moscow separatists in its eastern Donbass region since 2014. 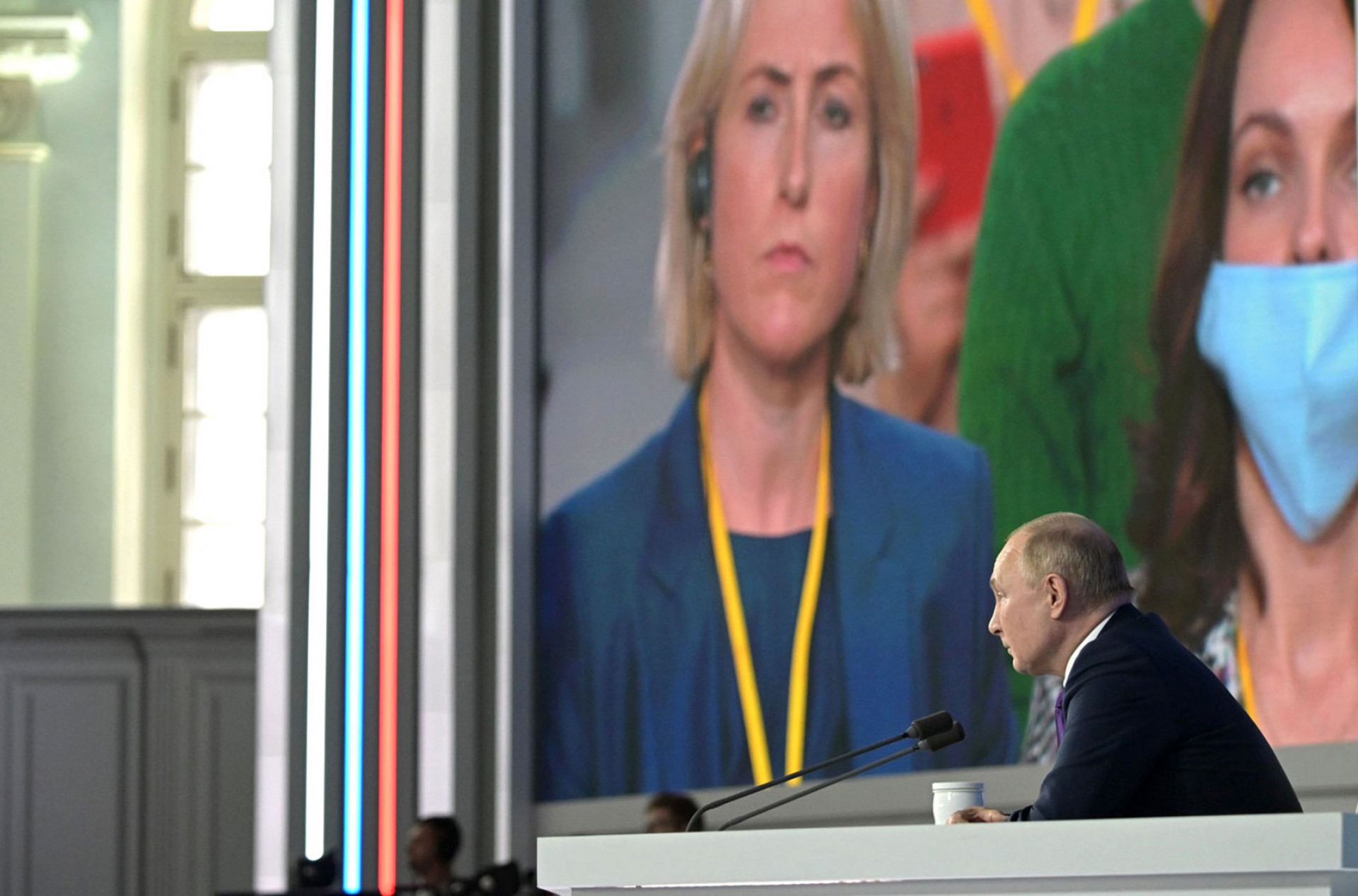 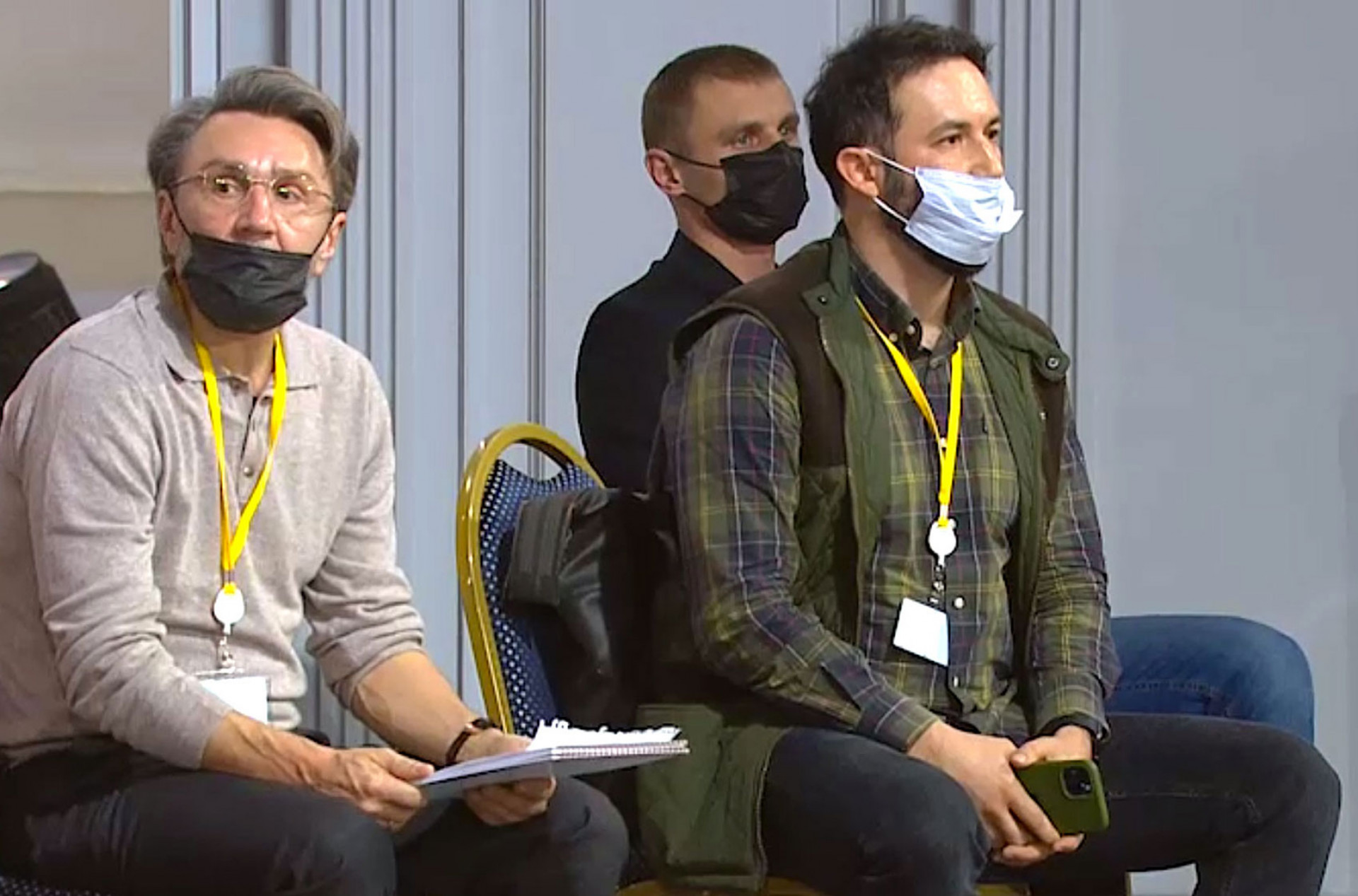 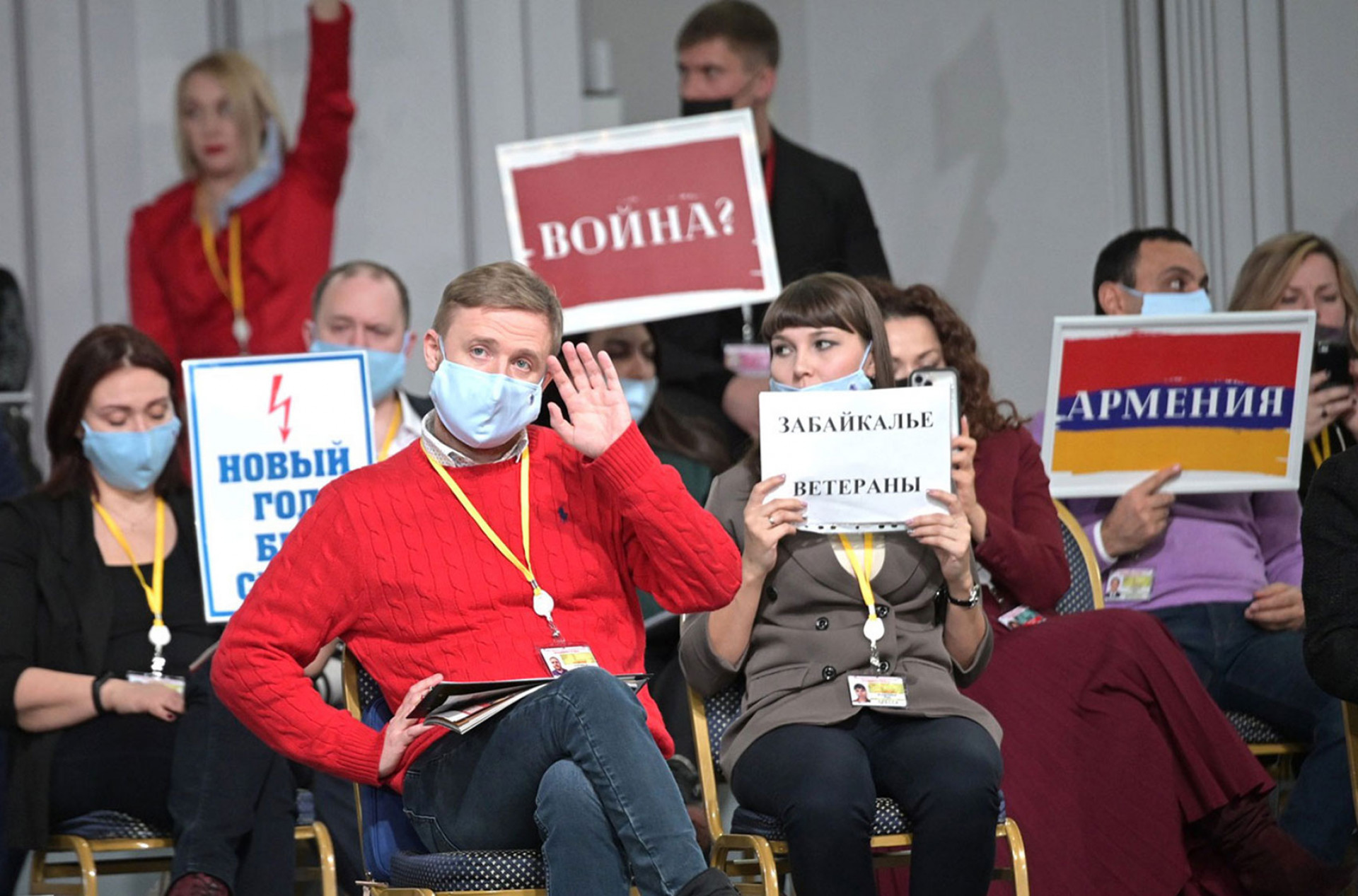 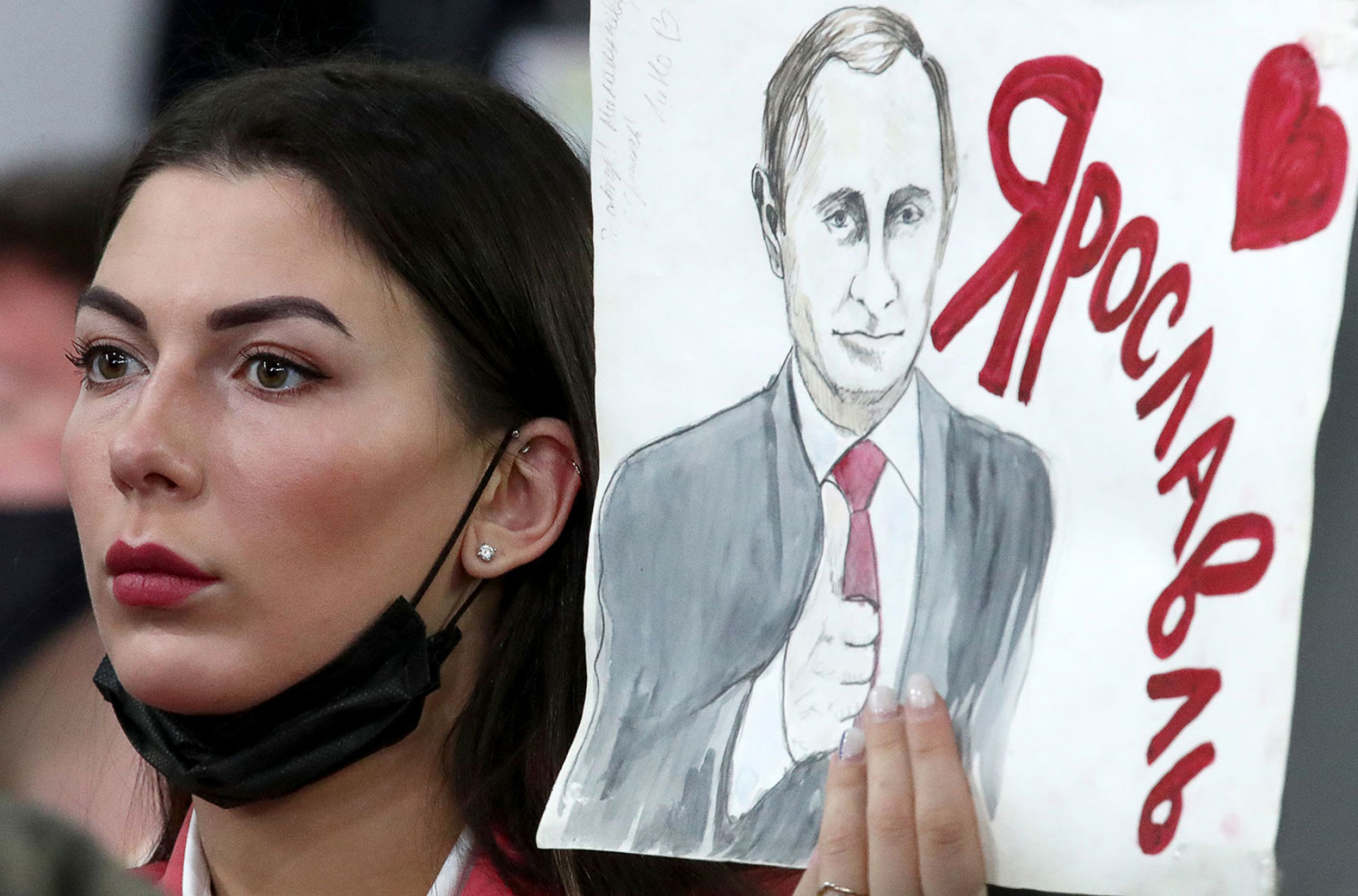 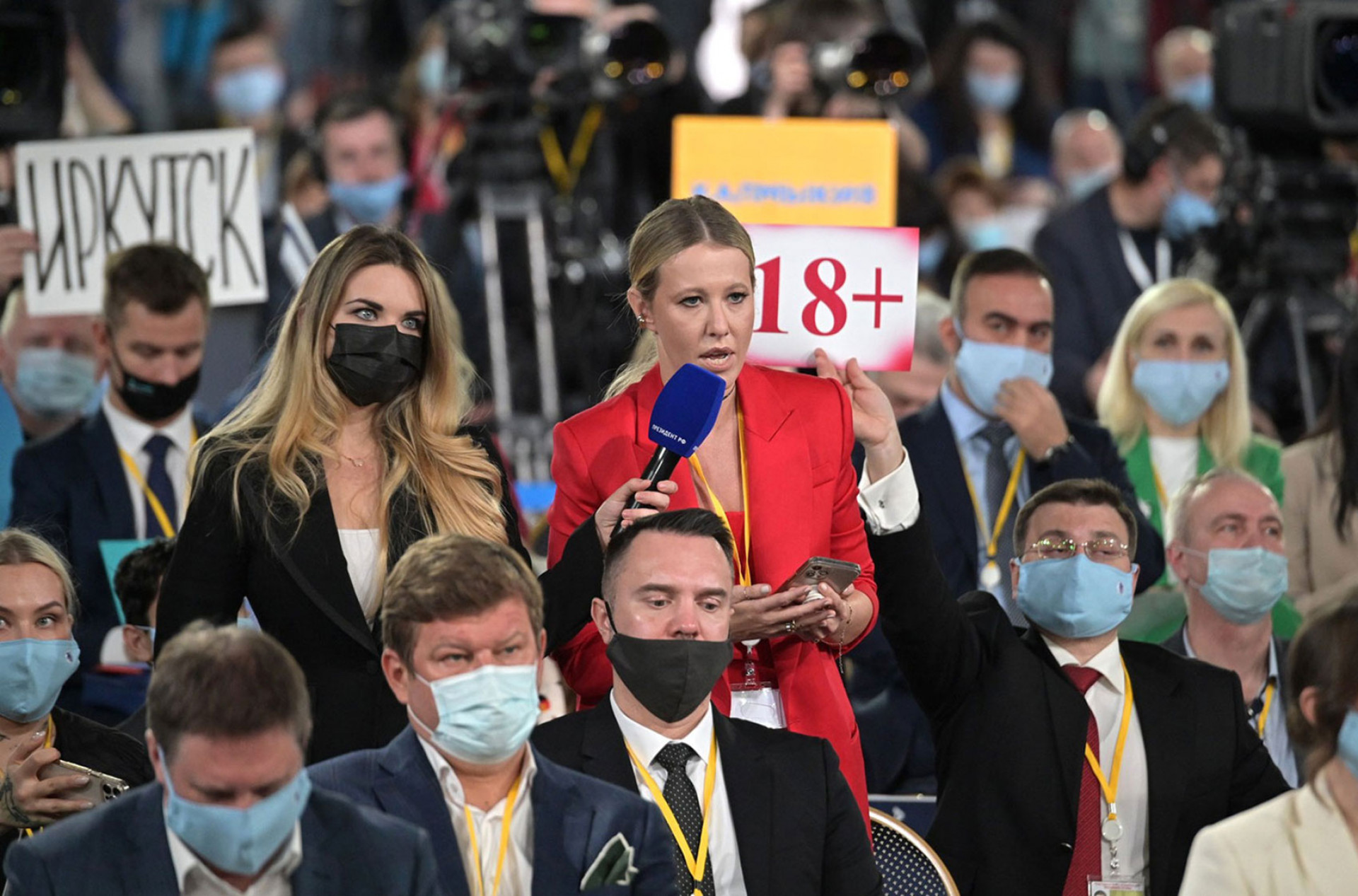 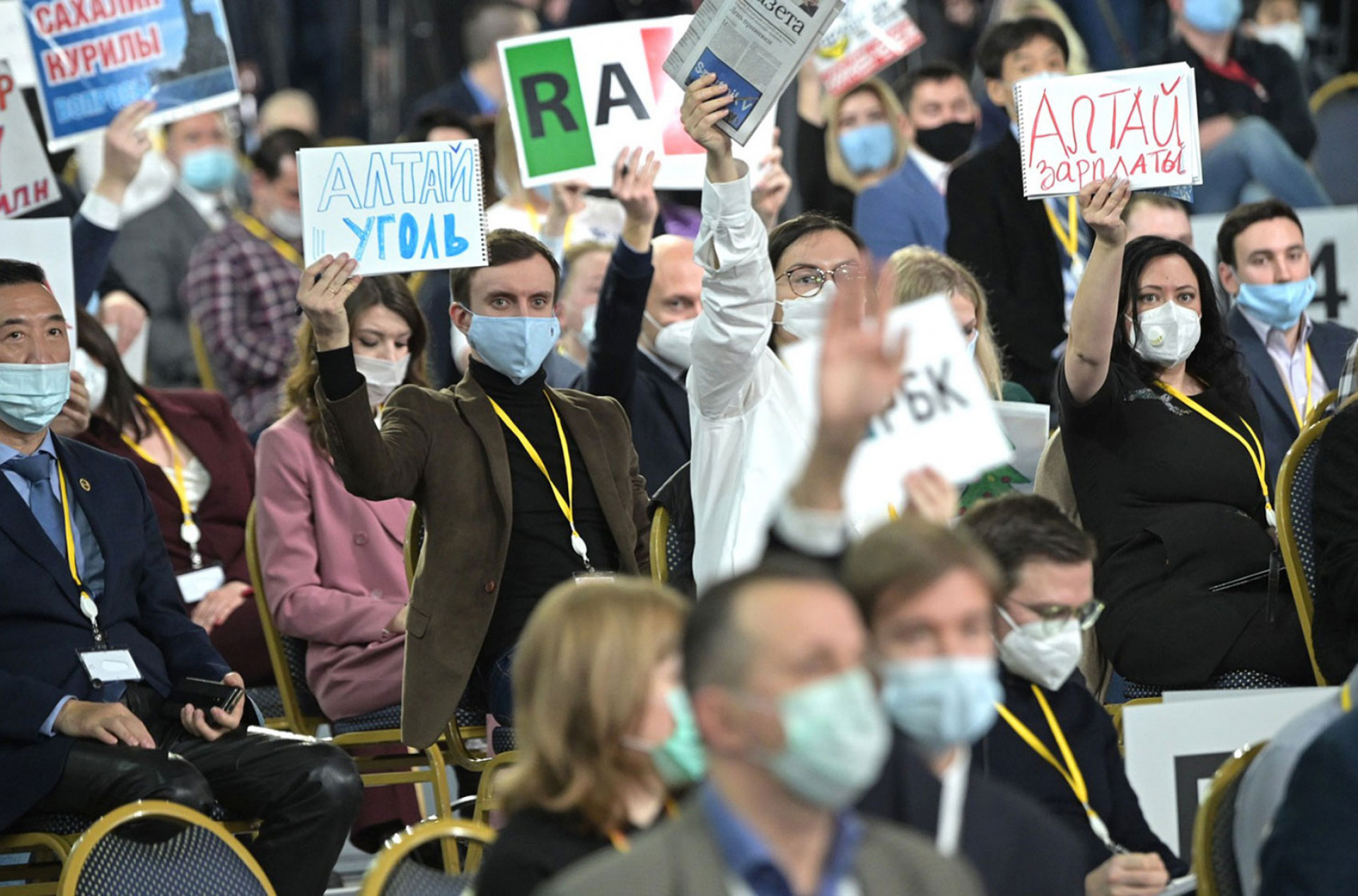 Asked about the situation with Ukraine and whether a war was realistic, Putin replied that Russia was responding to threats from Kiev. He called the 2014 Maidan Revolution a “bloody coup d’etat” and accused Ukrainian “extremists” of planning operations to retake Crimea and the Donbass.

“We must think about the prospects of our own security. We have to keep an eye on what is happening in Ukraine, and on when they might attack,” he says.

Putin referred emotionally to the plight of Donbass’ inhabitants and stressed that the region’s residents alone should determine its future, adding that Russia was ready to act as a mediator to "create a better future for the people living there.”

Putin claimed that Ukraine “refuses to talk” to Donbass representatives and pointed a finger at Ukrainian leader Volodymyr Zelenskiy, who he said rose to power on promises to end the war and implement the Minsk Accords but had since “come under the influence of radical elements.”

In response to a question about Moscow’s tensions with the West, Putin said his country’s actions will not depend on talks with the U.S. on his proposed security guarantees, but on the “unconditional provision of Russia's security.”

He stressed that NATO’s expansion to the east was “unacceptable” and continued to slam the U.S., which he said “brazenly lied” about NATO’s “five waves of expansion.”

“The U.S. is placing rockets at our doorstep... How would the U.S. react if we delivered rockets near their borders with Canada or Mexico?” he said.

With the second year of the pandemic coming to a close and Russia’s excess death toll among the highest in the world, the coronavirus was a constant presence through the press conference.

Putin bemoaned Russia’s low vaccination rate — currently at around 45% of adults after a year-long vaccination campaign — and blamed it for the country’s Covid-19 death rate, itself one of the world’s highest.

Polls have shown that a consistent, though decreasing, majority of Russians are suspicious of the vaccine and do not plan to inoculate themselves.

However, Putin reiterated his long-standing opposition to vaccine mandates, saying that those reluctant to vaccinate should be treated “respectfully” and have the issue “explained” to them.

Nonetheless, the president singled out critics of vaccination, who he accused of using the issue to bolster their public profile and of being “dishonest.” Russia’s Communist Party opposition has been leveraging anti-vaccine and anti-lockdown sentiment into a modest increase in its own opinion polling in recent months.

The first few questions of the press conference were dedicated to Russia’s economy, which has recovered to its pre-coronavirus state but has slowed in recent months.

Putin said Russia had recovered better from the pandemic compared to many developed countries, listed off a number of economic statistics and said he expected real incomes — which are around 10% lower than they were in 2013 — to rise by 3.5% this year. But he listed growing inflation and the country’s demographic situation as major challenges facing the economy.

Inflation is currently at a six-year high of 8.4% and he said Russian business figures complain to him every day about the high interest rates introduced by the Central Bank to tame price risis. However, he defended the Central Bank’s policy and its independence.

“You can ‘scold’ the Central Bank for raising rates — as representatives of the real economy do, not on camera, but at meetings with me — but if you do not do this, it will be like in Turkey,” Putin said, referring to the Turkish lira’s extreme volatility in recent weeks after its Central Bank cut interest rates despite high inflation.

The president also said Gazprom was not to blame for record gas prices in Europe and called on countries to sign long-term agreements with the Russian state-controlled gas company if it wants to ensure stable supplies at fixed prices.

“With long-term contracts, prices are three, four, or even seven times cheaper,” Putin says. Europe has in recent years moved towards shorter-term agreements which give more flexibility, but require buying more gas at market prices. “I see these accusations that Gazprom has not booked extra capacity on the Yamal-Europe route. This is because buyers have not made any purchase orders.”

Putin repeated his long-standing disdain of Western “liberal” values and defended so-called “traditional values” in response to a question from the state-run RT broadcaster on cancel culture and the controversy surrounding "Harry Potter” author J.K. Rowling’s comments on transgender people.

“I adhere to the traditional approach — a woman is a woman, a man is a man, a mother is a mother, a father is a father,” Putin said, adding that he hoped that Russians had enough defenses against gender-fluid "obscurantism.”

In his answer, Putin said cancel culture was "like the coronavirus,” with new variants frequently appearing,” adding that following traditional values was Russia’s proposed “antidote.”

He claimed without evidence that Western countries have failed to provide proof of Navalny’s August 2020 poisoning with the Novichok nerve agent in Siberia.

“Give us a reason to open a criminal case. But if there’s nothing to answer, let’s turn this page,” Putin said. “That Novichok or whatever it is — at least give us [samples],” Putin said.

Putin hinted that Navalny serves “foreign interests” that he compared to figures who “destroyed” the Russian Empire and the Soviet Union “from the inside,” and accused the activist of using politics as a “shield” from his criminal conviction.

Navalny returned to Russia in early 2021, where he was promptly sentenced to 2.5 years in prison for violating parole while in recovery abroad.

When asked about Russia's labeling of independent media and NGOs as "foreign agents" this year, he said that such legislation originated in the U.S. in the 1930s and claimed that Russia's "foreign agents" law is more liberal than its Western equivalents.

“It should be clear to everyone that punishment for these offenses is inevitable,” he said, adding that the investigations “should of course use the capabilities of civil society.”

In addition to the host of reporters from domestic media, Putin took questions from British, Italian, Kazakh, Chinese and Belarusian outlets. In answers to the latter three, he stressed Russia’s strong, friendly economic and cultural relations with their respective countries.

To an Italian reporter, Putin said that despite Italy’s membership in NATO and the EU, he hoped for ongoing cooperation with the country in various spheres. Meanwhile, he slammed a reporter from Britain’s Sky News for what he said was the West’s hostile foreign policy toward Russia.

When asked about Russia’s relations with the new Taliban regime in Afghanistan, he did not say whether Russia would recognize the new government in Kabul, but said he hoped the situation in the country would be stable and warned against the penetration of extremists into the bordering Central Asian republics. He also called on the West to unfreeze Afghanistan’s financial assets, saying the country is on the brink of a widespread humanitarian crisis.

Putin also discussed closer integration with Belarus and its embattled leader Alexander Lukashenko. Moscow and Minsk are working on a number of proposals to closer integrate the two countries, as Russia has become Belarus’ key financial and political supporter amid widespread international isolation of the Lukashenko regime over the past year.

“We are building a ‘Union State,’” Putin said, but noted that the level of integration between Russia and Belarus was “at a much lower level than that in the European Union. It’s incomparable.”

In an unexpected turn of events, Putin was asked about his relationship with Father Frost ⁠— the Russian version of Santa Claus. The question was asked by a journalist based in Veliky Ustyug ⁠— a town in northwest Russia that is home to the mythical figure.

Putin thanked Father Frost for having helped him become president and urged the mythical figure to help carry out Moscow's plans.

"My relationship with Father Frost has always developed in a good way," Putin said.

"I am grateful to him that I can meet with you in my capacity…I can advocate for Father Frost and remind the plaintiff that Father Frost only fulfils the wishes of boys and girls who have been good."

World leaders rushed to congratulate Biden after U.S. networks declared him the winner of the Nov. 3 presidential vote.
PRESIDENTIAL IMMUNITY

The proposed new law is part of constitutional reforms that pave the way for Putin to extend his rule until 2036.
nagorno-karabakh

Russia ‘Open’ to Return of Armenia-Held Land to Azerbaijan – Putin

The Armenia-controlled districts surrounding Nagorno-Karabakh are key parts of hampered Russian, French and U.S.-led peace talks.
cause of death

Putin: Russia's Rise in Coronavirus Deaths Due to Improved Methodology

His statement comes as Russia has seen record numbers of new infections and deaths over the past week.