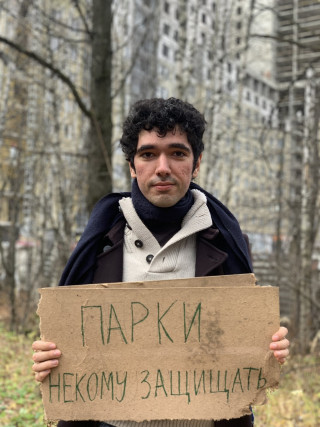 On Oct. 22, the day of the Global Climate Strike, a strange gust of wind hit the Kremlin, damaging the parapet atop its outer wall. Fortunately, no theories of a U.S. global climate conspiracy have cropped up to explain the freak incident, but it does show that the climate crisis can strike in even the most heavily protected and unexpected places.

In Russia, the climate crisis has hit much more than just the Kremlin.

In 2021, fires destroyed 17.08 million hectares of Russian forest — a nine-year record, according to the Russian office of Greenpeace. Just a Google search shows how badly Russia was hit by floods this year.

If you believe the official estimate that the damage amounted to tens of billions of rubles, it doesn’t seem too catastrophic. But given that Russian leaders so rarely tell the truth and consistently downplay the magnitude of disasters, it is difficult to put any stock in these figures.

How Is Climate Change Impacting Russia?

Even listing all the problems that Russia faces in connection with the climate crisis is a tough task.

Russia ranks first in the world in terms of territory, and probably somewhere at the bottom in terms of understanding the link between the climate crisis and how those territories are affected at the local level.

For example, Dagestan is suffering from desertification — clearly a result of global warming — and yet state-owned media make no mention of it. Permafrost is melting, wrecking infrastructure all over Russia.

In Russia, the consequences of these accumulating natural disasters are almost impossible to measure because everyone is at odds with everyone else.

How can you put your faith in a scientific community that depends on the state for its survival? How can you believe official figures about losses from melting permafrost when you have absolutely no benchmarks against which to gauge them, and when the phenomenon itself remains entirely outside of most people’s daily experience or knowledge base?

A black sky hangs over Russia

Krasnoyarsk in Siberia has more than once issued a “black sky” alert — a problem stemming primarily from the region’s burning of brown coal.

When it happened in February 2020, we decided to demonstrate our solidarity with the local residents by staging pickets across the country, from Moscow to Vladivostok.

Although only several dozen people turned out, it was amazing for Russia and as a result, news of our handful of picketers was retweeted by Swedish environmental activist Greta Thunberg, thereby throwing the media spotlight on our actions.

Opposition politicians also wrote about it and even the government of Krasnoyarsk issued a response of one sort or another to the problem. It was ironic that Greta Thunberg reacted to the problem in Krasnoyarsk even before regional authorities did.

True, this is only a start, a first step towards understanding the connection between the global problem and various local crises afflicting everyone. But such actions of solidarity inspire us all to continue the struggle, not only with the system, but also with the climate — that has become a climate of depression and learned helplessness.

Back before the pandemic, I travelled to the mining town of Novokuznetsk to see for myself the price we were paying for mining coal in Russia. And my first thought upon seeing the conditions was: How can people live like this? How is this even possible?

Then came a report from the Eco Defense organization, which the Kommersant newspaper quoted as finding that in 2019, the mortality rate in the main coal region of the country was 16% higher than the average for Russia.

The death rate from malignant neoplasms noticeably increased in Kuzbass, rising from 208.94 per 100,000 people in 2003 to 240.8 in 2019. According to official statistics, for almost 30 years mortality from respiratory diseases in the Kemerovo region has significantly exceeded the national average, totaling 75.95 deaths per 100,000 people in Kuzbass compared to 58.98 for Russia as a whole.

These are not just dry numbers. They represent the stories of millions of people whose livelihoods depend on coal mining.

Russia needs to affect a just transition to clean energy. It needs climate activists who will demand changes to the country’s climate and environmental policies. But the most important thing Russians need now is to face the terrible truth. For decades, this government has denied the crisis and done nothing. The coming years will be difficult, leaving us no choice but to act.

There are no simple solutions. We must fight the "foreign agents" law that is stifling Russia’s independent media. We must educate ourselves and demand the release of political prisoners. The climate crisis is a human rights crisis — a crisis that exacerbates all other problems. And Russia’s greatest place of vulnerability is not the Kremlin, but the ordinary people like us who are afraid for their future, but who still do something because the price of inaction is too high.

Our future cannot be measured in money — and it is more important than politics.

Thanks for signing up!
Read more about: Climate , Climate change

The gas giant has admitted a pipeline leak spewed millions of cubic meters of the potent greenhouse gas into the atmosphere earlier in June.
opinion Elena Agarkova Belov

Russia Should Get Behind Arctic Ban on Dirty Fuel

Russia is watering down a block on heavy fuel oil — a toxic pollutant — in the Arctic. That could be a dangerous mistake.
Eco Disaster

Scientists suggested that up to 95% of marine life living along the seabed in the affected area had died.
COMPLETELY UNPREPARED

Russia’s Coronavirus Recovery Plan Has No Space for Renewables

Without hydropower, just 0.16% of Russia’s electricity comes from renewable sources.