Recently I’ve often found myself turning over events from my life and trying to understand how I ended up here.

It’s June 2011. A display including my photograph decorates the square in front of the central department store in my native Novosibirsk. A high school graduate with a wide smile and a caption: “The district is proud of her.” Like the district, I was also very proud of myself then. I had just finished school with a gold medal and was about to enter the journalism faculty in Moscow University. I was full of hope. A few more years and I would become a correspondent for one of the publications I had devoured throughout my school years.

And now December of that year. I’m 17, and I’m attending my first protest on Prospekt Sakharova in Moscow — for fair elections, free media and the transfer of power. Medvedev is president. It’s 30 rubles to the dollar. The publications I read are covering the biggest demonstrations since the early 1990s. Everyone is convinced that everything will soon change for the better.

Now it’s already March 2014. I’ll soon turn 20, and it’s my second day in a new job for a quality independent magazine. This is the day they broke up Lenta.ru, one of the publications I dreamed of working for, and I’m trying to put together an article about it. Everything really has changed — only for the worse.

By the summer of 2015, when I graduated with distinction from the journalism faculty, not one of those publications remained. The authorities had destroyed them in front of our eyes, one after another. But for some reason it still seems to me that journalism is my calling and the best profession in the world. So I start to work for Dozhd, the only independent television channel, then at a publication which it is now forbidden to name.

On July 15, 2021 the authorities declared one of the few Russian investigative media, Proekt, where I had worked for the previous two years, an undesirable organization. That is, they essentially banned all our work and our articles, and we ourselves ended up under threat of prosecution. Several more of my colleagues were declared “foreign agents.”

Already unemployed, I left for the south of Russia to somehow recover my composure — and returned to Moscow still unemployed, but now “carrying out the functions of a media outlet designated a foreign agent.”

My surname was number 31 on the Ministry of Justice’s list.

In the days that followed it was as if I were attending my own funeral: Everyone around you remembers what a good journalist you were and laments the loss. Only several weeks later did I realize that this was all really happening to me, that the star pupil of whom the district was once “proud” was one and the same person as the newly cast “enemy of the people.” Many call the designation of “foreign agent” the “highest journalistic award,” but in reality there’s little pleasant about it. I don’t recommend it to anybody.

What do you need to do in order to become a foreign agent media outlet in Russia?

Formally — merely publish something on social media or in a media publication and receive a financial transfer from abroad. In theory, anybody can become a foreign agent, but for now — and I think it is clear why — the list contains only journalists and rights advocates. It’s not written in law, but clearly there is also one more condition — they must want to silence and punish you or your publication.

There are now 17 people on the list besides me. But this can change every week. Fridays in Russia really are black. The authorities deliberately update the lists of their enemies at the end of the week — clearly so there will be less of a stir.

What does it mean to be a foreign agent in practice?

Firstly, any of our articles in the media, podcasts and even posts on social networks — even stories or comments on Instagram — must be marked with a degrading 24-word disclaimer that you are not merely a journalist and a person, but a foreign agent. The alternative is fines and the prospect of a criminal case. And I live with this awareness day in, day out. Every time I post a landscape on Instagram I feel I’m taking a risk.

How Do Russia’s ‘Undesirable Organizations’ and ‘Foreign Agents’ Laws Work?

You also need to submit five 40-page reports a year on the source of your income and what you have spent it on. Every time I buy a coffee, I think about the fact that, in theory, anybody who wants can see this on the Justice Ministry’s website. Two mistakes in the report can lead to a sentence of up to two years. There’s also an aura of danger surrounding shopping now. On top of that, we’ll be faced with heaps of expenses to create and maintain a legal entity.

And in the end — it’s all just horribly unpleasant. What kind of foreign agent am I? It seems to me that in the course of my short life I’ve learned more about Russia and its people — thanks to assignments, work and constantly traveling around the country — than most of the deputies in the State Duma who voted for this law.

The most idiotic part of this is that this is a permanent status. There’s no description of procedure in the regulations, and until now no one has managed to get their name removed from this register. Though naturally I’d prefer to see the day not when amendments are made to the law, but when it’s completely abolished.

And although Maria Zakharova and Dmitry Peskov insist that a “foreign agent” designation does not equate to a ban on working as a journalist and on the whole doesn’t interfere with our life, colleagues of mine trying to get a job have already heard refusals with the words, “Sorry, we would have taken you, but it’s not safe.”

Plus, the majority of publications, independent outlets among them, are simply not willing to mark articles as written by foreign agents. By doing so they bring unwanted attention to themselves. This is real discrimination. My Facebook post that I was looking for work has 800 likes, 100 shares and heaps of kind words — but at most five offers.

To be honest, over the past weeks each of us who has received this status has had serious thoughts of leaving the profession — and some of emigration.

Thanks to this status, we ourselves have turned into the heroes of our articles, people in difficult circumstances who have collided with the state machine. More often than not our heroes are completely powerless in the face of the abuse of power, but we're lucky, we still have a voice for now: For example, another journalist called Olya Churakova and I have started recording a podcast called “Privyet, Ty Inoagent” (“Hi, You’re a Foreign Agent”) about what life is like for us in this new reality.

This allows us to stay in the profession regardless of the decisions made by media managers and officials. What’s more, the way things are going, more and more foreign agents will be appearing.

For now I have no answer to the question “What next?” Working as a journalist is becoming truly dangerous. Even writing a column for an English-language publication, it seems, can already be linked to work for somebody’s intelligence services. But to try and divine their logic and engage in self-censorship is a thankless task.

Worst of all, society doesn’t care about what’s happening in journalism. The majority have no need of quality information, so it’s unclear how much longer the remaining independent media will be able to hang on. The problem is that after 10 years I still think that it’s my calling and the best job in the world. 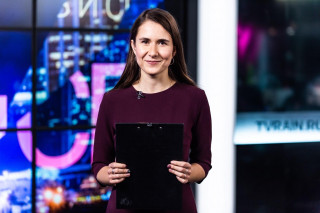 Sonya Groysman is a Russian journalist who has recently been labelled a 'foreign agent.' She now hosts the podcast "Hi, You Are a Foreign Agent"

Sonya Groysman is a Russian journalist who has recently been labelled a 'foreign agent.' She now hosts the podcast "Hi, You Are a Foreign Agent"
Read more about: Press freedom

By labelling the independent Dozhd broadcaster a 'foreign agent,' the Kremlin once again showed it doesn't play by the rules.
Internet Ban

Foreign social media companies could be banned by the Russian government if they don't set up local offices in Russia.
media flight

The news outlet cited financial and political difficulties as the basis of their decision to close.
world press freedom day

Nearly 250 journalists from 63 countries decried the "unprecedented pressure" against independent media like DOXA, Meduza and iStories.