When, last month, a girl in Canada shared a photo on social media of her bloodied feet after a work shift in heels as a waitress, it triggered a wave of condemnation in the West.

In Russia, the post had little impact. But a glance around a central Moscow shopping center is all it needs to conclude that many Russian women must be secretly sharing her pain. In a period of 15 minutes waiting at the Yevropeisky shopping center, eight women walk by in stiletto heels of eight centimeters or higher.

Irina, 31, an attractive, slender blonde, is visibly in a rush. But she stops in her tracks when asked to show off her shoes. Out comes the right foot, showcasing a towering 10-centimeter wedge sandal — it is slowly rotated right, then left. Then, she kicks her leg back, as if in a Marilyn Monroe-style photo shoot. And suddenly she's off again, darting away like a modern-day Cinderella.

And they're not reserved for special occasions, or Friday nights.

When stopped on a central Moscow street in the mid-afternoon, a girl wearing beige stilettos at least 9 centimeters high apologizes for not having the time to speak. "I'm on my way to work," she says.

"They lengthen your legs and improve your posture," she says. "So if a girl wants to look feminine, she's better off wearing heels." (She kindly looks past the sneakers worn by this The Moscow Times reporter.)

According to Alla Verber, Russian women's love for heels is in their DNA. A former Soviet émigré, Verber is one of Russia's most famous retail moguls and was instrumental in transforming what used to be the gray TsUM Soviet department store into a shopping playground for the Russian elite of the post 1990s.

Even during Soviet times, Verber says, Russian women had a penchant for shoes. "At that time, many women didn't even know their shoe size and there was almost nothing available, so they bought what they could. But everyone still tried to look good. Well-looked after shoes were seen as a sign of intelligence," she says.

With the collapse of the Soviet Union in the 1990s, however, shoes took center stage.

"People were hungry for beautiful things," says Verber. "No one ever wore flat shoes. No one. The general assumption was that a woman without heels was not beautiful," And, true to the Russian dogma of that time — "more is more" — women reached for the highest heels available, at 9 or 10 centimeters.

The image of Russian women in sky-high heels became a stereotype, says Verber. "Russian women were mocked abroad. People said: 'They'll wear heels even at the airport, or when going for a walk. Always, wherever.'"

A music video from the popular band "Leningrad." The Russian girl prepares herself to meet Prince Charming by painting the soles of her heels red with nail polish to fake the iconic red soles of the Louboutin shoe brand.

But times are changing. New fashion dictates more and more women are choosing sneakers over heels, at least during the daytime. There is also a growing public effort to wean women off their heels for the sake of their health.

In 2014, Russian lawmaker Oleg Mikheyev proposed introducing restrictions on high-heeled shoes, claiming that they led to various deformities. According to Mikheyev, 40 percent of Russian adults suffer from flat feet, and heels are partly to blame. "Our women shouldn't have to suffer pain because they're walking in the wrong footwear," he told The Moscow Times. Mikheyev's proposal got a cold reception — it was mostly ridiculed and trashed.

Other initiatives have taken a softer, and perhaps more successful, approach to nudge shoe lovers to go low. Orthopedists in white coats make frequent appearances on television shows to describe the cumulative health effects of a life in heels on wearers' backs, legs and feet.

Several years ago, Russian state television Channel One also started broadcasting a daily fashion advice segment titled "Without Heels" during their morning show. More than about fashion, the segment is educational and targets women's psychology.

"We want to show women they can be beautiful without heels, that wearing heels in an inappropriate situation is more of a minus, than a plus," says Marina Izvarina, who runs the "Dobroye Utro" show.

But the key to getting women to switch their footwear might not lie with them, but in the hands of the opposite sex. "In the first place, women wear heels for men," says Cosmopolitan's Maximova.

In a country where women outnumber men by almost 11 million, according to Russia's state statistics service, looking good at all times is more necessity than whim. A bright pink advertisement on a website offering courses on how to walk in heels announces: "Seventy-five percent of men prefer women in heels." No explanation is given for the statistic, but it certainly reflects what many Russian women take as true.

"Flat shoes were seen as unsexy, uninteresting," says Verber. And Cosmopolitan's Maximova says: "If you go on a date, then heels are a must." 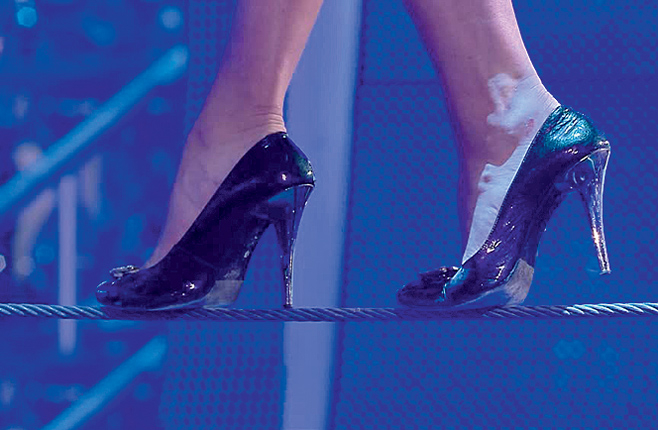 While changing fashion is gradually grinding down at the ubiquity of heels, Russians are also learning to laugh at themselves.

One of the country's most popular rock groups "Leningrad" recently made a video in which a girl receives an invite from Prince Charming to go see a Van Gogh exhibit.

With hours to go until deadline and spurred on by fantasies of marriage, the girl sets out on a hilarious quest to mask her natural appearance beneath fake eyelashes, styled hair and painted nails. Of course, no outfit is complete without "F*cking awesome pants and Louboutins," according to the catchy chorus.

The girl can hardly afford the iconic red-soled French shoes, so opts for fakes instead, painting the soles of cheap knock-off heels red with nail polish. Suffice to say, it ends in disaster.

If there was a lesson to be learnt from the video, not everyone got it. Inspired by the hit, a prominent Moscow modern art space launched a special St. Valentine's Day campaign granting women free entry to its own Van Gogh exhibit. The dress code: Stilettos — Louboutins, or otherwise.

It was an exhibit that almost rivaled Van Gogh.

No Way Back for Russian Women

For women's rights in Russia, the situation is not cut-and-dried. Conservative — one might even say backward — ideas about "a woman's place" certainly...
news

Russian Women — They're Just Not That Into You

When Russia plunged into chaos following the collapse of the Soviet Union, many of its citizens looked for a reliable way out — foreigners were viewed...
news

Russia remains a conservative country where traditional gender paradigms dominate. Rather than being admired for its progressive gender dynamics, Western...
deep freeze

Moscow said on Friday that Latvia's ambassador had been given two weeks to leave Russia, accusing the Baltic state and EU member of "total Russophobia...