2016 marks the 75th anniversary of the outbreak of the Great Patriotic War in Russia. It was an event which was to leave an indelible mark on the country, as it did on the rest of the world. On Wednesday a unique cultural collaboration featuring drawings and sketches from this period will arrive in Moscow. "Dual Perspectives" explores how the visual medium allowed two men on opposite fronts to express themselves, communicate with their families and spontaneously express the emotional intensity of their wartime years.

While events such as Victory day constitute an official reaction to the tragedy of war, the records and drawings of those who witnessed events remain a crucial and powerful reminder of the individual's human experience in history. Removed from the posters and paintings under the patronage of their respective governments, many soldiers drew and painted simply for themselves, their friends and their families. This "unofficial" art is rarely exhibited nationally, let alone outside its native country, but it provides a uniquely powerful and personal perspective on the reality of war.

Russian Pavel Ivanovich Afonin and British Edward Arthur Milligan both took up arms in the global struggle against Nazi Germany when in their twenties. But both of them also took up something else — a sketchpad and pencil. "Dual Perspectives" forms part of ARCH Moscow (The International Festival of Architecture and Design) and explores the personal and artistic legacy of two young men caught up in World War II.

Pavel Afonin had just finished his third year of studies at the Moscow Architectural Institute university when war broke out. He joined the Red Army on the Eastern Front, marching from Moscow to Berlin before being severely wounded during the Leningrad offensive in 1944. Despite the interruption to his studies he still dreamed of completing his education and he would draw and sketch in the lulls between battles and marches.

Ksenia Afonina, the curator of the exhibition, found her family archives a rich resource for the project — her grandfather was Afonin. "He was a dedicated and gifted artist from a very young age. The outbreak of war interrupted his artistic career, but he continued drawing while crossing Europe with the Red Army as a sapper," she said in an interview with The Moscow Times. "After he passed away in 2011, we found his albums of amazing sketches and portraits which we were not aware of before, and this prompted my initial idea to display his works in the UK." Afonina is currently curating an exhibition of Russian artist-veterans, "Art at the Front," at the Mission of Rossotrudnichestvo in London. 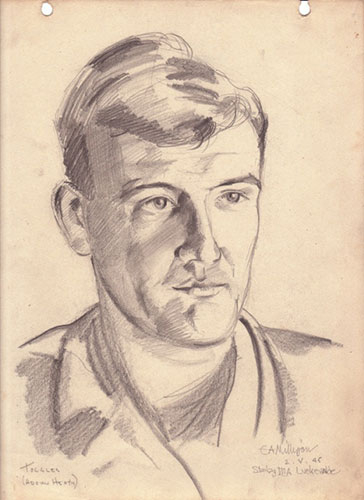 While Birmingham-born Milligan had no formal artistic training, he demonstrated great artistic aptitude, something that was to be a powerful creative and emotional outlet during the war. He trained in the Royal Air Force and was captured by German soldiers after his plane was shot down in 1944. Even during the hardships of life in a prisoner-of-war camp he drew remarkable portraits and studies of his friends and fellow inmates. He even organized an arts and crafts exhibition at the camp in which prisoners pinned over 100 entries to blankets in the barracks for fellow inmates and German commanders to view. As Russian forces advanced Ted and other captured soldiers were forced on a deadly night march towards Berlin in January 1945. Despite the horrific conditions en route and his own exhaustion, Milligan recorded the experience through diary entries and sketches of the scenes he witnessed.

Art as a Cross-Cultural Language

After the war both men continued on their artistic paths. Afonin returned to university, graduated and moved to St. Petersburg, where he would go on to lead the department of Architecture at the Military Engineer-Construction Institute for 16 years. Meanwhile Milligan embarked on a successful career as an architect and artist in the UK. While the two men never met, their lives hold many parallels. Art for them was not just an aesthetic end point, but a creative process they could take comfort and joy from even during their most trying periods. Their art also serves as a precious war-time record for future generations.

"Visual art is an effective cross-cultural language," said Afonina. "It is also a medium of great power that helped Pavel and Ted to survive some of the most difficult moments during the war and kept many other families informed that their beloved ones were still alive. They both created many portraits for their comrades to send home which will be displayed at the exhibition."

The portraits provide an intensely personal perspective on the war, drawing you in to consider the faces and the stories of the men they depict — and the stories of the men who drew them. They also offer an insightful alternative narrative that is separate from the nations the men belonged to. Afonin's drawings for example are far removed from the Russian state-sponsored dialogue of Socialist Realism that reigned in the middle of the 20th century.

"The personal visual encounters of the Second World War work as genuine reminders and warnings for us to avoid military conflicts. They help to better understand our shared history and bring the focus on human aspect of every military conflict — beyond any geopolitical views and aspirations," said Afonina. "I personally hope that this exhibition will make its small contribution towards better understanding and peace between our countries and nations."

"Dual Perspectives: Second World War drawings by architect veterans from Russia and Britain" will be on display at ARCH Moscow from May 18 through May 22. TsDKh (Central Artist's House). 10 Ulitsa Krymsky Val. Metro Oktyabrskaya, Park Kultury. For more information see wartimeart.com.

The exhibition will then move to the Moscow Institute of Architecture from May 23 through June 5. 11 Rozhdestvenka Ulitsa. Metro Kuznetsky Most. marhi.ru.