A chorus donning black tuxedos and bowler hats twirl multicolored umbrellas as rain pours down on them from the stage rafters. Shrieks of delight from spectators in the front rows — caught by the deluge — mingle with exuberant applause. It seems that “Singing in the Rain” has made a splash in more ways than one on the Moscow stage.

The show ends its stint at the Rossiya Theater in Pushkin Square on May 28, marking the end of eight months of upbeat music, fancy footwork and witty gags as the production leaves the capital for St. Petersburg. When the curtain falls on the final performance later this month “Singing in the Rain” will have been performed more than 300 times to the delight of thousands of musical-loving Muscovites.

“We can now confidently say that “Singing in the Rain” has been a complete breakthrough production,” said Dmitry Bogachyov, the head of the Stage Entertainment theater company, in a written statement to The Moscow Times. “A year ago, during the process of selecting productions for the upcoming theater season, I was guided by a wish to acquaint Russian audiences with the upbeat music, virtuosic tap dance and indomitable optimism of this classic early 20th-century Broadway hit. I really wanted to bring its cheer to Moscow.” 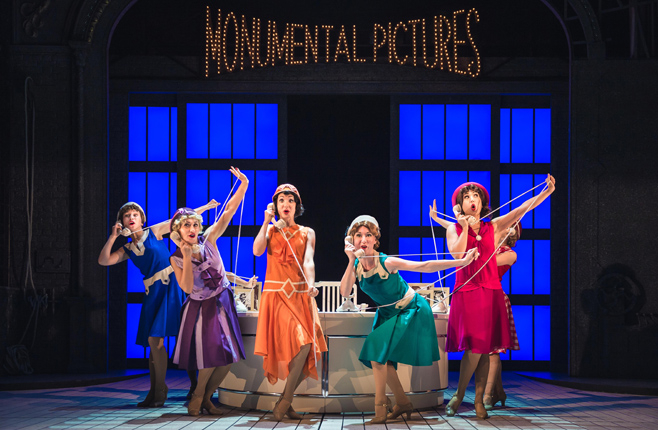 The production is uniquely demanding for the main cast members, requiring singing, dancing and acting.

And the lighthearted American musical has certainly proven to be a be a roaring success in a country which — on a political level at least — holds increasingly hostile relations with the United States. Going from the atmosphere of the crowd leaving the theater after the performance if there’s an appetite for one U.S. export here in Moscow, it's musical theater. The stage version of “Singing in the Rain” was adapted from a 1952 musical comedy of the same name, starring Gene Kelly, Donald O’Connor and Debbie Reynolds. The film has now been afforded legendary status and is often cited as the best movie musical ever made.

The plot satirizes and parodies the panic of actors and filmmakers alike when the “talkies” arrive in Hollywood and a new era of cinema dawns. Much of the musical’s hilarity comes from the glamorous but vocally challenged screen diva Lina Lamont (played by Anastasia Stotskaya) who believes herself to be in romantic relationship with her onscreen partner Don Lockwood (Stanislav Chunikhin). Lina’s shrill and squawky voice means her attempts at sound recording fall flat, until Kathy Seldes (Yulia Iva) dubs her own rich, beautiful voice over the top. Add to the setup a classic romance, some slapstick, an infectiously upbeat score and some umbrellas and you’ve got yourself an all singing, all dancing, all raining hit.

The production is cleverly framed by film inserts which show the audience parts of the film the characters are working on. These come into their prime at the premier of the film studio’s first “talking” film. It’s a complete disaster — as you might have predicted — with off-sync dubbing creating a ludicrously funny set up in which each character appears to say the other’s lines. While gags like this offer a wryly witty comment on the authenticity of cinema acting, it’s the visual comedy in the play which is the most enjoyable. The scene where Kathy accidentally throws a cake intended for Don at Lina for example, or a comic tap dance in the first act by Don and his sidekick Cosmo. 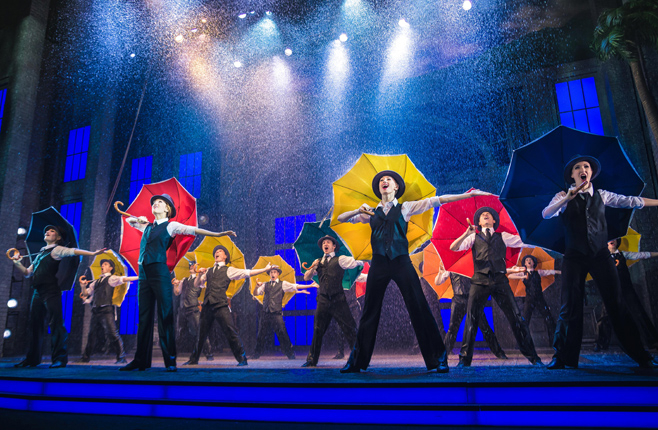 After the curtain falls on the final performance on May 28, the production will move to St. Petersburg.

The success of the show rides in its sheer vitality. 3 hours fly by in a whirl of sequins, high-kicks and 1920’s glamor. The eponymous song “Singing in the Rain,” performed just before the break to allow stage hands to mop away the swimming pool on the floor, is an obvious highlight. It’s a physically grueling routine — just imagine vigorously tap dancing in a sodden three-piece suit. But Chunikhin pulls it off with nonchalant ease, capturing a hint of the Gene Kelly charisma that dazzled audiences in the original film. “Singing in the Rain has to be one of the biggest thrills of my life — it’s on a par with the birth of my daughter even,” said Chunikhin. “In addition to my professional development, it’s been a huge life experience. This production is an unreal joy for a musical artist because it reveals all three musical components: singing, acting and dance.”

The Rossiya Theater’s performers have done an admiral job emanating the fleet feet of their overseas counterparts. Particularly when you consider that much of the show’s choreography was completely unfamiliar to them. “During casting it it became apparent that almost no Russian performers were trained in tap dance. But that did not stop us, it strengthened our resolve. The performers took no mercy on themselves and mastered the material through hours of grueling training sessions and rehearsals,” said Bogachyov.

A creative interpretation, the show in Moscow has been entirely produced in Russian language from script to score. But even if your Russian is a little shaky, the slapstick humor, effervescent music and contagious dancing will keep you entertained.

While the finesse isn’t quite of Broadway standards, you’d have to be a cold, hard miser for “Singing in the Rain” to not leave you skipping out of the theater into Pushkin Square with a spring in your step and a happy refrain in your heart. Some advice —just remember to ask for a rain poncho if you’re going to sit on the front row.

Frida Kahlo never made it over the Iron Curtain. The closest she came to the Soviet Union was a brief fling with Leon Trotsky in Mexico City.
news

An interactive “Museum of Emotions” is about to open its doors in St.Petersburg, the gazeta.ru news website reported Tuesday.
news

As the country slowly recovers from the long May holidays, so do the Moscow concert venues. This weekend offers you the perfect opportunity to sample...
Awards season