Contribute Today
By Timur Zolotoev
May 6, 2016

To mark the 150th anniversary of Kandinsky’s birth, the Tretyakov Gallery has collaborated with the Hermitage Museum to bring two of Vasily Kandinsky's most iconic works together in Moscow. "Composition VI" and “Composition VII” were created in 1913 and are considered to embody the key ideas of one of the founding fathers and principle theorists of abstract art.

The masterpieces face one another other in a hexagonal pavilion – built by the renowned Russian architect Sergei Choban – within the New Tretyakov Gallery on Krymsky Val. Several halls of the Soviet art permanent display were radically transformed in what the curators of the exhibition described as a “daring” project.

Kandinsky’s artistic and aesthetic theories were greatly influenced by the philosophical, musical and scientific ideas of the early 20th century. Having always been in touch with the European cultural scene, Kandinsky exchanged ideas with prominent figures such as artist Paul Klee, architect Walter Gropius — who invited him to teach at Bauhaus — and expressionist Austrian composer Arnold Schoenberg. Kandinsky was greatly impressed by Schoenberg’s revolutionary approach to harmony and tonality, which was similar to what he was seeking to achieve in painting.

Abstract by nature, music was a key driving force behind Kandinsky’s search for pure forms and colors. Likening painting to composing music, he often used musical terms, such as “impressions” and “compositions” to identify his works. A crucial concept in the artist’s system is counterpoint — the art of combining different melodic lines in a musical composition. Borrowing the idea from musical theory, he applied it to painting, describing it as superior way of organizing an artwork.

“Composition VI” and “Composition VII” were created as the culmination of Kandinsky’s theory of abstract art. “When Kandinsky was painting these compositions he was already quite close with Schoenberg. In general Kandinsky was a very musical person,” said Lyudmila Bobrovskaya, the curator of the exhibition, in an interview with The Moscow Times. 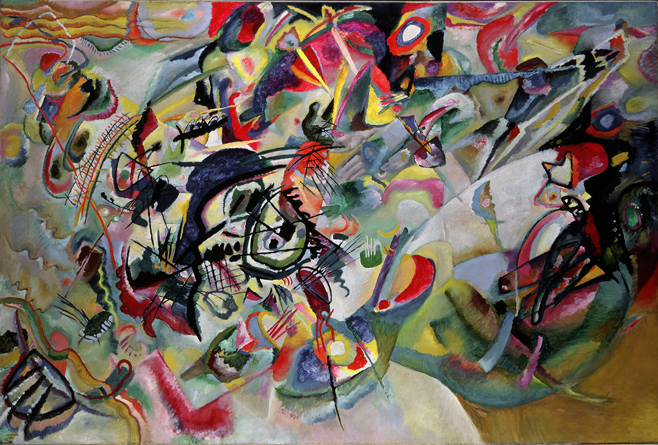 Kandinsky believed that figurative art distracted the observer by its visual references to the real world, thus making color and form secondary. Abstract art in its turn sets color and form free, liberating them from any fixed references.

“He did not want any ideas to be directly reflected in his paintings, but rather wanted his paintings to provoke observers to reflect on themselves,” said Bobrovskaya. “The main advantage of abstract art is that it does not bind you to any literary allusions or history. Kandinsky’s key achievement is that in the beginning of the 20th century, the age of scientific discoveries, he tried to appeal to people’s souls.”

Kandinsky believed that an artist is a prophet whose goal is to express spirituality by means of art and who is guided by the principle of inner necessity — a devotion to inner beauty and spiritual desire. Often drawing inspiration from the Bible, Kandinsky made the Apocalypse a common theme in his compositions. The series of sketches preceding “Composition VI” refer to this.

Trying to explain “Composition VI” and “Composition VII” is a daunting task, as they are first and foremost meant to resonate with observer’s soul. “Everyone will see what they want to see – be that a cat, a whale or an angel blowing a trumpet,” Bobrovskaya said of “Composition VII.” “What is really important for Kandinsky is the state of mind into which the observers immerse themselves.”

The exhibition also features a multimedia project that visualizes Kandinsky’s path to his masterpieces by collecting the sketches and other works that preceded both compositions. These can be seen in a rotunda – reminiscent of Choban’s 2012 Venice Biennale pavilion – which the visitors pass on the way to the hexagonal room housing the paintings.

The whole exhibition is binary in its focus on the two masterpieces – they collide and harmonize at the same time. In short, they embody the Kandinsky counterpoint that allows the creation of a symphony on canvas.