Sitting on a deep leather sofa in his office, Mikhail Kasyanov looks much like he always has. There's the same no-nonsense demeanor, the expensive suit and his smooth, deep voice. He has an almost aristocratic style of talking, heavy and bureaucratic. He is a man who made it to the very top. For almost four years he held the post of prime minister, back before Putin stripped this post of its crucial political importance.

Back then, he never thought it would come to this. He didn't expect to become an outcast — publicly exposed, harassed, humiliated. He couldn't imagine that his role could ever be reduced to that of a rabbit at a greyhound race.

Today, it is rare that Kasyanov ever finishes a public meeting without being pestered and egged. An activist who helped him organize a pre-election event in the southern Russian city of Samara now faces criminal charges. The Chechen leader Ramzan Kadyrov posted an Instagram video of Kasyanov in the crosshairs of a sniper's rifle. Kadyrov's men have even followed him inside restaurants to mock him and smear his face with cake.

It went further when Kasyanov was secretly taped with a woman and saw the clip aired on national television. No opposition leader in Russia has ever been harassed quite so atrociously. "I was prepared for the pressure," says Kasyanov, "but I was not anticipating them to pick the lock to my apartment and install bugs and cameras. It's something only two special forces in Russia are capable of doing: the FSB or the FSO, the Federal Security Services. I don't know which it was. It came as a surprise."

In his 2008 autobiography, "Without Putin," Kasyanov is asked what he considers the most challenging situation he could face. "In chess, there is a term zugzwang," he answers. "It's when you can't skip your turn, yet every turn makes your position weaker."

It's an apt description for the position Mikhail Kasyanov now finds himself in, with the democratic coalition he is heading for the forthcoming State Duma election internally combusting.

The last few years have been a disaster for Russia's liberal opposition. Arrests and repressions spread fear among supporters and activists. The annexation of Crimea boosted Putin's ratings and marginalized his political opponents. Boris Nemtsov's murder in February 2015 came as an almost-fatal blow. The mood is grim.

When the Democratic Coalition emerged in late April 2015 to campaign for the next election cycle, it appeared as part of a re-brand for opposition party PARNAS, who crucially hold the ticket position needed to participate in the voting. "We knew PARNAS would not get anywhere on its own," said Alexei Navalny, one of the coalition's leaders. "We knew that we needed a coalition, but we've been outplayed by the Kremlin from the very start."

In September 2015, the coalition put forward joint candidates for four regional parliaments. They were barred from standing in three of the regions and suffered a crushing defeat in the fourth. "But the coalition survived," said Navalny. "We knew we had to get through the 5 percent barrier that's been set at the Duma election. We knew we needed primaries."

Last December the coalition officially offered Kasyanov first place on its electoral ballot. The other names would be decided through primaries that the Russian opposition would also use as a warm up to the Duma elections and to attract more supporters. It was also decided that the coalition would try to persuade at least two well-known and respected public figures to join Kasyanov as top names on the ballot. Among those targeted were two famous rock-singers, one politician, and even one well known television presenter. It is not an easy sell and the unprecedented harassment against Kasyanov and his allies show what might be at stake. He is still engaged in these negotiations, Kasyanov told The Moscow Times.

All was agreed and signed — or at least, so it seemed. 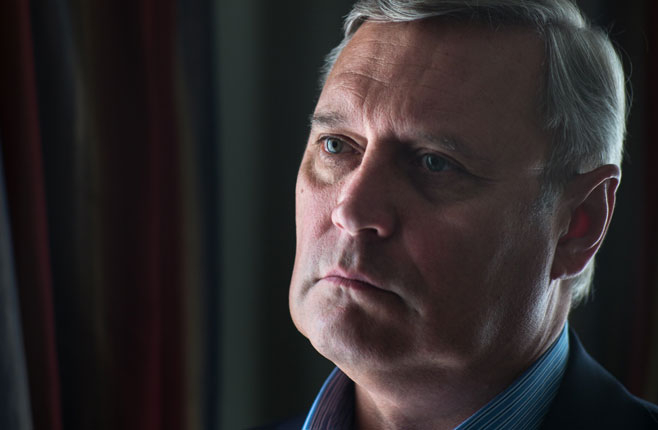 Mikhail Kasyanov says pressure to make him step down following publication of a sex tape is unprincipled and panders to the Kremlin's game.

In the Russian political elite, Kasyanov stands very much alone. Initially, he was neither a dissident nor even a politician. A professional bureaucrat by nature, he worked as an economist before a move to the Finance Ministry saw him settling debts Russia had inherited from the Soviet system. Gradually, he made his way to the very top as arguably the most successful Russian prime minister in recent history.

It's been more than twelve years since Putin unexpectedly fired Kasyanov. It has been speculated that the move was made from fear, a paranoia that Kasyanov might be conspiring against him. Putin's offer to stay on the team is usually not intended to be declined. Their last encounter was in December 2004, when Kasyanov rejected Putin's offer of a position as head of a new interstate bank structure. He was the only one in Russia's top circles to refuse such an offer, he says.

A political analyst and Kremlin insider at the time says the refusal was the natural result of Kasyanov's inability to compromise when it comes to self-respect. "Kasyanov always thought of himself as a Russian baron. He just couldn't stoop," the source said.

This was the only choice Kasyanov really made — the decision not to comply. The rest simply followed logically. "It turned out that the mission fell on me," Kasyanov says. "As I was able, despite all the pressure, to remain independent."

Those who know the politician speak of him with respect. "He's a fop and a hedonist, and believes now he's some kind of Che Guevara," a former official says. "But at the same time, he is a decent person and has never betrayed anyone."

Kasyanov's own supporters admit that he is not a perfect fit for his new role as firebrand politician. He is not a strong public speaker, and unlike Nemtsov or Navalny, it's still difficult to imagine Kasyanov ever campaigning on the metro or at bus stops. "I am not going to change myself," he maintains. "Yes, we all miss Nemtsov with his natural ability for street campaigning. I am going to be on the streets to the extent that I can and am comfortable with. That's what we decided when we agreed on the coalition."

Kasyanov is no longer popular. In late nineties he, too, was a target of the elites' PR television wars, when he was first nicknamed "Misha 2 percent," a reference to the 2-percent stake he allegedly took from government financial deals as a bribe. Kasyanov says he was reminded about the nickname from Putin himself during their last meeting in December 2004. "'Remember that name,' he told me, 'if you ever decide to go over to the opposition.'" It was a threat, and it was no accident when Putin used the moniker to refer to Kasyanov during his 2011 phone-in marathon.

With Putin's help, the nickname still sticks. Together with the fact he is living the life of Russian aristocrat — tennis, hunting, cars, food, travel, expensive leisure — Kasyanov looks more like a target for Navalny's electorate, young and leftish, keen to fight rich Russian kleptocrats, than their natural ally. Kasyanov recognizes this is a problem. "This is why we joined our forces, so that our bases could stand together. That is the coalition's achievement,"  he says.

"Victory has a thousand fathers, but defeat is an orphan," said former U.S. President John F. Kennedy. With every day, the prospect of winning an election looks ever bleaker, and Kasyanov's allies start ask where his real electoral base is. The primaries are failing after only few thousand activists signed up. The tension and the blame game within the coalition was easy to predict.

Genie Out of the Bottle

The opposition camp is used to intimidation and repression. Boris Nemtsov was killed. Alexei Navalny has been banned from taking part in the election; his brother sits in jail. Ilya Yashin went through harassment similar to Kasyanov. Standing against the Kremlin demands bravery and all of them have courage and character. And yet the Kremlin has succeeded in driving a wedge between them.

A week after the covert film of Kasyanov was aired on television, coalition co-leader Ilya Yashin unexpectedly declared that he would withdraw from the primaries. Despite sympathizing with Kasyanov on a personal level, he said that the tape would still cause serious political damage. He declared it a mistake to appoint a leader who would immediately become the target of the Kremlin's attacks.

His declaration was a starting gun. Kasyanov was accused of weighing the coalition down, of causing a huge negative rating that repelled supporters, of under-funding the campaign. He was not delivering as was expected, not fulfilling his promises, spending too much time abroad. He was living a self-indulgent lifestyle. The secret tapes, his allies kept saying, revealed that he had been discussing the infighting between his own allies with a team member.

"It was all mounting up, and after that video it's impossible to campaign at all," said Vladimir Milov, one of the leaders of coalition's Demokratichesky Vybor Party.

Leonid Volkov, Alexei Navalny's longtime campaign manager, agreed. "We never believed he would stay at the helm after what happened," he said. "We thought he would act responsibly and take the heat off us. That's what would happen in any other country."

Their demands are clear: Kasyanov has to step down from his top position on the ballot and take part in primaries with the other candidates. "Yashin made a mistake and there is no reason why the agreement should be reconsidered," said Denis Bilunov, coalition member and co-founder of the December 5th Party. "But since the genie is out of the bottle, the issue should be addressed."

Kasyanov is playing hardball. He is not making any concessions. He insists that the tape cannot be taken as an argument. "Revising our agreements under the Kremlin's pressure is weakness," he says. "It's harmful and it's impossible. Not only am I not agreeing with these arguments, I am not even entering this discussion. The rules were set consensually. The match is on. I am going only forward."

As he speaks, Kasyanov shows a convincing resolve. But, most probably, he understands that this fight is already lost, at least this time round. He knows that he will make little impact on the rebellion warmed by the Kremlin's covert operation and now raging within his camp.

There is also little doubt he will be the last to leave the sinking ship. He has been through zugzwang before and made his only choice — almost twelve years ago.