"Beauties of the Centuries" is a new exhibition at the AZ Museum, a museum dedicated to the work of the Soviet-era, non-conformist painter Anatoly Zverev. The AZ Museum was opened just last year, but this is already its third retrospective of the influential Soviet artist. The museum exhibitions are usually devoted to one theme in Zverev's oeuvre, which the museum is well-positioned to do, since it holds the largest collection of his paintings in the world.

The exhibition of Zverev's "beauties" — over 50 portraits of women — is designed to be viewed from the top floor to the bottom. It begins with a section entitled "Sit down, kid, and I'll immortalize you!" This is the phrase Zverev used to say to his models before starting to paint them. Here you can see all of his masterpieces, some of the best-known portraits, including of Tatiana Samoilova, a famous Soviet actress. Zverev always focused on the face and especially the eyes of his models. 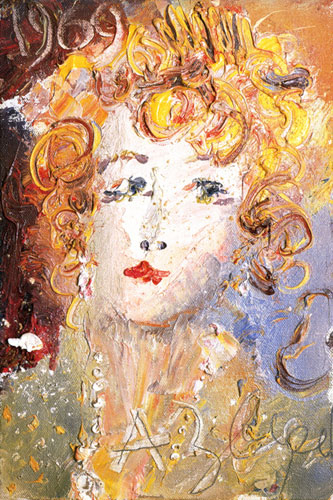 On the middle floor are the "beauties of the centuries" themselves. Here the curator Polina Lobachevskaya tried to explore the parallels between Zverev's various techniques and the grand eras in world art, starting with 1st century Fayum mummy portraits and continuing with the Renaissance (Rembrandt, Durer, and Cranach among others); impressionism (Renoir); and post-impressionism (Van Gogh). Jean Cocteau once wrote about Zverev that "He is the only artist to go through all the stages of Western painting from Picasso to our days" — and this exhibition is proof.

The first floor's part of the exhibition is called "Instants" — Zverev's black and white graphics. In his famous "Treatise on Art" Zverev wrote: "When inspiration comes over you, look, search for the instant." These instants are quick drawings, sometimes mere silhouettes that were meant to capture the essence of the person. If a model told Zverev, "But that's not me," he would usually respond: "If it's painted by me, it's you."

Zverev (1931-1986) was a painter born at the wrong time. His work did not fit into Soviet reality or the official vision of what art should be. He's considered the founder of the "Russian impressionism" of the 1960s, but his style of painting is very much his own — as his "beauties" show.

A group of dancers spin, stamp their feet and pump their arms in a whirl of motion and color as they rehearse a grueling dance named "the stricken...
news

The concert season is heating up like the weather and we had hard time choosing the best gigs this weekend. There's something for everyone, from new...
weekend kitchen

Oh, what to do with all the autumn mushrooms? Here's a delicious solution to a delightful problem.