A group of dancers spin, stamp their feet and pump their arms in a whirl of motion and color as they rehearse a grueling dance named "the stricken chicken" from the musical "Hairspray." The music ends and sweat drips from their brows. "Good! No one died, did they?" choreographer Dan Knechtges asks the group. "Ok, let's go again then!"

On Monday Broadway will come to Moscow as American actors, directors and choreographers collaborate with Russian artists — both established professionals and emerging performers — on a unique musical showcase. The performance is preceded by 10 days of theatrical workshops and an open lecture offering advice from industry experts to young dramatists.

The event is part of an unprecedented cultural collaboration between the non-profit organization The Broadway Dreams Foundation, the U.S. Embassy in Russia and the U.S. Department of State supported by Stage Entertainment Russia.

The program aims to support positive creative collaboration between America and Russia, while allowing Russian performers to develop their skills through workshops with some of Broadway's biggest names. Russia has a long tradition of excellence in performing arts, but musical theater? Not so much. It seems that change is afoot.

Dan Knechtges, a New-York based choreographer who has worked on countless on- and off-Broadway musicals and choreographed for the likes of Fatboy Slim, has come to Russia as part of the collaboration with the Broadway Dreams Foundation. What does he make of the caliber of the Russian artists he's working with today?

"Wonderful. The thing in New York is that our performers are sometimes a bit spoiled or 'over it' when it comes to rehearsals. It's been great fun to work with the Russian professionals here. I can really feel my spirit lifting," he said in an interview with The Moscow Times. "American culture has tendency to be bastardized, but if there's one cultural export that has an enduring appeal, it's musicals."

Knechtges has been working with The Broadway Dreams Foundation for nearly five years. A non-profit organization, it seeks to support talented young artists by providing training, mentoring and career opportunities in the performing arts. "The unique thing about initiatives by Broadway Dreams is that you have professionals and relative newcomers performing on stage as equals. Ryann Redmond is a Broadway star, and she will be playing Tracy [Turnblad] on Monday alongside other cast members." 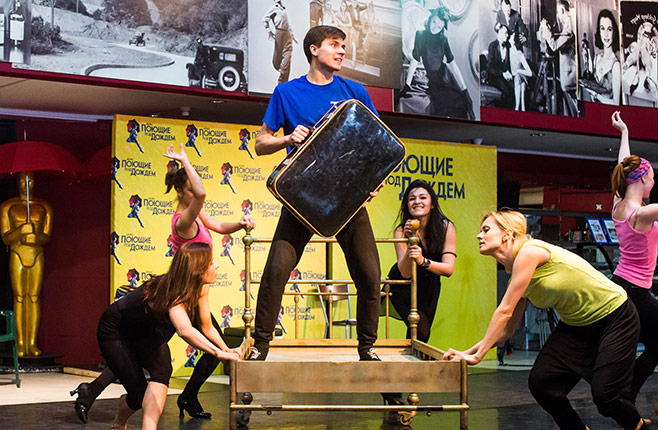 Performers rehearse a song from Cabaret.

Auditions for chorus and leading parts in Monday's performance took place over an intensive 3-day casting in which Russian professionals, theater students and amateurs competed against one another. Performing alongside Broadway stars is not only important in terms of the invaluable experience it offers, but also as it allows both parties to learn from one another's performance styles.

Olivier-nominated Stafford Arima, who most recently directed the 2015 Broadway production of "Allegiance," has been working closely with Russian performers in the run-up to Monday's production. Does he see a difference between Russian and American performers?

"Russia is the birthplace of Stanislavsky. There is a rich and textured theatrical tradition here. You can see that in the way that artists approach from the truth of the character and the situation they are portraying. They [the performers] are drawing on the experience of that training and passion. During the casting I was really struck by the hunger and enthusiasm of the people for their craft."

We talk in a brief quiet moment between rehearsals for various vignettes from the musical "Chess." Andrei Schkoldychenko, who currently plays the role of the phantom in Russia's "The Phantom of the Opera," is also the lead in "Chess" for Monday's showcase.

"Broadway Dreams really shows you how the discipline of training and performance can be put into practice. You can see the synergy between the 'student' and 'professional' on stage," said Stafford.

Quentin Earl Darrington, musical star of "Ragtime" and "Lost in the Stars," also noted the different theatrical approach of the Russian performers he has been working with.

"Initially they were intently focused on copying and imitating the exact movements or structures they saw. They were searching for perfection. I want them to find a way to search within so they could connect with the art and produce their own version of it," he said in an interview with The Moscow Times. Does he think that this process happens only with maturity? "It is something that can be achieved with maturity — yes, but also through vulnerability. Without exposing yourself to be vulnerable, you will never grow as an artist."

"With the development of the musical genre we are faced with the problem of a lack of professionals," said musical producer and head of Stage Entertainment Dmitry Bogachev in a written statement to The Moscow Times. "Our collaboration with The Broadway Dreams Foundation training program helps experienced artists raise their skills to the next level, and for novice actors to move into the profession."

Victoria Kanatkina is Russian performer who is experiencing just this. Victoria grew up in Tomsk, Siberia — worlds away from the bright lights of Broadway. She began as a dance teacher before making the move to Moscow and pursuing her dreams. "It's been wonderful to work with these professionals from New York," she told The Moscow Times. "It's very important for my professional development and growth." Victoria will play take the role of Sally Bowles in "Cabaret" on Monday.

Can director Stafford Arima offer any advice to aspiring young performers who hope to be involved professionally in the performing arts one day? "I would say that no matter what you want — to become a theater director, actor, dancer or choreographer — if you have a passion for the arts you must never give up. It's incredibly difficult business, but if you have the passion for it you must never give up. Maybe you'll get 15 rejections. But the 16th time, you'll get the part."

The concert season is heating up like the weather and we had hard time choosing the best gigs this weekend. There's something for everyone, from new...
news

Amateur dramatists and musical fans will have a chance to hear advice and encouragement from Broadway directors, choreographers and actors this Monday...
the word's worth