Russia's cultural heritage is most renowned for its influential literature, tradition of dance and powerful classical music. But when you visit the Kremlin Armory Museum, you recall that Russia's artisans and artists have excelled in many art forms. Cases upon cases of brilliant stones, filigree gospel covers, engraved jam pots and Faberge eggs are overwhelming in their lavishness and beauty. What about the tradition of Russian jewelry design? Where are the multicolored precious stones, fine woven gold, enameled silver and intricate bead work?

The Dawn of a New Era

While jewelry design in Russia may have undergone something of a hiatus, it is making a comeback — at least with one designer. The new master of jaw-dropping jewelry is Ilgiz Fazulzyanov, a Russian jeweler who was declared "Champion of Champions" at the International Jewelry Design Excellence Award Competition in Hong Kong for the pendant "Bullfinches" (2011) and later for the earrings and ring set called "Butterflies" (2014). Fazulzyanov is the only jeweler in the world to hold two top awards at this competition.

Both of these pieces will be on display until the end of July at the Exhibition Hall of the Assumption Belfry on Cathedral Square in the Kremlin. The collection features over 150 individual pieces as well as Fazulzyanov's drawings and sketches which are, in themselves, impressive works of art.

How big an honor is this? "Jewels Inspired by Nature" is the first solo jewelry exhibit at the Moscow Kremlin Museums since Pierre-Karl Faberge in 1917. 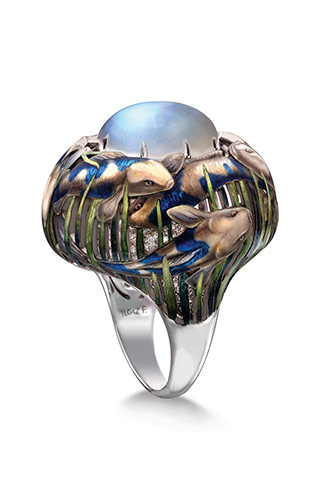 The exhibition is being held with the support of Swiss watchmakers Bovet. In the 19th century the house's founder, Edouard Bovet, entrusted the most skilled enamellers to create Bovet's clock faces. Pascal Raffy, the current owner of Bovet, is passionate about preserving the techniques that made Bovet timepieces among the most coveted in Europe. In 2013, the Bovet house sought to form a partnership with Fazulzyanov based on the high quality and unique nature of his creations.

Raffy told The Moscow Times that the house "[does] not seek to keep up with globalization or mass production, but looks for uniqueness, emotion, delicacy, patrimony, sensibilities and traditional values." And that, says Raffy, is what he saw when he walked into Fazulzyanov's atelier for the first time in 2013. "Destiny is when you spend three minutes with a person and you realize you share the same values. This is what happened when I met Ilgiz. It was destiny."

This meeting took place almost by chance in Geneva. One day in a hotel, Raffy a showcase featuring a piece from Fazulzyanov's collection and was struck by its difference from any other pieces created in the 21st century. "You always say that enameling and engraving is an art that comes from beautiful Switzerland. So I thought: Who is this artisan coming from Russia? I asked to meet him and it was the right thing to do!"

Fazulzyanov has created a collection of watch faces for the house of Bovet using traditional enameling techniques. The series entitled "Dials Inspired by Nature" features both women's and men's watch faces that draw on the themes of nature and the story of "The Horsemen of the Apocalypse." Two of these exquisite timepieces are on display alongside his independent work at the current exhibition.

From Kazan to the Kremlin 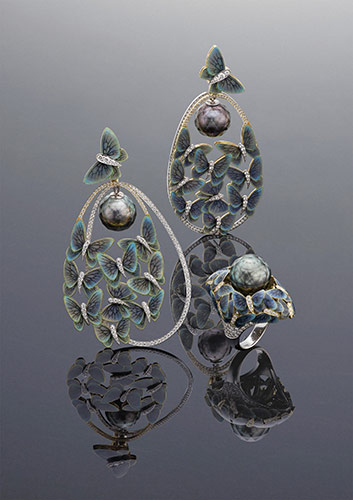 From his humble beginnings in Kazan to becoming the first living jeweler to sell work at the Christie's jewelry auction, Fazulzyanov has had a meteoric career. Named "the champion of enamel" by Madame Figaro magazine, Fazulzyanov's rapid rise in the world of jewelry design came in the early 1990s, when he mastered the technique of stone enameling.

Fazylzyanov was born in 1968 in the republic of Tatarstan. In 1987 he graduated from Kazan Art School and began producing designs for showcases from stained glass and batik. It wasn't until 1991 that Fazulzyanov began dabbling in jewelry design. Despite the difficulties of studying this particular craft at the time, Fazulzyanov persevered and taught himself through trial and error. He opened his first workshop in Kazan less than a year after deciding to begin designing jewelry. Initially he took inspiration from his roots, producing fine filigree jewels in the Tatar ethnic style. In 1994 he came home with the grand prize from the First International Islamic Artisans-at-Work Festival in Islamabad for his binding of the Quran.

In 1997 he began employing the technique of enameling that would become his trademark. In 2002 he registered his own international trademark — Ilgiz F. The following year he established his workshop in Moscow and moved to the city along with his family. Fazulzyanov's pieces have been acquired by museums and private collections in Russia, America, Italy, Great Britain, Japan and in many other countries. And the Moscow Kremlin Museums have five pieces in their permanent collections.

If you love artistry and opulence, this is a show that you cannot miss.