It's a short walk from the Bulvar Rokossovskogo metro station, the last stop on the red line. I look for the Alphaplastika plant on my phone maps app and follow directions. I tell the guard at the checkpoint the password and he lets me go through the turnstile. It's dark, bumpy and very slippery; I'm walking on black ice.

It's obvious that the territory has not been properly cleaned for ages. Dark figures scurry about. I turn towards a large awning, as instructed. Two suspicious looking men are laughing over a cigarette. There's only one door, so I push it open.

It's so bright compared to the outside that I have to blink several times before I can see anything. Several young women wearing masks are carving something from a piece of cardboard using electric tools. I raise my eyes and see the structure they're working on. It's huge and takes up the entire space, from the floor and all the way to the ceiling. One of the women asks me what I'm here for, and when I respond, she shouts out "Syoma, there's someone here to see you!" 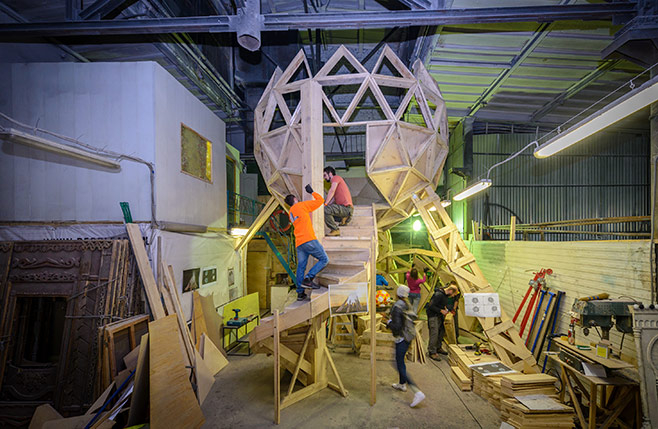 Building the egg. After building it in a warehouse in Moscow, it will be taken apart and shipping to the site of the regional Burning Man in Africa.

Syoma comes out of the structure wearing scruffy jeans and an old hoodie, a walkie-talkie hanging on his belt. Together with Alexander Mironov, Syoma Payain founded an artists' group called Own Way. They first built structures for Burning Man, the famous annual festival in Nevada desert, their most successful being "The Cradle of Mir" in 2013. Then Own Way started making art works for various other festivals, both in Russia and abroad. "This one is for Africa Burn, a regional event of Burning Man, that will take place at the end of April, not far from Cape Town in South Africa," Syoma tells me. "It's a smaller festival. We applied for a grant and won." We walk around the structure.

"The theme for Africa Burn this year is X. We thought we'd create an egg held up by several hands. We pictured it at the moment when it starts cracking, the moment of birth, the X point. That's why the sculpture is called "Moment."

"Let me show you one more interesting thing about that egg," says Syoma and we climb up the ladder leading to the top of the structure. He points out the inner spherical structure: "Just like a real egg — we have the white and the yolk. And here you can actually enter the yolk and sit inside the egg."

Once the structure is complete it will be disassembled and shipped in a container to Africa. Own Way just started a fundraising campaign to cover the cargo expenses at indiegogo.com.

The New Tretyakov Gallery on Krymsky Val has filled its central exhibition space with 160 works by Gely Korzhev — a painter who has been named one...
news

Muchnik's Picks: Zemfira, Billy's Band and More Music in Moscow on the Weekend

Spring has finally sprung in Moscow, and it's April Fool's Day weekend. Time to get out of the house, goof around and go to a gig in the evening...
news

On May 15, 1935, the most beautiful metro in the world opened. And today, nearly 81 years to the day later, the Shchusev Architecture Museum is celebrating...
weekend kitchen