The year is 1941, and hundreds of miles from Germany, Nazi armored divisions gather speed along newly-frosted soil. They are almost within striking distance of Moscow, the Soviet capital.

Eventually, the charge is halted before the city by a series of bloody, desperate battles. Famously, 28 members of the Red Army's 316th Rifle Division were reported wiped out as they blew up 18 German tanks to help scupper the Nazi advance.

The sacrifice of the 28 "Panfilov's guardsmen" became a Soviet symbol. Streets and monuments across the country were dedicated to the men. They were immortalized in Moscow's city anthem. In schools, children memorized the soldiers' names.

But last year, the story itself became a battleground. Sergei Mironenko, the longtime director of the Russian State Archive, denounced the tale as a fake, and published documents to prove it. The heroic 28 had been invented by a war journalist, the documents showed. Moreover, the Soviet authorities uncovered the fiction, but buried the evidence.

In the storm that followed the revelation, Vladimir Medinsky, the Russian culture minister, attacked Mironenko. A head archivist should confine himself to handling documents, he said, and leave the interpretations to others.

In mid-March, Mironenko was demoted. The 65-year-old historian told The Moscow Times in an interview that he had wanted to change positions. But many of his colleagues have bristled. They say that Mironenko fell victim to a new official approach to history, of which Medinsky is the chief advocate.

Whatever the truth, Mironenko's exit marks the end of an era. His 24 years in charge of the state archive spanned modern Russian history. He arrived as an explosion of openness swept away the Soviet Union; he leaves amid fears that an increasingly nationalistic and authoritarian Kremlin is seeking to suppress uncomfortable truths in Russian and Soviet history.

Mironenko watched the U.S.S.R. start to unravel as a historian at the Soviet Academy of Sciences in Moscow.

He remembers being bored by most of his Marxist colleagues, who dogmatically stuck to outdated ideals. Mironenko could see that those ideals were crumbling. Dissident Soviet culture had used Mikhail Gorbachev's reform attempts to take over the mainstream and demand access to the secrets hoarded by the communist bureaucracy.

Slowly, Mironenko witnessed how the secretive apparatus loosened its grip. Books were published that had been censored for decades, and the nation learned the true extent of Joseph Stalin's repressions and prison camps.

The public wanted knowledge, and Mironenko was on a mission to provide it. Appointed head of the new Russian State Archive in 1992, he rushed to get as much information as possible into the public sphere, working with journalists, arranging exhibitions and releasing catalogues. He made hundreds of short television programs, each dedicated to a document. The point was to put Russians face-to-face with facts. "Less commentary, more document," Mironenko said. "Let the document speak for itself."

He began to oversee a mass declassification. In 1992, some 40 percent of the files in the state archive were marked "secret." In 1993 alone, more than 300,000 documents were to be declassified. It was "an archive revolution," Mironenko said. 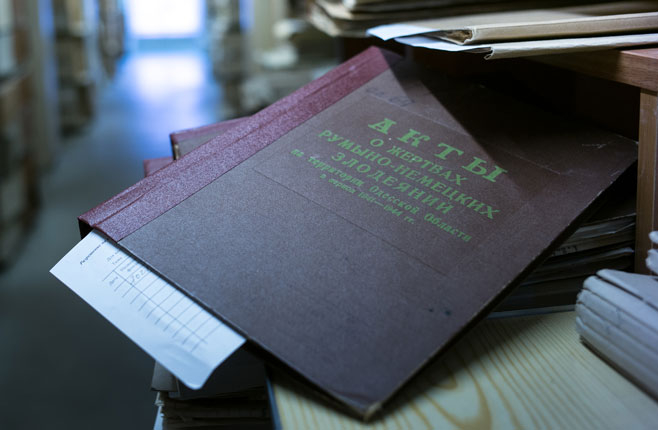 But ending secrecy was easier said than done.

One problem was that declassification was driven from the top. In the early 1990s, a law was passed that would declassify every document older than 30 years. But the process was not automatic. "Millions of documents had to be looked at and given expert opinions before they could be released," says Nikita Petrov, a historian.

However, the experts giving their opinions were from the very offices that had created and stored the documents in the first place. They were used to secrecy, and they received bonuses for working with classified information. "There was a constant war with those experts, who were simply unwilling to open all the documents," says Petrov.

Then the regulations began to tighten. In 1993, a complex new declassification procedure replaced the previous system, under which an archive could declassify a document on its own authority.

In 1996, a "commission for guarding state secrets" was put in charge of declassification. The name revealed the change in direction, says Petrov: "This commission had been responsible for keeping today's secrets, and then they were asked to reveal yesterday's. Mentally, they weren't ready for that."

Meanwhile, some state agencies refused to play ball. Yeltsin had corralled all the country's archives under the umbrella of Mironenko and the Russian State Archive, but the Foreign and Defense Ministries, along with the Federal Security Service (FSB), the successor agency to the KGB, decided not to cede control. After handing over a trickle of files early in the decade, by the mid-1990s they stopped.

As resistance to declassification solidified, an ideological basis appeared to support it. Officials began asking questions: What sort of history do we want to see? A heroic one or one that is full of crimes?

This was a kind of question for which the Yeltsin government was unprepared. The liberals who ascended to power in the 1990s thought they had won the argument, says Petrov. They thought their conclusions about the value of freedom and openness were self-evident.

They turned out to be wrong. The chaos and poverty of the Yeltsin period bred distrust in democracy and the government. Demand for history was largely sated in the early 1990s, says historian Alexei Makarov. Journalists — the buffer between historians and the public — gradually stopped writing about the past. Reconciliation with the crimes of the communist period had only been skin deep. As the reality of the Soviet past receded into history, myths and nostalgia reasserted themselves.

When Vladimir Putin became president in 2000, he quickly articulated the changing mood. "The Kremlin suddenly began to announce that Russia (and the U.S.S.R.) had had bright periods of history and dark ones, and there was no need to focus only on the dark," says Petrov. The call for bright spots was quickly answered, and the heroic battle against the Nazis was reenergized as a symbol of Russia and a justification of Soviet rule.

Tales such as that of Panfilov's guardsmen were stressed. Things like Stalin's failure to anticipate the Nazi attack, the secret pact with Hitler in 1939 and violence committed by the Red Army in eastern Europe were not.

Vladimir Medinsky, a politician and  author of popular history books who was appointed culture minister in 2012, is the apogee of this obscurantism, says Petrov. Historian Askold Ivanchik summed up Medinsky's attitude to history in a talk hosted by Open Russia, a non-government organization: "Historical truth isn't important … We should relate to heroic feats during the war in the same way the church relates to the lives of saints."

Medinsky has huge influence over Russian arts, culture and history, distributing funding and setting the tone. Under him, the Culture Ministry has financed and promoted a steady output of patriotic films and exhibitions, many centered on World War II. One of these, due for release later this year, is about Panfilov's 28 guardsmen.

Makarov is scathing about the strategy: "The authorities are relying on a glorious version of history because there's nothing else to rely on." 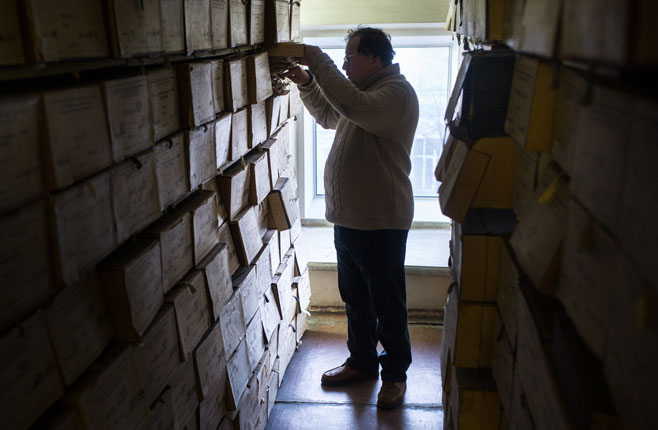 Apathy toward history suited the guardians of secret information perfectly. Without real public pressure, they continued to block attempts at openness.

Now, only around 5 percent of documents in the Russian State Archive are "secret" — roughly in line with a global norm of about 4-5 percent, according to Mironenko. But that doesn't include the classified storehouses of the security, defense and diplomatic services. It is unclear how many documents they hold.

The 30-year declassification rule is routinely ignored. The fight for openness has moved to the courts, but they often refuse to release documents. Petrov in 2010 lost a court battle to access papers from the late 1940s that held neither state secrets nor names. He thinks the authorities don't want to set a precedent that would limit their control over their information.

The security services have claimed that those named in historical documents might be at risk of reprisal attacks — despite a lack of such cases. They have also said, according to Makarov, that the papers could reveal methods that are still in use — an odd argument, as it seems to suggest that the Russian security services still work like Stalin's secret police, the NKVD.

The result is that Soviet history remains partially obscured. Full details of communist foreign policy are still secret, including efforts to sabotage and subvert the Western imperialist order in the early and mid 20th century, according to Petrov, a specialist in the Soviet security services. A blackout has been imposed on the Communist Party's secret support for terrorist groups in the Middle East and Latin America, he adds, and some evidence of how the Red Army consolidated its control over Eastern Europe during its defeat of the Nazis is hidden.

Historians still cannot draw a line under the murders of 20,000 Polish officers in 1940 at Katyn — the government in 2004 classified the results of its 1990s probe into the massacre and stopped providing official confirmations of individual deaths.

Whether for propaganda reasons or to avoid precise allocation of blame, authorities don't seem interested in full disclosure.

All of this made the argument over Panfilov's 28 guardsmen inevitable, says Petrov: "The country is changing. The views of the ruling elite are changing. Mironenko isn't changing."

Mironenko is now head of research at the Russian State Archive. His verve to widen access to historical documents is undimmed. In fact, within the archives under his control, the number of available documents continues to expand, and recent publications include tomes on subjects including Stalin and Russian collaborators with the Nazis.

"The picture is varied," he says. "It shouldn't all be painted in this depressing light."

And yet, part of Russian society simply does not want to know its own history. Mironenko offers his analysis of the problem. "Why, for example, is there such fondness for Stalin? The point is that people don't understand what Stalin is. They have forgotten those times. A vote for Stalin is just a protest. It's a protest against corruption, unjust courts, bureaucratization. People naively think: If only Stalin were here! He'd show you cursed bloodsuckers what for!"

He is ruthlessly indifferent to any damage he inflicts on misguided world views. When an interviewer from the Kommersant newspaper said he had grown up thinking of Panfilov's guardsmen as heroes and did not want to change his opinion, Mironenko replied simply.

"I don't care what you want", he said. "There are historical facts backed by documentary evidence, and let psychologists deal with the rest."