Pour the Guinness, pull out your green top hat and practice saying "Ah, it'll be grand." That's right, Irish Week is upon us, and Moscow is bursting with events to celebrate the Emerald Isle. This is the fifth time Irish week has been held in Moscow, and the celebrations hold a special significance this year, since 2016 is the 100th anniversary of the Easter Rising that triggered the War of Independence and eventually led to the establishment of the Irish Free State.

Alongside the musical and dance festivities of Irish Week, the Karo 11 Oktyabr Cinema on Novy Arbat will be hosting the 9th annual Irish Film Festival. All films will be shown in English with Russian subtitles. Many of the films in the festival will be premiering for the first time in Russia, including the Academy Award nominated Canadian-Irish film, "The Room." Other highlights include "Brooklyn," "Pursuit" and "Michael Collins."

For more than 20 years, Moscow's Irish community and Irish enthusiasts have been celebrating St. Patrick's Day by participating in an enormous parade, this year through Sokolniki Park. Don your greenest outfit, get your friend to draw a wonky shamrock on your cheek and enjoy the music, dancing and carnival atmosphere this Saturday. Musicians and dancers will lead the parade, which is expected to attract up to 15, 000 participants.

If you're not too exhausted after the merriment of the parade, head to the biggest party of Irish week — St.Patrick's Day & Night. This enormous 8-hour music marathon gala festival is a veritable explosion of Irish music and song: folk and rock music, traditional Irish dancing, theatrical performances and video art. Performers include legendary Irish band Beoga, who were nominated for a Grammy in the "best contemporary world music" category, and Tintal, a Moscow-based folk and rock band whose musicians like to wear kilts and play bagpipes. 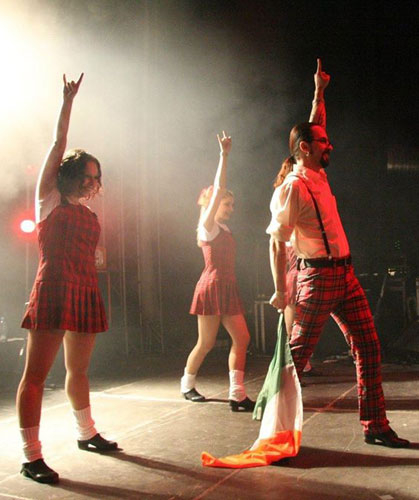 Prepared to be wowed

Dance Irish is a unique concert which will allow you to immerse yourself in the world of Irish music and impossibly fancy footwork. For the first time, soloist dancers Fiona Stone and Peter Wilson, who have starred in both RiverDance and Lord of the Dance, will perform onstage alongside Irish folk group Beoga. They will be joined by performers from Russia's leading dance schools for the program.

Several free interactive workshops will be held as part of Irish Week across the city. From trying your hand (or foot) at Irish dancing, attending a lecture at one of the city's bookshops or even playing some Gaelic football, there's something for everyone to enjoy. See the website for a full list of events and locations.

As we say in Russian, "the weather is whispering" to stay inside, but that will be hard to do with all the incredible gigs happening this weekend,...
news

In a rare instance of an English-language theater performance in Moscow, the Meyerhold Center (TsIM) is staging "The Maxims of Peter Pockets," an adapted...
news

Russians’ Favorite Writer? The Winner is…

The Levada Center has recently published the results of a nationwide survey asking Russian citizens to name their favorite writer.