Sergei (not his real name) was more than 700 meters underground when the blast came. The next thing he knew, he was lying on the ground, dizzy and disorientated: "You couldn't see a thing, it was hot and it was becoming impossible to breathe."

In the dark, Sergei fumbled around for a rail, and began crawling towards the exit. "I didn't feel strong enough to make it, to be honest, but I decided to crawl until the end," he told The Moscow Times.

Sergei was eventually rescued from the stricken Severnaya mine in Vorkuta, a city beyond the Arctic Circle in Russia's Far North, on the night of Feb. 27. He emerged from the ground shortly after the third explosion.

A few hours later, authorities officially stopped the rescue operation. None of the 26 miners left underground could have survived the third blast, they argued. Given that five rescuers had already died in the course of the operation, it was simply reckless to continue.

Although the investigation is still ongoing, officials have already voiced their version of what happened. Several days after the tragedy, Alexei Alyoshin, head of the industry watchdog Rostekhnadzor, reported to President Vladimir Putin that an "anomaly" in the coal layer was to blame. It caused an abrupt spike of methane levels and this led to explosions, he said.

Before the tragedy, said Alyoshin, the situation in the mine was under control: It was constantly inspected, mining never stopped because "there was no danger for the workers," and detectors usually showed "methane levels were below average."

At the same time, miners and their families have claimed that managers must have been aware of the danger of a gas explosion. For more than three weeks prior to the accident, miners had voiced concerns over the level of methane concentration being high enough to cause an explosion.

"Every day my husband came home from work and told me there was too much gas," Viktoria Prasolova, the widow of miner Roman Tila, who was killed in the Vorkuta mine, said. "They were working on the edge of life and death."

Nobody Likes a Quitter

Natalya Tryasukho, who also lost her spouse in the accident, said her husband had a portable gas level analyzer, and it "went off all the time," showing excess levels of methane. She told The Moscow Times that her husband and his colleagues had complained to management, but to no avail. "'If you're not happy with something, quit,' they were told," she said.

Despite the concerns and obvious dangers, quitting was not a real option for most of the men underground. In Vorkuta, mining is the only job that guarantees a decent income. "A lot of people are saying now that the miners were aware of the risks and endangered themselves knowingly. But what are the options? We've got kids to raise," the widow said.

The Moscow Times asked Vorkutaugol, the company that owns the mine, to provide details on the way it dealt with complaints. The company did not respond directly to the question, but said that "systems had not detected high levels of methane in the mine" prior to the tragedy. These systems automatically shut down mining equipment if gas concentration exceeds permitted levels, the company spokesperson said. "Today no one can force miners to work if there are risks," Vorkutaugol's technical director Denis Paikin added. 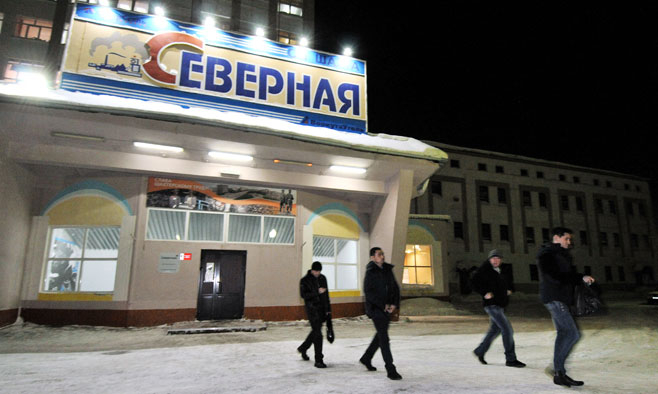 Miners in Vorkuta had been notifying management about excess methane levels before the explosions — to no avail.

However, company safety systems sometimes fail to pick up on high methane levels. "Such system detectors can be located in a place where the ventilation is better — hence lower gas levels," says Alexander Sergeyev, chair of the Independent Mining Union and a former miner himself. "The concentration of methane is significantly higher in the segments where workers mine the coal — that's why their portable detectors showed higher, and more worrying counts."

After a similar tragedy in a Siberian mine in 2010, which killed 91 people, authorities passed a law requiring the degassing of coking coal mines. In theory, this should have eliminated the problem of excess methane in the mines, says Sergeyev. But current protocols on degassing allow mine management to degas only in certain cases, and, even when implemented, there is no guarantee that it will be done properly. "The main question is how effective degassing was," Sergeyev said.

The Price of Life

The Vorkuta accident was far from Russia's first. Over the past two decades, methane explosions have happened every three years on average, claiming dozens of lives. Investigations often reveal that mining continued despite concerns over elevated methane levels. In some cases, miners were forced to continue to mine; in other cases they were motivated by concerns over salary, which depended on the amount of coal they mined.

That said, Sergeyev believes a great deal has improved in the last six years. Fines for violating safety rules have been increased; new technologies have been implemented. "Still, tragedies like this one show that we still have work to do," he said.

In the meantime, the families of miners killed in Vorkuta mourn their losses. Government officials have promised to pay compensation of up to 5 million rubles ($67,500) to each bereaved family. But the mining community of Vorkuta fears that no one will actually be held accountable for what happened.

"In 2013 an explosion in another Vorkuta mine resulted in deaths, too. But the man responsible for safety wasn't charged — they just transferred him to work on our mine," Sergei told The Moscow Times. "Once the media storm around the accident dies down, we will likely be thrown under the bus."

Dozens of miners in the Khakassia region of Russia's resourch-rich Siberia have gone on hunger strike in protest against unpaid salaries.
news

Mine Collapse in Northern Russia Kills At Least Four

At least four miners were killed after a structural collapse at coal mine in northern Russia, and the rescue operation was complicated by a second explosion...
news

A methane leak caused a new explosion Sunday in a coal mine in northern Russia, hitting a section where 26 workers had been trapped after a previous blast...
legal assistance