"It's theater. We were just playing."

That's how Boris Mezdrich, his tone simultaneously apologetic and defiant, described the avant-garde production of Richard Wagner's Tannhäuser that got him fired.

"Blasphemy!" — was what the Russian Orthodox activists shouted as they protested outside the State Opera and Ballet Theater in Novosibirsk, the Siberian city where it was staged.

For Russian Culture Minister Vladimir Medinsky, the opera was sufficient cause to personally sack Mezdrich, the theater's managing director, earlier this year.

But for Russia's cultural elite, it heralded a year of what it considers a state-sponsored war on progressive thought, fueled by religious conservatism and spearheaded by Medinsky himself.

The past year has been "one of the most dramatic periods in the history of post-Soviet Russian culture," Irina Prokhorova, a leading Russian culturologist, told The Moscow Times.

'Blasphemous' Film Within an Opera

The Novosibirsk opera's staging of Tannhäuser featured a filmmaker who depicted Jesus Christ's early years filled with carnal pleasures before he chose a life of moral suffering. In the opera, a poster for the film  showing a crucifix lodged between a naked woman's open legs  sparks outrage and leads to its maker being expelled from town.

In real life, it ignited a wave of protest from Orthodox activists. Novosibirsk's Church elder, Metropolitan Tikhon, called upon believers to join several protest rallies outside the theater, arguing it would be a betrayal of Christ not to do so.

He also filed a complaint with the prosecutor general's office against Mezdrich and Timofei Kulyabin, the opera's director, claiming the production had insulted the feelings of religious believers — an offense punishable by up to three years in prison.

The legal case against the theater's staff was dismissed by a local court in March, citing a lack of evidence.

But Medinsky that same month fired Mezdrich and replaced him with Vladimir Kekhman, the artistic director at the Mikhailovsky Theater in St. Petersburg and a suspect in a multi-million-dollar embezzlement case.

Known colloquially as the "Banana King" for a fortune made importing fruit, Kekhman had publicly denounced Tannhäuser.

Unsurprisingly, the new appointee immediately struck the production from the theater's playbill. 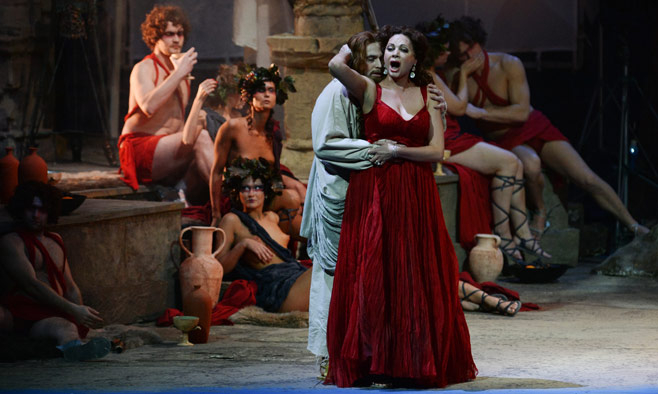 For the Russian art world, the Tannhäuser uproar seemed to condone ultra-conservative activism that has grown recently and continued to make headlines.

In August, Orthodox activists vandalized an exhibit that included a piece of art by the acclaimed sculptor Vadim Sidur at Manege — one of Moscow's most prominent exhibition spaces.

The exhibit's curator, Vera Trakhtenberg, told The Moscow Times earlier that Sidur's works had been on display in a separate museum for 20 years — with no incidents.

But the activists, led by self-proclaimed "missionary" Dmitry "Enteo" Tsorionov, yelled that the works on display were offensive to believers and therefore illegal.

Enteo had earlier also thrown a pig's head — marked with theater director Oleg Tabakov's name — at the doors of the Chekhov Moscow Art Theater in protest against an Oscar Wilde comedy.

Tannhäuser was also the first time since the collapse of the Soviet Union that the director of a state-owned theater was fired on ideological grounds.

Liberal art circles took the scandal as a symbolic gesture and a warning.

"It is enough to crack down on one independent theater, for all the others to be afraid," said Yelena Kovаlskaya, art director of the Moscow cultural Meyerhold Center. Her center is one of a small minority of theaters and concert halls not owned by the state.

Many feared that the Culture Ministry was returning to the Soviet-era practice of having a so-called khudsovet — or artistic council — vet the ideological content of productions before they were allowed on stage.

Medinsky said in a recent article in the Izvestia newspaper that Tannhäuser should never have made the playbill and "should have been rejected at the idea phase."

The fears received new impetus when the Russian Union of Theater Workers in October announced the makeup of the jury of Russia's most prestigious theater prize, the Golden Mask Awards.

Critics accused Medinsky of having personally placed pro-Kremlin figures in the panel, including a theater critic infamous for her tirades against Tannhäuser and the works of prominent contemporary theater directors.

The head of Moscow's Gogol Center, Kirill Serebrennikov, and fellow theater director Konstantin Bogomolov declared a boycott of the awards. Almost 100 theater critics from all over the country signed an open letter to Medinsky, demanding a jury that did not "arouse suspicions of ideological tendentiousness and bias."

In a reply to the protest, the theater union said in an online statement that, as an organizer of the awards, the Culture Ministry had the right to "participate" in the panel's makeup.

Bogomolov declined to comment on his boycott to The Moscow Times, adding that his relationship with the authorities was non-existent, "and thank God for that." 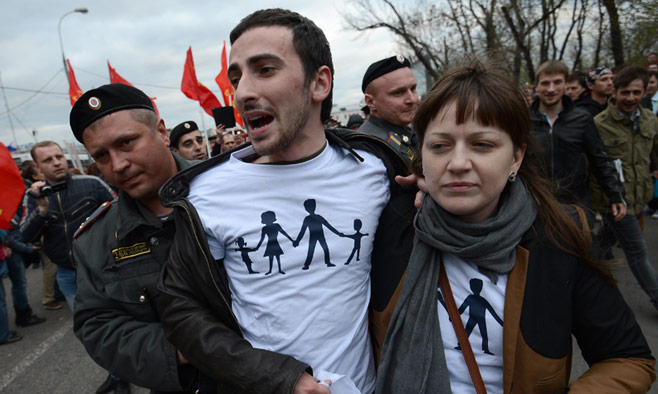 Medinsky has defended his ministry's moves as protecting a largely conservative Russian society from an elite group of rebellious liberal intelligentsia.

In his article in Izvestia, Medinsky cited a poll by the state-run Public Opinion Foundation (FOM), in which 82 percent of respondents said "the government should control the content of art."

"We cannot and will not ignore the opinion of the majority of our compatriots," he wrote, adding: "The non-traditional artist conducts experiments on the souls of thousands and thousands of people."

Medinsky has consistently pushed for patriotism in culture, founding initiatives such as military youth camps and calling for the creation of patriotic media.

In fact, under Medinsky's leadership, Russia's cultural scene has fallen within the ideological sphere of the government, guided by a combination of conservatism and isolationism, Prokhorova said.

In April, the Culture Ministry banned the screening of the Hollywood film "Child 44" — a thriller centered on the hunt for a child murderer in 1950s Stalinist Russia.

Medinsky said the film had "distorted historical facts" and accused the filmmakers of depicting the Soviet Union as a land of "physically and morally defective subhumans."

Earlier this year, prominent art gallery owner Marat Guelman was expelled from his gallery at the Winzavod art center in Moscow after hosting a charity auction for political prisoners in Russia, including people arrested at anti-Kremlin protests in 2012.

"It was pointless to pressure me, so [the authorities] pressured Winzavod," Guelman told The Moscow Times in written comments.

The independent theater Teatr.doc has also been evicted several times — most recently after law enforcement officers unexpectedly attended a rehearsal of a play about the imprisonment of Russian protesters.

Using the rhetoric of supply and demand, Medinsky has described state-funded art that conflicts with "Russian values" as a waste of taxpayers' money.

"Let a hundred flowers bloom, but we will water only those that are useful to us," a policy outline published by the Culture Ministry last year cited Medinsky as saying.

The film "Leviathan," which shows a corrupt local mayor who abuses his position to crush his opponents — interpreted by some as a commentary on life under Putin — was partially funded by the state.

Directed by Andrei Zvyagintsev, the film was embraced abroad, receiving an Oscar nomination and winning a Golden Globe. But Medinsky was not amused.

"Films focused not only on criticism of current authorities but openly spitting on them ... filled with a sense of despair and hopelessness over our existence, should not be financed with taxpayers' money," he said at the time.

Zvyagintsev told The Moscow Times he wanted nothing to do with Medinsky or the Culture Ministry.

"This figure is so unpleasant that I don't even want to talk or think about him," he said.

Vitaly Mansky, organizer of one of Russia's largest documentary festivals ArtDocFest, said the ministry's funding policy dictated:"Whatever we order, you should produce."

Mansky — whose festival Medinsky said would "never" again receive state support because of its "anti-state" programming — said denying state subsidies would be "a death blow to 99 percent" of independent film festivals in Russia. 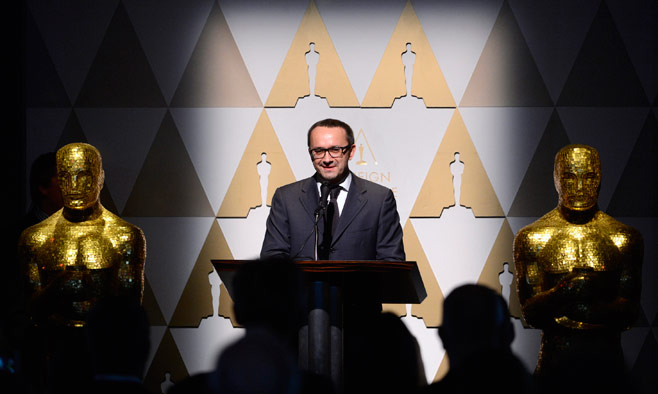 Despite the high-profile incidents, non-traditional art in Russia continues to exist and at times appears to operate free from constraint.

Dmitry Ozerkov, curator of the 20/21 contemporary art project at the Hermitage museum in St. Petersburg, told The Moscow Times he had not experienced any pressure from the public or authorities — even when the museum put on display provocative artworks on homosexuality and Russia's role in Ukraine.

Kovalskaya, of the Meyerhold Center, said people were often surprised at her center's sharply Kremlin-critical performances.

But, she added, the threat of closure hung over all independent art institutions.

"If they want to close down Meyerhold, a hundred [regulatory] violations will be found," she said.

Despite the crackdown, 2015 had been a good year for the Russian arts, Guelman said, "not thanks to the Culture Ministry, but in spite of it."

"This year, the authorities' pressure was enormous, but it did not kill us," he said.

Guelman named as the year's grand finale a stunt by Pyotr Pavlensky, who in November set the doors of the FSB headquarters in central Moscow on fire. "All of Medinsky's attempts to sabotage [the arts] were reduced to zero with this one gesture," he said.

But the pressure continues. Mezdrich is still haunted by the Tannhäuser case, he said. With most theaters in Russia in the hands of the state, Medinsky's firing is a stain on his reputation and he is struggling to find employment.

A public vote recently awarded the staging of the opera a prize for best musical performance. When Mezdrich went to the local municipal museum to hand over the trophy to be put on display, he was met there by Orthodox activists once again.

It was a sign that the Tannhäuser saga is not over. "[The church's] head is reeling with success and its appetite is growing," he said. "This is just the beginning."