When Ruslan Goncharov, 25, refers back to the Stone Age, it is not for history's sake, but as an example of better days.

“Man goes out, kills a mammoth, brings the mammoth home to his wife, the wife prepares it and then saves the leftovers, salts them and so forth.

"The man takes his wife by the hand, leads her to a cave and says: 'This is our cave. We are going to live here. I found it.'

"The woman looks around the cave. It's cold, empty. And says: Here we will make a painting, here we will have our fireplace. Build it, please, darling, the rocks are too heavy.”

Goncharov and Roman Ovchinnikov, 24, two clean-shaven men in slim-fit suits who look like they stepped out of Il Divo, are the founders of the School of Masculinity, a “science-based” training program that promises to turn boys into Russian men.

An educational evening has drawn several dozen parents to a trendy loft in central Moscow. Except for a handful of fathers — one boldly sports a pink silk shirt — the audience is comprised of middle-aged women. Their faces reveal a mixture of concern and guilt.

“Тhe [question of masculinity] is a problem that is really on parents' minds,” Ovchinnikov said.

Russian women surveyed on social media agree that Russian men take on the role of caretaker — they pay restaurant bills, carry bags, hold doors, and will certainly do jobs around the home.

But “these perks come with a collateral hazard,” Valeria, 26, a lawyer who declined to give her surname, said on Facebook. “[Russian men] will inevitably be patronizing — even the best of them. This takes various forms, from not letting you perform simple tasks to barring you from having a social life,” she wrote on Facebook.

Alesya, a communications coach, 33, agreed Russian men were generally dominant. “In the classical situation, a woman cannot decide for herself where to vacation, or independently buy a car. The husband will participate and control everything,” she said.

Russian men are more prone to alcoholism than women, an OECD health survey earlier this year showed — and domestic abuse is not uncommon.

The School of Masculinity made no mention of that troubled reputation.

Masculinity is the “ability to move forward regardless of fear, pain or other obstacles,” Goncharov said. That ability, the trainers told the parents, is under threat. And Russian mothers are mostly to blame.

With roughly 25 million civilian and military deaths, the Soviet Union suffered more casualties than any other nation in World War II.

The death toll, and Russia's high divorce rate, mean many women have raised their children singlehandedly, a phenomenon the School of Masculinity's founders view as the root of today's problems.

“Those women didn't raise men. And these men, who are not men, are now trying to raise the next men,” Ovchinnikov said.

Oleg Chagin, 52, a gruff father of 13 who oversees the “science” behind the masculinity program, summarized it for the audience: “Women raise girls,” he announced.

Chagin, the self-proclaimed head of the Research Institute of Social Anthropogenesis — an institute that does not have an official website — also condemns the use of diapers, alleging they train toddlers to be weak, and says children should study at school standing up.

He claims that in many Russian boys “the male hormone” — an unspecified chemical — is never produced, leading to a condition he calls “gender perversion.”

Mothers are the “ideal manipulators,” always coddling their sons, he said, causing women in the audience to squirm.

“For children to become men, you need to create a stressful situation,” he said. “If a man stops fighting, he turns into a baba [chick], even physically.” 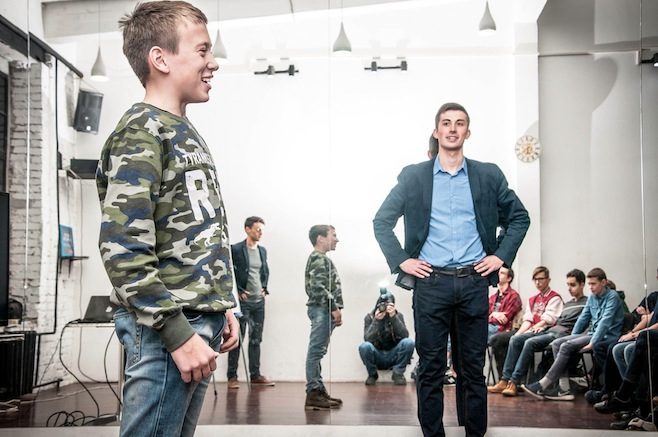 School of Masculinity founder Roman Ovchinnikov watches one of the participants give a speech.

An Army of Men

Chagin and the two budding entrepreneurs co-organized a youth camp this summer at an airborne troops base on the outskirts of Moscow called “Motherland.”

Teenagers dressed in camouflage lived for weeks under a military regime, with morning workouts, knife throwing and laser-gun shooting.

Many Russians believe that time in the Armed Forces strengthens boys —  42 percent of Russians said the army provided boys with training in masculinity and responsibility, the state-run VTsIOM pollster reported this year.

But reports of abuse and hazing have tarnished its reputation. “The army is the right instrument, but it has discredited itself and is not working the way it should be working,” Ovchinnikov, who himself dodged conscription for medical reasons, said.

According to the masculinity trainers, 95 percent of school teachers are female. To combat the overbearing female influence at school and home, the entrepreneurs created a science-based male training camp.

The course includes mental and physical coaching, and, for those with cash to burn, personal guidance from a psychotherapist for both parent and son. The all-male staff teach their pupils gender-specific life lessons on, for example, the concept of responsibility.

“I think you should recognize: this is an oak tree, and this is an apple tree and they need different approaches, and dig deeper than just saying 'these are trees,'” Ovchinnikov said.

“For girls [responsibility] is a practically non-existent issue,” he said. “At first the person responsible for a girl is her father, then later when she gets married, her husband takes over,” Goncharov says, introducing a significant pause between the syllables of the Russian word for “married” — zamuzham — stressing its literal meaning of “behind the husband.”

The gender distinction also applies to the workplace.

“What is a job for a man? It's his path, what he does, his idea, where he wants to go [in life.] For women, what's the ideal job? That place where she is energized, it's not so important what she earns right?” he said.

Russians only need to look to the West to see what failure to recognize gender differences will bring, the organizers said.

“In Europe we see bearded women and other things that are impossible to understand,” Ovchinnikov told the parents, presumably referring to Conchita Wurst, the Austrian cross-dresser whose participation in the Eurovision Song Festival last year caused outrage in Russia.

Traditional gender roles, for the organizers, are about more than values — they are crucial for the survival of the human species.

“If everyone would follow Europe's course then we would die out. We would stop existing. That's a fact,” Ovchinnikov said.

Some of the Russian women questioned by The Moscow Times, however, said Russian men would benefit from a little less gender awareness.

Graphic designer Ksenia, 29, who declined to give her surname, said, “Russian men demand to be loved just because they were born men.”